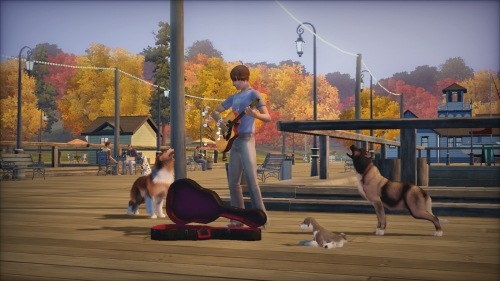 The Sims 3: Pets is a standalone game for consoles.[6] It is released for PlayStation 3, Xbox 360, and Nintendo 3DS.

The game sees a return of pets from The Sims 2: Pets. However, the console version only features cats and dogs.[7]

To cheat the player must press the start button and L1 L2 R1 and R2 (PS3) or LT LB RT and RB (Xbox) and a message will appear asking if you want to enable creation mode. Click yes and the player will unlock a few karma powers along with unlimited karma points and 999,999,999 Simoleons. The player's budget doesn't change if one buys or sells. However consequently the player will not receive any trophies, achievements or challenges with Creation mode enabled. [citation needed]

There are a total of thirty possible pet traits. In Create-A-Pet, each pet can be given up to two traits. Pets can learn up to eleven traits, and they can also "un-learn" them. A few traits cannot be learned. Some traits are unique to one species, and some can be for any species. There are also some traits that will conflict with one another, such as Proud and Playful.

The Sims 3 Pets has its fair share of small issues with certain things. They don't necessarily break the game, but they can be annoying.

This is a list of artists and their songs that are to be featured in Pets:

Retrieved from "https://www.thesimswiki.com/w/index.php?title=The_Sims_3:_Pets_(console)&oldid=950546"
Categories:
Hidden categories:
Cookies help us deliver our services. By using our services, you agree to our use of cookies.