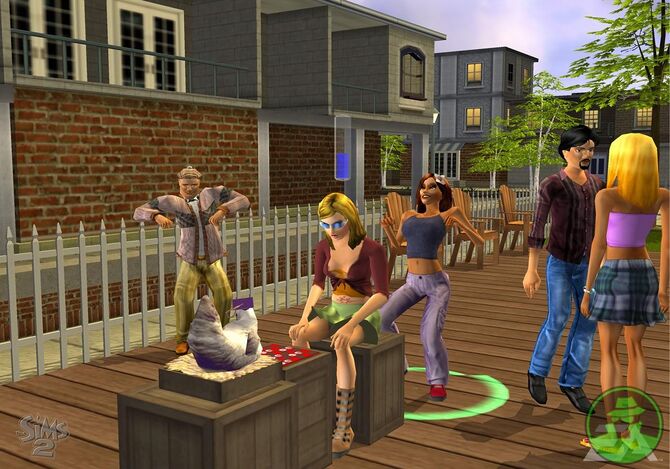 The Sims 2 (console)
Fourth console title in The Sims series

For other versions of The Sims 2, see The Sims 2 (disambiguation).

The Sims 2 is the fourth title in The Sims console series. The Sims 2 was released for the PlayStation 2, Xbox, Nintendo GameCube, Nintendo DS, Game Boy Advance, PSP, and mobile phones in the fourth quarter of 2005. The home console versions (which are the formal three) include a story and gameplay similar to previous versions of the game, while handheld games (the DS, PSP, and GBA) contain their own storylines.

This game lets the player control the Sims directly rather than through point and click movement, which had mixed reactions from fans. The game also carries many things over from The Sims 2 on PC, such as wants, but does not carry over the aging and pregnancy aspect.

Several aesthetic improvements were made, such as meal customisation.

Bands such as Paramore provided Simlish versions of their songs for the game.

In Create A Sim, players can generate and customize the Sims with ample amount of customization options. The game also offers exclusive features and tools that aren't available in the PC version.

Upon beginning the game, the player is greeted with the Main Menu screen. In it the player must pick one of the modes to play in, before starting a new game or continuing with the existing save. Starting a new one will issue a prompt disclaimer of the old game being overwritten if executed. The game can be played either alone or with another player (if the second joypad is connected). Selecting the latter allow the players to jump in playing with preoccupied family, have them be evicted to make room for their Sims, or by moving into one of the vacant houses.

The game progresses much like the other console Sims games: the Sim is given a number of objectives to complete while advancing in their career, and they move from house to house as objectives are completed and the player advances in the story. While the objective in previous console games like Bustin' Out were more career-oriented, the objectives in The Sims 2 not only focus on advancing in a career, but the goals to be completed can also be more aspirational, like buying better stuff, improving a skill, or beating a bully Sim at foosball.

Unlike other games, the player controls the Sims directly with the analogue stick, rather than moving them using the point and click to queue up actions. This gives The Sims 2 gameplay significantly more interactivity and enables the player to control their Sims similarly to an adventure or role-playing game. The option to play using traditional Sims controls is still there, but the third-person control option allows for greater immersion currently exclusive to The Sims 2 console series.

When a Sim enters a conversation with another Sim, the camera zooms in on their conversation and the player chooses their actions from a menu. The background and the Sims themselves differ depending on your Sim's relationship with the other Sim. For instance, if Sims are in love the background will be pink and they will move closer to each other.

Death in the console version of The Sims 2 is rather different from death in The Sims 2 for other platforms. When a Sim dies, they are not lost forever, rather, they remain on the lot as ghosts and can haunt the other residents of the lot, using interactions like "puke" and "possess". They can be brought back to life at any point by bribing the Grim Reaper or defeating him in a fiddle contest.

There is a method of death that no other Sims game has. When a Sim is resurrected via the Grim Reaper, they can go to their grave and dance on it. When they dance on their grave they will automatically be set on fire and die.

Main article: List of lots in The Sims 2 (console)

There are 12 different locations that Sims may travel to across Pleasantview, Strangetown, and Melbourne throughout the course of the game. In order to unlock a new location, the player must complete Golden Wants (basically, a Want that is a mission). In the 2-player mode, only player 1 has Golden Wants.

As a Sim advances through the game, new locations will become available. There are eight main and four small locations in Story Mode, and four others in Free Play Mode.

The first Golden Want player 1 has in Story Mode.

*While some characters are initially "NPCs", it is actually possible to "unlock" them as playable characters. This can be done by becoming either a best friend or lover to the "NPC" sim, and then (respectively) choosing either the "Ask to move in" or "propose" social interaction. If the character accepts, they will follow the player's created Sim to different lots as a sort of companion, and the player can switch between them at any point. There are also two Townies that can appear in Freeplay mode if all other families are deleted. It seems they are used as placeholders to make sure the player still has some visitors. They look like female clones and cannot be married or moved into the home.

Main article: List of songs in The Sims 2 (console)

The game features music performed by artists such as Paramore, Ryan Ferguson and Trivium. They were all recorded in Simlish. The Humble Brothers donated heavily to the game. Below is a list of some of the songs featured in the game:

The Nintendo DS version of The Sims 2 begins with the player's car breaking down in Strangetown. Upon arrival, an anonymous donor grants the player the deed to a hotel which can be operated and customized at the player's discretion.

Your job is to bring life back into Strangetown by encouraging people to come to your hotel. You do this by upgrading it and satisfying your guests. There are several ways in which you can make Strangetown a nice place to warm up in, but it is up to you to find it by making other Sims happy, putting goons in jail, vanquishing aliens, shutting down robots, and doing missions for others.

The Game Boy Advance version of The Sims 2 takes place in Strangetown, and shares a similar GUI to its predecessors (The Sims Bustin' Out and The Urbz: Sims in the City). Players are guided through a goal-oriented game based on the reality television concept in which partitions of the game are divided into "episodes".

The player's Sim is working for Daddy Bigbucks. His most recent scheme to make money happens to be a TV show, with the player being the main character. The player has to complete aspects of the plot in different missions, and gain bonus points at the end of each mission for talking to people badly, nicely, etc., and in the end they even offer the player to choose the people in the town or the player's Sim.

The game begins with the player's character driving through the Strangetown desert, presumably 'Road to Nowhere' in their car, when suddenly a PlumBob flies towards the player and damages the car and causes them to lose control. Fortunately, the player finds a gas station. The player takes their car into the garage. At that point the player takes control. The player is introduced to a vehicle mechanic named Oscar, who after a brief tutorial in teaching the player how to talk to NPC Sims, informs the player their car will only take a short while to fix.

The player is then free to roam around the gas station, and after being introduced to some more NPCs, including Bella Goth, who claims to be abducted by aliens, completing tasks and being taught the basic objective of the game which is 'Secret Hunting' for the store clerk. The player then exits the shop only to find the garage around the back has completely disappeared along with Oscar and their car, with only the foundation of the garage remaining.

The player informs Police Deputy Duncan about the situation who replies that he can do nothing about it and suggests the player find a place to stay. After having bought Bella's house for pocket change and getting donuts for Deputy Duncan, the player finally gets a lift into Strangetown's Paradise Place, only to find more tasks and mysteries.

It is finally known that the Green Diamond appearing throughout the game is a mind-controlling device controlled by an "outside force" (the player). The main antagonist also realize that the protagonist is really controlled by another outside force, just like playing a game. It is unknown if the Green Diamond's role applies to the other Sims games. But it may be possible since when the player changes the active Sim, the other one has free will.

This Sims game features such as traveling to places, getting secrets, and meeting characters from The Sims 2 for PC such as Loki Beaker, General Buzz Grunt, Circe Beaker, Pascal Curious, Lazlo Curious, Bella Goth, and others.

There are also several changes from the PC version:

Early logo of the console version

Retrieved from "https://www.thesimswiki.com/w/index.php?title=The_Sims_2_(console)&oldid=964573"
Categories:
Hidden category:
Cookies help us deliver our services. By using our services, you agree to our use of cookies.