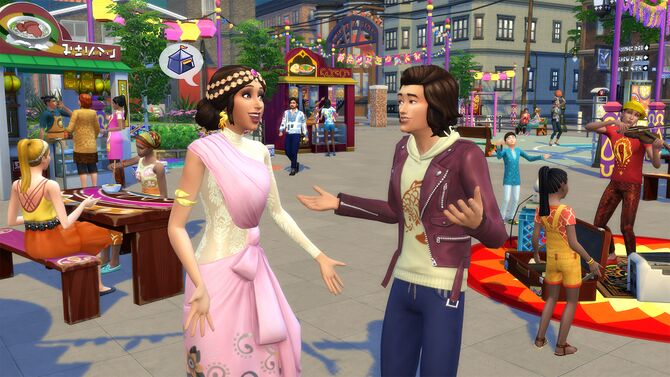 Take Your Sims to the City

Do your Sims long to leave the suburbs behind? Fulfill their dreams in the diverse city of San Myshuno, where they can discover exciting neighborhoods, move into a new apartment, check out fun festivals and more. In The Sims™ 4 City Living your Sims can experience the joys and challenges of sharing close quarters with other Sims. Work your way up from a starter unit to a penthouse as your Sims launch new Metropolitan careers!

Explore the bustling city of San Myshuno. This densely populated city has enough unique neighborhoods to give your Sims plenty to explore. Get creative in the Arts Quarter or sing your heart out at the Karaoke Bar in the Fashion District. Head over to the Spice Market to shoot some hoops, or invite a few friends over to play video games after a long day at the office in Uptown.

Discover lively cultural festivals. Festivals are great opportunities to enrich your Sims. Let them watch street performers, enter competitions and meet a wide variety of folks from every walk of life. Check out the Curry Challenge at the Spice Festival or light fireworks with a hot date at the Romance Festival.

Live in apartments and get closer with your neighbors. Lots of new neighbors mean all kinds of opportunities for relationships, both good and bad. Your Sims might make a new best friend or fall in love, then debate giving them a key to their place. And what about those noisy neighbors and their late night dance parties? You'll need to decide how to handle them - if you can't beat them, maybe you should join them.

Work your way up from starter apartment to penthouse. Choosing the right apartment for your Sims can be a challenge. You'll need to balance the charm of your first starter unit with possible setbacks, like cockroaches, leaky pipes or electrical problems. Help your Sims work their way up to living in a Skyscraper Penthouse, with panoramic views and even a Talking Toilet!

Embark on new, metropolitan careers. There are all kinds of new opportunities in the city so make sure your Sims take advantage of them. As a Politician, your Sims can make dramatic speeches while fighting for a good cause. Maybe they'd prefer a more refined career as a Food or Art Critic. Or they could inspire the masses working in Social Media.

The Sims 4: City Living features a new city world named San Myshuno. It is heavily based on a variety of modern cities from around the world like Tokyo, San Francisco, and New York City, and also features elements of Indian, Chinese, Japanese and Moroccan culture throughout the city. San Myshuno is divided into four neighborhoods—Spice Market, Arts Quarter, Fashion District, and Uptown. San Myshuno has a total of 18 lots with 21 apartment units. 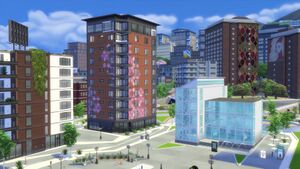 Apartment buildings in the Arts Quarter.

A total of 21 apartment units are available in San Myshuno. Multiple apartments can exist in the same building, along with multiple families and households. Apartment interiors can be heavily modified, but exteriors are not editable.

Apartments offer new gameplay compared to normal residential lots, such as landlords, paying rent, various types of pests and close quarter neighbors. Sims in an apartment complex can knock on the door to yell about noise, they can enter another apartment within the complex albeit through a loading screen, and then see the other apartment and chat with their neighbor. Sims can give trusted Sims the key to their apartment, allowing those Sims to walk into the household apartment anytime they like.

Apartments in San Myshuno also have pre-selected lot traits in them, that can be modified by the player. However, some apartments have special locked traits that can't be removed. This is because some shells have objects (or pests) in them that require these specific traits.

Apartment buildings cannot be added to San Myshuno, and apartments are only available in San Myshuno and Evergreen Harbour. 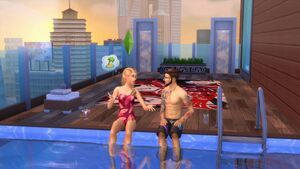 Two Sims chatting on a penthouse.

A total three penthouses are found in San Myshuno. They are placed on top of decorative buildings that do not have any limitations beyond their lot size, so they can be demolished and rebuilt, much like other buildings on a normal lot. Sims in penthouses can't have neighbors as only one household can live in them, making penthouses very private. However, other Sims are able to visit penthouses by using the elevator.

Living on a penthouse lot is not very different from living on a normal lot, but in order to make the penthouse work, the player needs to add an elevator, a recycle bin, and a mailbox. A community lot penthouse also needs an elevator so that Sims can travel up and down the building. Other Sims will visit these lots the same way as they visit normal community lots in other worlds.

Penthouses are not available in other worlds and are only found in San Myshuno. 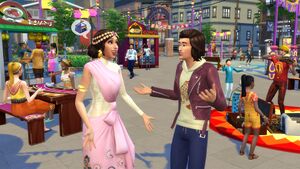 In City Living Sims can now attend different festivals. There are five festivals: Geekcon, Humor and Hijinks Festival, Romance Festival, Spice Festival and Flea Market that take place around the different districts of San Myshuno over the course of a two-week cycle.

In apartment buildings there is a bulletin board, where Sims can read about the festival to see when the next festival is going to take place and what activities, competitions, and schedules this festival has to offer. Festivals can also be read about on dynamic signs located in different parts of San Myshuno.

City Living introduces three new careers: Critic, Politician, and Social Media. Each career track has two career branches. These careers include interactive career assignments, where Sims in these careers have job tasks that take them to various locations around their world.

If a Sim works in one these three careers, an hour before the Sim is going to work, an alarm notification will appear on the phone. There the player can choose to either "Go to Work", "Work from Home" or "Take the Day Off".

If the player chooses to work from home, the game will generate two randomized tasks for the Sim to complete, in order to gain boost to their job performance that is added to the payment received when the day is over. If these tasks are not done by the Sim they were assigned to, the boss will be disappointed and job performance will be lost.

These Sims get Tense around Flirty Sims and seldom get Flirty themselves. It's difficult for them to be Romantic in public.

These Sims will actively avoid eating foods that contain meat products and can become sick if they eat such foods.

Retrieved from "https://www.thesimswiki.com/w/index.php?title=The_Sims_4:_City_Living&oldid=966859"
Categories:
Hidden categories:
Cookies help us deliver our services. By using our services, you agree to our use of cookies.