Every month, The Sims Wiki selects a Featured Article to display on the main page of the wiki. These featured articles represent some of the most informative, well-written and interesting articles that The Sims Wiki has to offer. Community voting and nominations are used to determine which articles are featured.

To view or edit the Featured Article template, click here 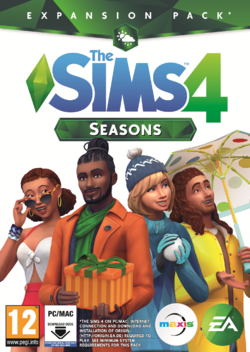 The Sims 4: Seasons is the fifth expansion pack for The Sims 4. It was announced on May 24, 2018 and released on June 22, 2018. The console version was released on November 13, 2018. It is a spiritual successor to The Sims 2: Seasons and The Sims 3: Seasons. The expansion pack reintroduces weather and seasons, along with new features such as holidays and a calendar. Various other features, such as temperatures, new careers and new skills are also included.

The Sims 4: Seasons introduces weather and seasons as its primary core mechanics. The four seasons of spring, summer, fall and winter shape the entire lives of Sims, allowing for new activities, festivities and more. All worlds also have their own unique weather patterns, varying from rain, cloudy, sunny and snowy.

Alongside weather, seasons and temperatures, holidays are another big feature of this expansion pack. They are worldwide events that repeat each year, and each come with their own set of traditions which define the way the Sims celebrate the holiday. There are multiple pre-made holidays, and players are able to create their own or edit/delete the pre-made ones. The calendar, another new feature, includes the upcoming weather forecasts, days, birthdays and the four pre-made seasonal holidays alongside the ones created by the player. Players can add custom holidays, delete or edit pre-loaded ones, or manually replicate them so that they occur on a different date.

The articles listed here are set to be featured in upcoming months. They are added to this list in the order that they were voted upon by the community.

Name is the name of the article being nominated, and reason is a brief explanation of why the article should be featured. Do not change the text for sig or time.

Any user can vote for as many nominated Featured Articles as they wish. All votes need to be signed (using four tildes: ~~~~) in order to be counted, and each user may only vote for each article one time. All votes will last for two weeks. If a nomination has more support votes than oppose votes after voting, it will be placed in the Featured Article queue. Articles will be featured in the order they appear in the queue, and order in the queue will be the order of passage, unless the queue is re-arranged due to a game release or other special event.

Retrieved from "https://www.thesimswiki.com/w/index.php?title=The_Sims_Wiki:Featured_article&oldid=951599"
Categories:
Cookies help us deliver our services. By using our services, you agree to our use of cookies.