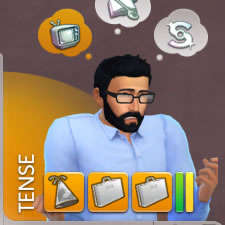 Tense is an emotion available in The Sims 4. It occurs when a Sim engages in mentally frustrating tasks, or has a low Fun motive. Ambitious Sims may become tense if not promoted. Sims get tense when reading a skill book that is too advanced for their skill level. Working Too Hard at work also has a chance of making a Sim tense. Having Writer's Block can make a Sim tense. Fires can make Sims tense. Sims also get tense if a toddler is crying or having a tantrum. A Sim with this emotion can progress to feeling very tense. Carefree Sims cannot be inflicted with any Tense moodlets, and thus, the emotion itself. As of the Parenthood game pack, along with Uncomfortable, children and teens can throw tantrums while tense. Geek Sims will become Tense if not playing video games. Children and Teens working hard at school can also make them tense.

Sims who are tense may have the following Whims.

These traits affect how often a Sim is tense.

No objects have the tense Object Aura as of the latest patch, game pack and expansion pack released.

No careers benefit from the Sim being tense or have it as their ideal emotion.

Retrieved from "https://www.thesimswiki.com/w/index.php?title=Tense&oldid=949594"
Category:
Cookies help us deliver our services. By using our services, you agree to our use of cookies.