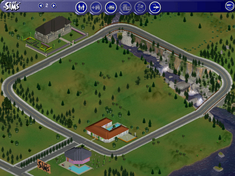 A neighborhood in The Sims series is a place that consists of lots. Initially, neighborhoods were small (10 lots in The Sims base game) and consisted of only residential lots, but later expansions for The Sims allowed community lots to be added. This pattern was continued into The Sims 2, which provided the customization of placing down new and removing existing lots. In The Sims 4, neighborhoods are also known as districts, and are organized together as part of a larger world.

The Sims 3 does not feature the concept of neighborhoods in the same way as other games in the series; instead, gameplay takes place in an open-world where Sims are free to roam anywhere on the map.

Within a neighborhood[edit | edit source]

In The Sims and The Sims 2 Sims travel from one lot to another, with nothing in between. The player will see them leave the lot they are on and disappear, after which a loading screen will appear. The player will not see them again until they reappear on the destination lot.[notes 1] This is the same in The Sims 4, but Sims can also travel to public areas in the loaded neighborhood. Visiting another lot in the same neighborhood, or going anywhere outside the neighborhood, brings a loading screen.

Traveling between neighborhoods, in the sense of being able to go from one to another, then return home, is not possible in The Sims or The Sims 2. While The Sims 2 allows an inhabited lot to be placed in the Lots and Houses bin, and allows that lot to be placed in a new neighborhood, actually doing that is not recommended, as it damages both neighborhoods if any household members had relationships with, or any sort of memories of, Sims or pets outside the household.

There is a technique that makes it possible to have an infinite number of neighborhoods, which involves copying an empty neighborhood folder from the Sims folder in "Program Files" and renaming it "UserData(any # > 8) 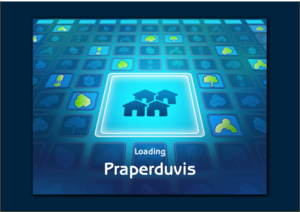 When a player chooses a premade neighborhood from the main menu to play in, the player is greeted with the story mode window that introduces the captured lives of every resided family of the hood. Custom neighborhoods can also come with a story made by a player, though the mode doesn't open by default after entering the neighborhood view.

Players have much greater control of customizing a neighborhood to their liking. After clicking the button labeled as "Lots & Houses", the player can place down, move and rotate or remove a lot. Additionally, the player can decorate the neighborhood with trees, ponds, stones, landmarks, effects and more. 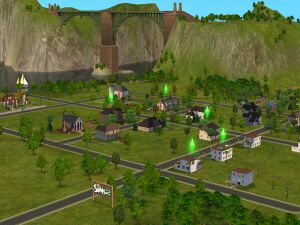 Pleasantview, one of the 3 main neighborhoods shipped with The Sims 2 base game

The Sims 3 does not feature neighborhoods in the same sense as other games. Instead, The Sims 3 introduced the concept of an open world. Sections of the worlds may be informally divided into neighborhoods, but this is strictly at the player's prerogative.

In The Sims 4, neighborhoods are considered to be smaller sections of the world they are in. A neighborhood consists of a number of confined lots, as well as an area that provides a few gameplay objects. Sims can visit a neighborhood by travelling to one of its lots. Neighborhoods themselves do not retain the open world concept of The Sims 3; Sims are able to move freely within the public spaces of that neighborhood, but visiting any lot will incur a loading screen.[1] Moreover, only one neighborhood can be loaded at a time; Sims outside of the loaded lots cannot be directly controlled. To a certain extent, tasks can be given to members of the active household that are not on a currently loaded lot; the tasks they can perform vary based on the Sim's location, and can range from building a skill or relationship, fulfilling needs, or changing one's behavior in work or school. The player can switch over to the lots that these Sims are on in order to control their actions more directly, or they can bring them to the current lot.

Neighborhoods provide a purely cosmetic atmosphere with their physical appearance and backdrops; however, these cannot be customized or changed in-game.

In The Sims Stories series, only one Sim is playable in the neighborhood until that Sim's storyline is completed. After that, every family in said neighborhood becomes playable.

Retrieved from "https://www.thesimswiki.com/w/index.php?title=Neighborhood&oldid=966119"
Categories:
Cookies help us deliver our services. By using our services, you agree to our use of cookies.