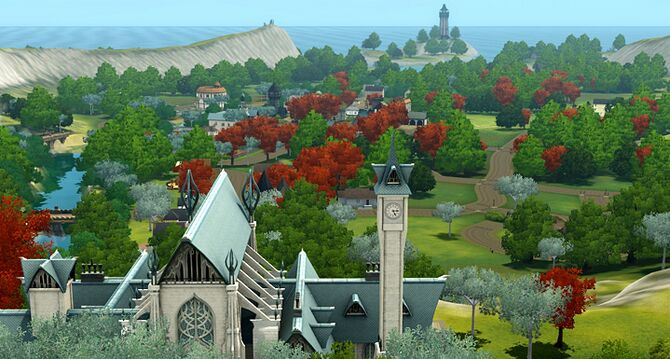 Dragon Valley is a The Sims 3 Store world that was released on May 30, 2013.[1] It was first announced at the Live Broadcast on April 16, 2013. The theme of this world is medieval and fantasy. It features brand new locations, features, as well as new characters.

Welcome to Dragon Valley, a land of myth and fantasy. It's been years since any adult dragons have terrorized this peaceful town but it's not yet time to rest. The elven Sims of Dragon Valley are working to ensure that their military is up to par, their citizens are prepared for disaster, and that the scientific techniques they've used to keep the dragonlings small stay intact. The skies may be clear for now, but beneath the surface a conflict is brewing between the Mithrillen and O'Connell families for control of the town. It's tradition vs. progress: on which side will you stand?

You all walk around with dragons on your arms as pets. But don't you see? We're just recovering; we've finally rebuilt after the original Dragons ravaged our land.

The O'Connells "land" in our world with their way of taming dragons and we've been following them ever since! When it was we Mithrilens that used to keep the town safe!"

Don't let them pull the wool over your eyes. Just look at the dragons. They are supposed to be "babies" but each one does something more dastardly than the last!

This will only end in misery. Let me help you. The Mithrilen family knows our ways, our traditions, and our bond with the land. Let me guide you to safety, before it's too late.

Mithrilen for Mayor
Before it's too late.

82 lots in total are in Dragon Valley: 27 commercial, 22 empty and 33 residential lots.

There are 23 families in Dragon Valley.

§800
Difficulty: 2
Riley Cromos, Zoe Cromos
Riley Cromos has been living the hard life raising his daughter alone. He loves her more than anything, but as a struggling baker it's getting harder and harder to make ends meet and find ways to relate to a soon-to-be teenage girl. Can they handle the growing pains or will this weakened family be over-powered?

§1,200
Difficulty: 2
Emma Delaney, Dorren Delaney
Emma loves her father and their eco-concious lifestyle, but she yearns for a bit more freedom. What's the harm in eating out on disposable paper products every once in awhile or driving a modern automobile? She wants to teach her father that you can save the earth, and live in it too.

§4,000
Difficulty: 2
Wynn Byrne, Finn Dolan, Sarah Dolan
Finn never imagined that he'd marry the girl that he rescued from a vicious wolf attack all of those years ago, but here he is living with an elderly grandmother and a beautiful wife with the affinity for red hoods. Now that they're expecting their first child he wonders if it's time to increase his vigilant watch for danger or begin to let down his guard?

§2,300
Difficulty: 3
Maeve Eames, Martin Eames, Liam Eames
Maeve lived her life on a ship. Her father was the captain of a ship and her youth was spent pillaging towns with her best friend, Martin. Now married and in their adulthood, Maeve and Martin are having a hard time getting used to the parent life with their young son Liam. With another little one on the way, the question is will they settle or will they sail?

§5,000
Difficulty: 1
Aaron Finnigan
Aaron never believed this gold at the end of a rainbow business, but he can't help but notice that good things have a habit of coming his way. Successful in business and a serious relationship with the beautiful Siobahn Murphy? Maybe he is lucky...

§2,000
Difficulty: 1
Quinn Flanagan
Playing the fool is simple when you have an ulterior motive. Quinn uses his charm and humor to get close to Sims for their secrets! He's the town's gossip columnist and gossip comes easy when you make people laugh.

§900
Difficulty: 1
Hugh Grey
Hugh Grey lives in quiet isolation and he likes it that way. Out at his lighthouse he can spend his days writing novels, maintaining his garden, and keeping the waters safe. He likes the peace of his lonely life, but will a new romance with Nessie Lochlan spark some color in all of the grey?

§700
Difficulty: 2
Marian Hooley, Robin Hooley
Robin loves the common man and will do anything he can to help, illegal or not. He and his wife Marian have little money and few possessions because he keeps giving them away! He has good intentions, but Marian hopes to teach him that stealing isn't the way to go.

§1,500
Difficulty: 2
Ava Kelly, Sean Kelly
Ava Kelly is young, fierce, and wanting to make a name for herself in town. That name is Kelly; Ava Kelly. Sean loves his driven wife and he'll do anything to help her get ahead. Even if that means making a name for himself just to stay at her side.

§1,000
Difficulty: 1
Nessie Lochlan
The Loch Ness Monster is real! Or is it? Nessie is an aspiring journalist and her star is rising! All she needs to do is keep taking pictures of this mysterious "monster" in the water and her job will promote itself! With her career underway she's hoping to get her romantic life in order with the mysterious lighthouse keeper, Mr. Grey.

§1,500
Difficulty: 2
Shannon MacAnna, Teagan MacAnna
Teagan is the exact opposite of her sweet, innocent sister, Shannon. Dark and devious to the bone, she does whatever she wants with reckless abandon and no consideration for others. Who cares if there is no "I" in Team? There is an "I" in Mine and that's all that matters.

§5,000
Difficulty: 1
Bradan MacGrath
Bradan is the ultimate champion and the one that everyone pays to see. He can vanquish any foe and conquer any competitor with ease. He's number one and always will be. It's probably best not to get in his way.

§4,000
Difficulty: 1
Lorna McCann
Lorna is the source of all that is good in Dragon Valley. No one knows her true age and it's almost as if she's lived forever. She's loving, kind, and always knows how to cure what ails you. Her healing isn't just homeopathic or scientific, it's practically magic.

§8,000
Difficulty: 3
Fintan Mithrilen, Aine Mithrilen, Riordan Mithrilen
Fintan still holds bitterness in his heart over the Mithrilen family being unseated as leaders in town. He still can't believe how quickly everyone took to the foreign O'Connell family and he believes that they should have stayed on guard rather than letting little dragons into their lives. He will protect his town no matter what, but will his anger and obsession hurt his family in the long run?

§1,000
Difficulty: 1
Siobahn Murphy
Siobahn is beautiful, talented, and a virtuoso when plucking strings. Her songs bring joy and laughter to everyone who listens, almost as if they're in a trance. She spends most of her time perfecting her music because you never know when you'll need a good entrancing song...

§10,000
Difficulty: 4
Morida O'Connell, Seamus O'Connell, Shauna O'Connell, Brien O'Connell, Aiden O'Connell
The O'Connell family has been leading the town since their great-great-grandfather Captain O'Connell landed here and helped the town tame the dragons. They love caring for the town, but they are starting to wonder if democracy isn't more the way.

§700
Difficulty: 1
Daric Ordhen
Daric loves his garden. There's nothing more he loves than his garden. He would spend all of his time in his garden if he could, but eating, sleeping, and other human "necessities" get in the way. If only he could be a statue, then he could stay in his garden forever.

§2,500
Difficulty: 3
Fiona O'Reilly, Morrigan O'Reilly, Conor O'Reilly, Chloe O'Reilly
Women! Women! Women! They're all that Conor sees. He opens his eyes to his youngest daughter vying for his attention and closes his eyes to his harried wife hoping for some rest, with a sprinkle of his teenage daughter rolling her eyes at him in between. What a life! He's overwhelmed, but he wouldn't change a minute of it.

§2,000
Difficulty: 2
Breandan O'Shea, Kearney O'Shea
Kearney and Breandan are always jousting to be the best. When Breandan got muscles, Kearney got bigger muscles. When Kearney got a girlfriend, Breandan got a prettier girlfriend! When Breandan joined law enforcement, Kearney join the Military! Kearney thinks he's the best brother, but then again so does Brendan! When will they learn that they're really quite the same?

§1,200
Difficulty: 6
Sophie Dwyer, Nora Lawless, Orion Lawless, Cassidy Predergast, Dillon Lawless, Corren Dwyer, Cara Gallgher
Cassidy was never able to have children of her own, but it didn't matter. There were always children in town without a parent. Parents lost to Dragon fires, house fires, fire fires.. .Times are tough and orphans need love too.

§1,200
Difficulty: 2
Susie Sackholme, Mason Sackholme
Lots of things always seem to happen around Susie & Mason. Though well-intentioned, they usually fall prey to some scheme or attack and danger seems to follow them wherever they go. That doesn't keep the men and women in town from being hopelessly attracted to them, however. Some think it's because there may have been fairy in their blood line.

§2,000
Difficulty: 1
Aislin Walsh
Aislin Walsh makes some of the best food in town, but isn't the most stable person around. Everyone knows how productive the farms are in their secluded town, so where did Aislin get all of this meat?

§5,000
Difficulty: 2
John Burb, Jennifer Pleasant
Jennifer and John tried to sail around the world as one last "hurrah" before their wedding day and somehow ended up here! The adventure for this couple is just beginning, but will they be able to find a way back home before their big day?

Retrieved from "https://www.thesimswiki.com/w/index.php?title=Dragon_Valley&oldid=955164"
Categories:
Hidden category:
Cookies help us deliver our services. By using our services, you agree to our use of cookies.