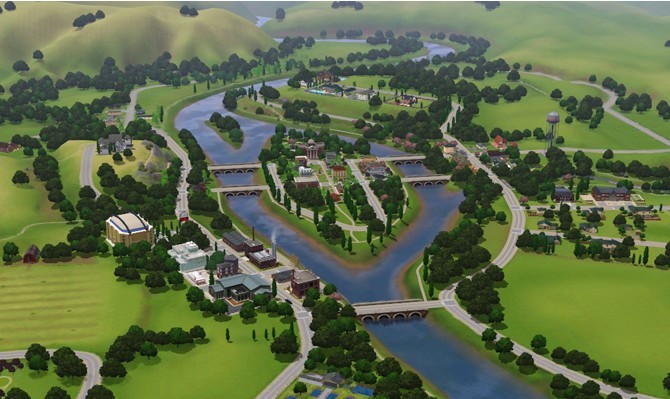 Riverview is a free downloadable town offered from The Sims 3 store. The town was developed by Visceral Games, and is a gift for people who register their copy of The Sims 3. It was the first town made available for download, and is currently the only free downloadable town. It initially served as an incentive for players to purchase, rather than pirate, their copy of The Sims 3, as pirated versions are unable to download Riverview from TheSims3.com. However, this upside no longer applies, due to more recent pirated versions of The Sims 3 come included with The Sims 3 store content such as Riverview.

Like Sunset Valley, Riverview is very large compared to previous games, although it is a small town with an idyllic countryside setting. It's dotted with farms, beautiful pastures, and nestled by a winding river, known, according the world's flavor text, as the Simomon. There are 95 lots altogether, three fewer than in Sunset Valley. The center of town is built up on an island in the middle of the Simomon. The street name where Constance Shelley and Meadow Carpenter-Rhodes live suggests that the island name is Long Island. On one of the shores of the river, there is an industrial area featuring several rabbit holes. The landscape is primarily flat, with one notable hill upon which stands Remington's Ruse, the Remington family home.

The architectural style is primarily small rustic town, with a few industrial-style lots in the industrial area that contains the military base, hospital, and abandoned warehouse. Despite the small town style, there is a lot of diversity in the townscape, with farms, poor and wealthy subdivisions, and forested terrain.

There are 50 new playable Sims in total. There are 22 empty residential lots for players to get started on, or they can choose any of the pre-made families. The cheapest of the lots is §1200, and the most expensive is §14,700. The smallest available lot is 20x30, and the largest is 64x64. The most expensive lot will put players in the company of Lessen, Shallows, Wilson, and Grisbys.

There are a few old faces from The Sims 2 in Riverview, just as in Sunset Valley. 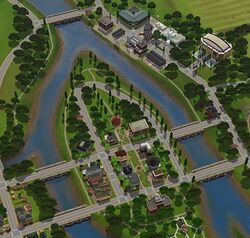 §9,000
Difficulty: 2
Ma Bagley, Sherman Bagley, Rhoda Bagley
The Bagley family business is just a wee bit on the wild side. Rhoda is following in her mother's footsteps, but Sherman seems to want a different path to travel.

§1,600
Difficulty: 1
Hal Breckenridge
Hal is quite the man about town. He's a love 'em and leave 'em kind of guy. Is there anyone in Riverview who can capture his heart?

§1,200
Difficulty: 1
Lorraine Cantina
Lorraine has always been committed to public service. Will she be able to meet and greet enough for the Riverview community to be elected mayor?

§2,400
Difficulty: 2
Hope Carpenter, Buzz Rhodes
Hope and Buzz have lived happily together for what seems like forever. They've worked hard to make an honest living and instill good morals in their daughter, if only she would come and visit every once in awhile.

§1,200
Difficulty: 1
Meadow Carpenter-Rhodes
Following in her mother's footsteps, Meadow has taken the caring of plants to a whole new level. Will she ever find room in her heart to let the seeds of love take root?

§1,300
Difficulty: 1
Billy Caspian
Billy was thrilled when he found the acclaimed artist, Hank Ferdinand, living in Riverview. Hank was more than willing to mentor Billy, before he recently disappeared. But did Billy actually learn anything?

§2,000
Difficulty: 1
Hunter Cottoneye
Some people just do not play well with others. Hunter Cottoneye is one of them. He's fine with that. He would just as soon start a fight with you as he would shake your hand.

§300
Difficulty: 2
Odin Crosby, Heather Crosby
It's never been clear why the Crosbys married because they are so different in so many ways. Will Riverview be a place in which they can find a way to be happy? Or will they go their separate ways?

§1,200
Difficulty: 1
George Dean
After his mother's tragic death, George Dean devoted his life to helping others. He lives in an abandoned firehouse to remind him of his dream of being the guy who can save the day.

§5,000
Difficulty: 2
Bennie Dean, Henry McGlum, Melvin Taft
When Bennie Dean's wife died he couldn't adjust to living alone, so he asked his good friends Henry and Melvin to move in and share expenses. But are they too old and set in their ways to get along?

§2,000
Difficulty: 3
Walter Grisby, Yvette Grisby, Laurel Grisby
Walter and Yvette know that beauty is in the eye of the beholder. They love each other for who they truly are. Will their daughter find someone who can see her inner beauty as well?

§700
Difficulty: 5
Rayna Kaminski, Yuri Ivanov, Nadine Ivanov, Tatiana Ivanov, Dimitri Ivanov
Grandma Kaminski and her family have been wandering around for years. When her daughter married Yuri Ivanov and had two children, she suggested they try to find a place to settle down. Will Riverview keep their interest for long?

§2,000
Difficulty: 2
Aiden Jones, Hannah Jones
When the Jones family inherited the Remington Estate from Hannah's cousins, they imagined enjoying the beautiful vista and the quaint little town. They didn't imagine that they would be seeing specters! Can they find a way to restore the restless ghosts?

§2,000
Difficulty: 2
Norman Joy, Elaine Joy
Norman Joy and his wife wanted their daughter to grow up on home grown food and family values. When his wife died, Norman did his best to provide for Elaine. Will she follow her parents dreams or break away and make a life of her own?

§10,000
Difficulty: 1
Jon Lessen
Jon Lessen worried that his guitar playing just wouldn't be as good after his mentor, Destry Dixon, died. To make amends for the time he didn't give the old man during life, he moved Destry's remains into his guest house. Will he be able to keep Destry's music alive?

§3,000
Difficulty: 2
Roxie Lin, Shirley Lin
Roxie Lin is a wild child and her sister, Shirley, is just the opposite. The only thing they have in common is stubbornness. When they moved into their parents' old house, they couldn't decide on the decor so they divided it up and defied traditional interior design.

§4,000
Difficulty: 3
Angel Lobos, Marisol Lobos, Carlotta Lobos, Anita Lobos
The Lobos family needed a fresh start. Will Riverview be the place they can create the solid family life that they want for their twins?

§1,500
Difficulty: 3
Ginny McDermott, Luke McDermott, Maximus McDermott, Travis McDermott
The McDermotts have a way with plants. They've been growing their own food for generations, but they do try to keep up with the times. Their two young sons spend hours at the river catching fish. Will they carry on the family traditions?

§200
Difficulty: 1
Lucky Perkins
Life has never been easy for Lucky, but he has always found a way to get by (sometimes he found it in other people's homes). Will he lose his luck now that he's found a little place to call his own?

§10,000
Difficulty: 4
Kurt Shallow, Tom Shallow, June Shallow, Dallas Shallow, MaryKay Shallow
It isn't love that keeps the Shallow family living under one roof. They don't even like each other. So what is it that holds this family together?

§2,500
Difficulty: 1
Constance Shelley
Constance Shelley loves books. She's really not interested in a social life or romance, and she hopes Riverview is a place where she can find some tranquility.

§5,000
Difficulty: 2
Nellie Spenster, Lucille Spenster
The Spenster sisters do not suffer the company of fools. They were raised to take care of themselves and they've done very well, thank you. But there are some interesting new neighbors in town. Will they welcome them with open arms?

§9,000
Difficulty: 1
Jebidiah Wilson
County Care General Hospital recruited Jebidiah Wilson and he was happy to join the community. If only he would take some time away from work to meet the people in town he might find a friend or two.

Although not in any previous games, Riverview does feature several families that are implied to have moved to Pleasantview by the time of The Sims or The Sims 2.

§600
Difficulty: 5
Flat Broke, Flo Broke, Ruby Broke, Skip Broke, Buck Broke, Trigger Broke, Susie Broke
When Flo and Flat met in high school, sparks flew. Life has never been easy but as long as they are together they find a way to have fun. When Flat's brother Buck showed up with two kids and no wife, they just invited him to move in. The more the merrier.

§2,000
Difficulty: 1
Don Lothario
Don woke up one morning in a whole new world. He remembers stepping on to a teleporter, several women laughing, then nothing until he found himself here...

§2,000
Difficulty: 3
Robert Newbie, Mags Newbie, Bob Newbie
They may be new in town, but they feel like they've found the place they were destined to live. Will their son stay and make his life in Riverview? Or will he find somewhere more... pleasant?

§3,000
Difficulty: 3
Vadim Simovitch, Fatima Simovitch, Betty Simovitch
In an attempt to recapture her own lost youth, Fatima has been grooming her daughter Betty to pursue a career in music. Vadim loves them both but tries not to interfere. He prefers to just tune out to the TV.

These Sims are pre-made, but homeless when Riverview is first loaded.

Retrieved from "https://www.thesimswiki.com/w/index.php?title=Riverview&oldid=962664"
Categories:
Hidden category:
Cookies help us deliver our services. By using our services, you agree to our use of cookies.