From The Sims Wiki, a collaborative database for The Sims series
(Redirected from Electrocution)
Jump to navigation Jump to search 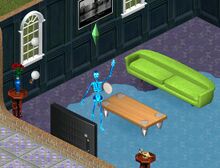 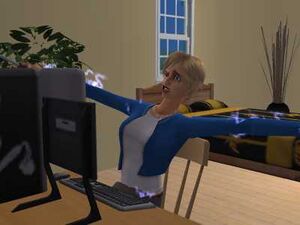 In The Sims 2 for console, Sims with low mechanical skill can also get shocked while operating a DJ booth. This will happen when the machine effects are deployed (laser, fog, and fireworks). This shock will result in electrocution, and will immediately kill the Sim.

In The Sims 3, Sims get the singed moodlet after getting shocked for the first time. The lightning will cause the Sim to have burned clothing and messed up hair. If the Sim gets shocked again with the singed moodlet, the Sim will be electrocuted, unless they are repairing a computer. If the Sim has the unlucky trait, they will immediately be electrocuted regardless of being singed or not. Electrocuted ghosts look yellow and have electric currents running through their body. Sims usually are shocked if they try to repair an object with a low handiness skill, or if an upgrade fails on an object. Sims have a higher chance of getting shocked if they are also standing in a puddle of water while attempting to repair an electrical object. In Supernatural, Sims may be shocked if they eat a jelly bean. A Fairy can also get shocked if they’re drawn to the Spectrum Mood Lamp for too long. In University Life, Sim may be shocked when they are doing brain enhancement. When a Sim gets shocked, there is a small chance that both the object and the Sim will catch on fire.

Seriously Fried moodlet
In The Sims 4, Sims may be shocked when attempting to repair objects. If their needs drop too low during a shock, they will be electrocuted. A Sim has a higher chance of being shocked when they're repairing electronic objects with a low mechanical skill, or when they're repairing an electrical object whilst standing on top of a puddle of water. A Sim will get the "Seriously Fried" moodlet when they get shocked, which will give the +40 dazed emotion for 3 hours, and causes smoke to pour out of the Sim. There is also a chance of the object the Sim was repairing catching fire. If the Sim get shocked again with the moodlet, they'll be immediately electrocuted. In Get to Work, a Sim in the Scientist career will automatically be shocked if they use the interaction "Press Big Red Button" on a chemistry lab. The shock is non-lethal but gives the "Seriously Fried" moodlet and will not kill the Sim no matter how many times the interaction is used even if they already had the "Seriously Fried" moodlet before. In Discover University, a Sim working on the Robotics Workstation has a chance of being shocked, giving the "Seriously Fried" moodlet. Should they continue working on the workstation and get shocked again with the moodlet, they will be electrocuted.

Retrieved from "https://www.thesimswiki.com/w/index.php?title=Shock&oldid=963205"
Categories:
Cookies help us deliver our services. By using our services, you agree to our use of cookies.