From The Sims Wiki, a collaborative database for The Sims series
(Redirected from Memory)
Jump to navigation Jump to search

Memories are collected by Sims in The Sims 2, The Sims 3 and The Sims 4.

Memories are usually used as a subject of a conversation, in addition to interests. Recent memories are likely to be the conversation topic, and will eventually weaken to the point of not being a topic any more. Negative memories can be spread by gossip. Sims who have heard a piece of gossip can pass it on to other Sims as well. This is because Sims accumulate gossip memories which do not appear in the memories panel, but which can be viewed with SimPE. Gossip can be started by Sims who witnessed a bad experience, or spread by those who heard the story from other Sims via gossip or chat. Since invisible gossip memories can accumulate to the point of causing problems, the FFS Lot Debugger from MATY has options to remove them.

In Bon Voyage, a new memory feature is added. A suitcase icon appears in Sim's memories panel. Clicking it will show the Sim's vacation mementos that were collected while going on vacation. Vacationing Sims will receive a title based on the number of mementos they have collected. This is only a trivial feature, and collecting all of the vacation mementos will not give any sort of reward to a Sim. Each Sim has his or her own vacation mementos.

Memories cannot normally be removed in-game without the use of mods or hacked objects. Memories can be removed using SimPE, although removing certain memories can corrupt the neighborhood. In SimPE, any memories that are colored black or blue are safe to remove.[1] If Apartment Life is installed, a witch or warlock can cast the Tabula Rasa spell on another Sim, which will erase their memories. 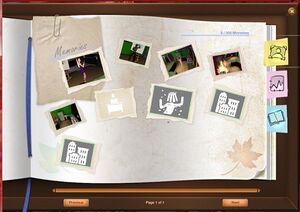 Scrapbook Memory System in The Sims 3

Memories were introduced to The Sims 3 base game in Patch 22, coinciding with the release of The Sims 3: Generations. Before then, moodlets acted as temporary memories. Larger event moodlets last longer, such as a death or divorce. Sad moodlets will make Sims cry every once in a while until the moodlet goes away.

Events in a Sim's life are automatically captured and stored in the new Scrapbook, where they can be edited and shared.[2] Instead of using icons to represent memories, the in-game camera takes a snapshot of the memory and, when enabled, will notify what memory occurred.

Memories can also be captured manually. Any user-made memories require a picture taken by the player, and will also require a title. If the camera is not on the same lot as the Sim in the active household who is receiving the memory, the memory will have a placeholder for the picture and a gray background. If the Sim receiving the memory is not in the active household, the memory will have a watermarked background depicting whether the memory is positive, neutral, or negative. Editing a memory provides a share function which can either upload the memory to the Sims 3 website or to Facebook as a status update. Players who upload memories may get items from the store (according to the number of memories uploaded).[clarification needed]

The memory system in The Sims 3 has been reported to bloat save game file sizes, and has been linked to a number of save game errors. Deleting memories in-game does not help, as the resources are not actually removed from the game. Players can avoid this issue by disabling the memory system entirely, although it will not removing existing snapshots; these can be removed using S3PE.[3][4] There are, however, reports that the feature in-game to disable memories does not work all the time.[5]

In The Sims 4, the memory system is a mixture of the one in The Sims 3 and the photo album in The Sims and The Sims 2. Players can use all of the screenshots they have taken to make memories. Each memory can also have its own emotion. The emotion of the memory depends on what emotion the selected Sim was feeling when the screenshot was taken, so it is possible to have memories of a Sim doing romantic socials that are still playful memories, or a Sim interacting with their enemy that are still happy memories. Having a Sim reminisce on a memory will give them a moodlet, which gives the Sim an emotion the memory is locked in to.

Retrieved from "https://www.thesimswiki.com/w/index.php?title=Memories&oldid=253278"
Categories:
Hidden categories:
Cookies help us deliver our services. By using our services, you agree to our use of cookies.