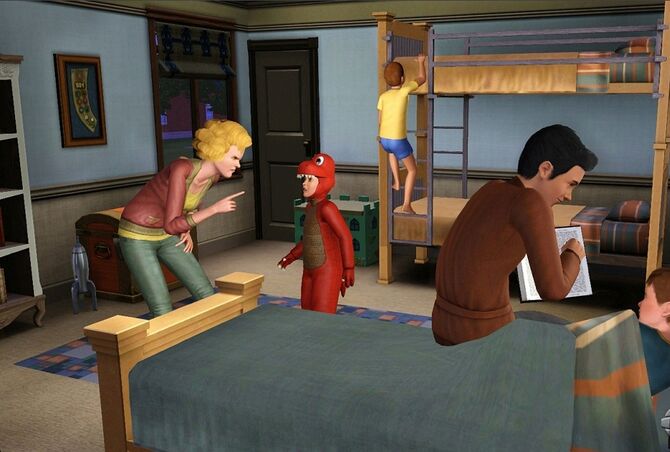 The Sims 3: Generations
Expansion pack for

Each life phase has a theme. For children, imagination and make-believe are key themes. For teens, rebellious, chaotic scenes such as parties and pranks are an addition. As a young adult and adult, the focus is on their relationships with others, from getting married to having children of their own. Elders get to enjoy their time reminiscing about the golden years and the joys of watching their grandchildren grow up. There are also now 5 schools (including Military school, Prep School and Art School) for Children and Teenagers to go to.

Enjoy a whole spectrum of rich life experiences with your Sims! Start off in the imagination-fuelled world of childhood and embrace the drama of the teen years. Experience the complicated realities of adult life, then reap the benefits of growing up in each life stage. A wealth of new options and activities makes your Sims' lives more meaningful than ever before, whatever their ages. With new celebrations, dramatic life events, and all-new ways for your Sims to express their creativity, The Sims 3 Generations lets your Sims live life to the fullest!

A trailer, which later turned out to be legitimate, was leaked on March 11, 2011 from The Sims 3's official twitter and Facebook. The trailer was leaked along with a trailer for a then-unconfirmed expansion pack, "Unleashed" (later confirmed as The Sims 3: Pets). Features shown in the trailer include tree houses, on-the-ground water slides, spiral staircases, mid-life crisis, family videos and pranks. On April 5, 2011, EA confirmed the rumors with a press release, followed by an official release of the trailer.

This is a list of artists and their songs that were featured in Generations:

Retrieved from "https://www.thesimswiki.com/w/index.php?title=The_Sims_3:_Generations&oldid=964599"
Categories:
Hidden categories:
Cookies help us deliver our services. By using our services, you agree to our use of cookies.