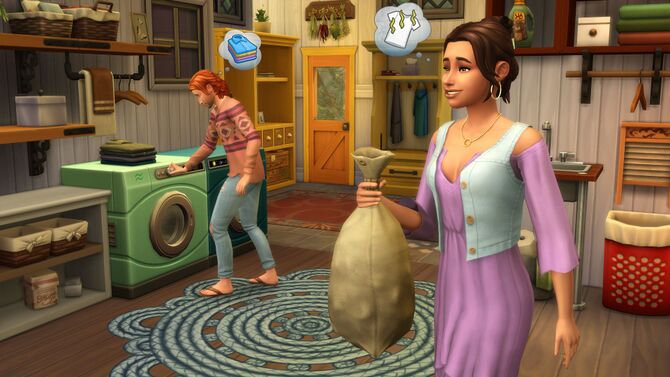 The Sims 4: Laundry Day Stuff[1] is the thirteenth stuff pack for The Sims 4.[2] The pack marks the return of the laundry system, first introduced in The Sims 3: Ambitions, as well as new country-themed outfits and décor.

The stuff pack's development such as theme, content, icon and title was guided by a number of public community votes.[3] The pack was released on January 16, 2018 for PC and OS X, and on August 14, 2018 for console.

Surround your Sims in clean clothes while living a rustic lifestyle!

Surround your Sims in clean clothes while living a rustic lifestyle with The Sims™ 4 Laundry Day Stuff. Your Sims’ can now clean their clothes, from gathering laundry to washing and drying, giving their outfits a spotless look. Embrace the rustic life with new country-themed décor and clothing for your household.

Wash Your Wardrobe. Gather your Sims’ laundry, load the washing machine, and then toss them in the dryer for a pristine look. Your Sims can also hand wash their clothes in a washtub, then line dry for a spotless outfit that other Sims will surely notice!

On April 3, 2017, SimGuru Graham (Graham Nardone) posted a kick-off blog for the development of a new community-guided stuff pack.[3] The first blog post included a poll to select the general theme of the new stuff pack, and gave five options: "Eco Living Stuff", "Starter Home Stuff", "Arcade Stuff", "Dangerous Stuff", and "Wedding Stuff". After the poll closed on April 6, "Eco Living Stuff" was selected as the theme for the new stuff pack. The pack theme has a brief description:

On April 10, 2017 through April 12, 2017, a vote was held to determine the art style for the new stuff pack.[5] Two style options, labeled "Style A" and "Style B," were voted on; "Style B" was ultimately chosen by the voters as the pack's general art style.

Based on the selected art style for the pack, concept art for 68 separate objects, as well as several CAS assets, were designed. A third community vote, from May 18 through May 21, 2017, narrowed the included objects down from 68 to 29.[6]

The fourth community vote to decide gameplay features, held from June 23 to June 26, resulted in laundry being selected as the main feature of the pack.[7]

The fifth community vote to decide the name of the stuff pack, held from September 6 to September 8, resulted in the name "Laundry Day Stuff" being chosen out of four possible options: Rustic Lifestyle Stuff, Rustic Home Stuff, Laundry Day Stuff, and Laundry Stuff.

The sixth community vote to decide the icon for the stuff pack, held from September 13 to September 15, presented four options: a clothespin, a pair of socks, a washing machine, and a hamper. The winning icon was a hamper.

During a live stream they confirmed that they may add a version of the door without a curtain and separate the sink and bucket to be two different objects.

On September 26, SimGuruGraham released a gif on Twitter showing a preview of the new clothesline object; the clothes gently moved in the breeze.

This stuff pack includes a total of 49 new objects, the vast majority being country-themed.

Sims receive a range of new clothing along with new hairstyles, outfits and accessories.

This stuff pack includes new styled looks for Sims of both genders.

Retrieved from "https://www.thesimswiki.com/w/index.php?title=The_Sims_4:_Laundry_Day_Stuff&oldid=963640"
Categories:
Hidden categories:
Cookies help us deliver our services. By using our services, you agree to our use of cookies.