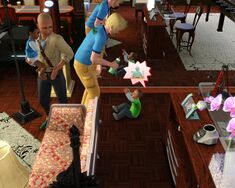 A Sim taking care of a toddler

Daycare is a self-employed profession added in The Sims 3: Generations. Any Sim can turn their home into a daycare center. Daycare specialists are responsible for watching and taking care of both toddlers and children. As their job level increases, daycare specialists will be asked to take care of more children, and unlock a new daycare uniform. Daycare is the only self-employed profession to have only five levels.

To join this profession, have a Sim use a phone or computer, click on the Jobs & Professions tab, and select the day care option. Toddlers will be dropped off at the Sim's house in the morning and children arrive on their own after their school day (which may or may not include afterschool activities they are enrolled in). Make sure there are plenty of toys and books for the kids and the proper care items for them. At the end of the day, a report is given based on each child's mood; the best being "great." If the child had an "okay", "good", or "great" report, the parent will give the daycare provider a handsome tip.

Responsibilities eventually include working on the weekends as well as taking care of a "problem child." Problem children will break appliances and electronics if left alone. Their homework takes longer for them to complete as well. Occasionally, a problem child will not do their homework, even if they are asked to. The player must initiate the "help with homework" interaction to get them to do it. The daycare provider will have an option to "talk about problems" with them, which keeps them out of trouble and keeps items intact. Eventually, problem children will be "cured" and will no longer break appliances or require special attention. Curing a problem child will earn the daycare provider a 1,000 simoleon tip.

Sims who reach level 3 in this profession will have the "Tell Tale" self-interaction. This option is used to have the Sim tell a tale for the children, which increases their social and fun needs. When this is initiated, the toddlers and children will gather around and listen to the tale being told.

If children are repeatedly in horrible moods when their parents pick them up, a daycare provider can lose their daycare license. Operations will be suspended until the Sim gets their license back; this entails taking a class at City Hall, which costs §1000.

Cool Care-Giver (level two) - This level is basically the same as level one except the player's Sim now has to look after a third toddler.

Day Care Dynamo (Level three) - The player's Sim in charge is now expected to teach the toddlers how to walk and talk. The player's Sim earn a weekly stipend of 300 Simoleons a week. Parents also start calling saying they will be late and over the weekend. Normally the player's Sim will get a call around 9:30pm on Saturday with a parent asking to watch their child on the next day. When parents are late, or call on the weekend the player's Sim can expect an extra payment.

Good Guardian (Level four) - The player's Sim now watches five total children, which will be made up of a random number of toddlers, and elementary school students when they get out of school. This job gets a weekly stipend of 400 Simoleons a week, plus any extra the player's Sim gets from late nights or weekends. This daycare level gives your Sim the "go play" social interaction to be used on the children in their care. The child is expected to have their homework finished and it will show up in the daily report whether it was done or not. If the child starts playing immediately, the player's Sim has the option to tell them to "do homework". Because of time constraints, children's homework will already start off as 60% completed. The player's Sim also has to check the kids' needs by hovering over them. Sometimes player's Sim may need to prepare a portion of food in case the kids feel hungry, and immediately ask them to have a meal.

Daycare Specialist (Level five)- As a reward for reaching the highest level of the Daycare profession, Daycare Specialists will receive their own Daycare van. At this level, the player's Sim will be expected to watch a total of six toddlers and children, as well as the occasional "problem child". Player's Sim has also unlocked the "Admonish Child" and "Joys of Children" social interactions.

Player's Sim will also have a chance of being sent some free stuff from parents as a guardian reward, which can be found as mail in the mailbox. 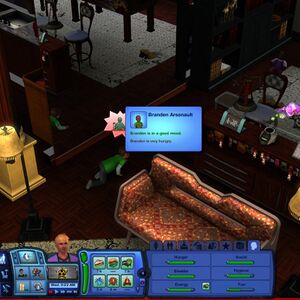 Reveal their needs and fulfill them ASAP!

As said above, the children's needs can be revealed by hovering over the particular child. Fulfilling the needs on time will result on better mood for the children. A child can have multiple needs, which will all affect his or her mood, but needs are only revealed one at a time in order of urgency. The needs urgency level will be identified by some colors, explained below :

The colors above also happen as identifiers for children's moods, explained below:

Kids have similar needs to toddlers, except they are easier to fulfill. They are explained below:

This need often appears particularly during the weekend, when kids arrive at 9am instead of after-school time. Unlike toddlers, children will need to eat a group meal. There are only two alternatives known so far:

There are only two alternatives known so far:

Retrieved from "https://www.thesimswiki.com/w/index.php?title=Daycare&oldid=614335"
Categories:
Hidden categories:
Cookies help us deliver our services. By using our services, you agree to our use of cookies.