Politics follows a very similar pay curve to the military and law enforcement career tracks, having the third-highest pay at rank 1 but the third-lowest pay at rank 10 of any of the career tracks in the base game. However, it is by far the most difficult career track to reach the top of due to its extremely steep friend requirement (17!), and at high ranks, it has by far the worst ratio of pay to friends required. Out of all 20 careers from the base game, Livin' Large, and Unleashed, it is tied with Paranormal for being the most difficult career track to climb and only Slacker has a worse ratio of pay to friends required at rank 10. It's good for making quick cash in the first few in-game days of a Sim's life, but players will probably want to switch to something else as soon as possible.

The Mayor will eventually change careers and become an Intern in the Medicine career track.

In The Sims 2, the career reward object is the Enterprise Office Concepts Bushmaster Tele-Prompter. It enhances a Sim's ability to improve the Charisma skill. If The Sims 2: Apartment Life is installed, Socialites are likely to work in this career. The college majors associated with this career are Political Science, Economics, History and Drama, making it (Along with Show Business) the only career track with 4 college majors associated.

Politics is a career track available in The Sims 2 (console).

Government is one of the career tracks available in The Sims 2: Pets (console).[1] 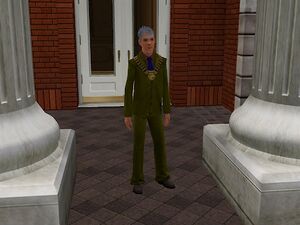 Political is one of the basic career tracks in The Sims 3. Sims can be employed from newspaper, computer, or city hall. Working in the Political career requires the Charisma skill, which indirectly requires friends in order to advance the skills as well. Additionally, Sims are required to collect government funding as one of the performance factors. Sims can collect the funds by asking in person or by throwing a campaign fundraiser party.

The Political career has a special performance tone, "Propose New Course of Action." This special tone needs 16 cumulative hours to be finished. It has several possible outcomes when Sims finish proposing the course of action. There's a 10% chance that Sims will be promoted outright regardless of performance, 30% chance for +40 relationship with the boss, 40% chance for +40 relationship with the boss but -40 with coworkers, and 20% chance that the boss and coworkers will get damaged relationships by -30 and -40, respectively.

The Politician career is one of the three career tracks introduced in The Sims 4: City Living expansion pack.[2] Like the other City Living careers, Sims in the Politician career have the option of working from home. They are offered their first work from home assignment immediately after joining the career, which, if completed, improves their job performance. The purpose of this assignment is to choose a cause (out of a selection of No Sim Left Behind, Simoleons for Everyone, Speak for the Trees, World United, and the Foundation for Less Mischief), which they then promote as they continue their career. After this, if they choose to work from home, they are given two randomized assignments to complete each day, though they can still choose to go to work as they normally would.

After being promoted from level four, Sims will be able to choose one of the two career paths: Politician or Charity Organizer.

Description: "Join a life of public service! From protesting against the unjust, to gathering donations for good causes, or even collecting the occasional bribe as a "means to an end", Politics is always interesting."

Description: "Secure votes, give speeches, and become the National Leader! Better brush up on your public policy!"

Description: "Use your political prowess for the greater good. Raise money and fund a solution for the Cause you support!"

Retrieved from "https://www.thesimswiki.com/w/index.php?title=Politics&oldid=957672"
Categories:
Hidden category:
Cookies help us deliver our services. By using our services, you agree to our use of cookies.