From The Sims Wiki, a collaborative database for The Sims series
(Redirected from Science)
Jump to navigation Jump to search

A Mad Scientist in The Sims 3.

The science career is a base game career track for The Sims, The Sims 2, and The Sims 3. It returns in The Sims 4: Get to Work (where it is known as "scientist") as an active career.

Of the ten career tracks in the base game, science had the fourth-lowest pay at rank 1 and the fourth-highest at rank 10, behind entertainment, pro athlete, and business. It was also the second-easiest to climb (behind military), requiring only 10 friends to reach rank 10, and was in a three-way tie (with pro Aathlete and entertainment) for best ratio of pay to friends required to reach rank 10 ($1000/10 friends = 100). All of this made it one of the best career tracks to pursue. Out of all 20 career paths from the base game, Livin' Large, and Unleashed, it has the seventh-highest pay at rank 1 and the ninth-highest at rank 10, and is the seventh-easiest to climb, making it still an above-average choice.

A Mad Scientist will eventually change careers and become a Criminal Mastermind in the Life of Crime career track. This is the only case in which a Sim will be moved from the top of one career track to the top of another.

In The Sims 2, the career reward object is the SimSanto Inc. Biotech Station. If The Sims 2: Apartment Life is installed, Techs are likely to work in this career. College majors associated with this career are Physics and Mathematics.

Science is a career track available in The Sims 2 (console).

How to apply: Directly at work place, Newspaper, Computer

Assassin Bug Study
The Science Facility wants to run another study on the camouflage properties of exotic insects. They've asked you to collect a few Assassin bugs for the study.
Collect 4 Red Assassin Bugs

Fix It!
Your partner from the Science Facility recently broke the all-important what's-it being touted by the lab as the thingamajig of the next decade (or so). You're known as a whiz with the wrench, so your partner hopes you can salvage the gizmo before the boss finds out. Go to the Science Facility to fix the device, and you'll improve your relationship with your co-workers and earn a cash bonus.

One Shall Fall
Dr. Inquitous has devised another nefarious plot to destroy the town! Nobody should be able to use science for the wrong reasons... except you! Quickly go to the Outstanding Citizen Warehouse Corp. to match wits with him and stop his scientific scheming before it's too late. City Hall will reward you handsomely for your services!

Global Science Fair
The Global Science Fair has stopped in town - it's time for you to compete and show off your stuff! Such incredible revelations have emerged from this; such as the discovery of the world's flatness, patents for life-extending elixirs, and even theories about ghosts! Tune up your handiness, gardening, and fishing skills, and get to the school in the right mood and you just might win a cash prize and more!

Unknown
Your boss broke his shower and needs you to fix it!- Cash reward, Improved job status 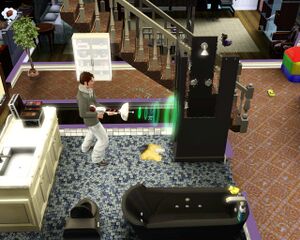 A Sim is performing experiment on a shower
After a Sim has attained the Mad Scientist (Science level 10) job, that Sim will be able to use the "Perform Experiment On..." action on many items around the house and on community lots. Note that this perk is kept after the Sim retires/quits. The Sim can also "Undo Science Experiment" on those objects (if the experiment didn't delete or damage the object).

Note: Some objects such as kitchen counter surfaces cannot be experimented upon in their default state, as they offer no default interaction and therefore cannot be clicked on. However, once the object becomes dirty and allows the "clean" option when clicked, you can use this opportunity to "Perform Experiment On..." them. This opportunity will disappear once you have cleaned them.

This action can have one of several outcomes:

The workplace for this career is FutureSim Labs, a science lab lot, where Sims can use scientific objects such as the Invention Constructor, Chemistry Lab and Chemical Analyzer. Only Sims currently in the scientist career can interact with the Invention Constructor and Chemistry Lab. In the labs, Sims can invent new things and test new serums, create a portal to Sixam, and more.

Description: "Calling all brains! Are you the nerdy type who aspires to one day wear tin foil on your head and decorate your studio with huge bubbly tanks? A Scientist who proves they've got the gray matter to change the world as we know it can unlock new outfits like the UFO hunter or objects like a swanky Chemistry Lab for concocting new inventions and serums."

Retrieved from "https://www.thesimswiki.com/w/index.php?title=Science_(career)&oldid=967209"
Categories:
Hidden category:
Cookies help us deliver our services. By using our services, you agree to our use of cookies.