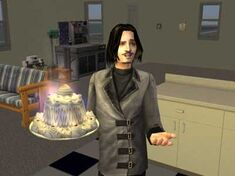 A baked alaska in The Sims 2.

Cooking is one of the many skills to be gained in The Sims series.

A higher cooking skill reduces the chances of a Sim accidentally causing a fire while cooking. In The Sims 2, The Sims 3 and The Sims 4, Sims will learn to make different meals as their cooking skill increases, and the chance that they will burn a meal will go down. Some careers require cooking skills, most notably the Culinary and Science career.

To increase a Sim's cooking skills, they may need to buy a bookcase and read a cooking book. In The Sims 2 and The Sims 3, preparing food, even cold food such as cereal or sandwiches, also increases the skill. Even so, it's still recommended to have a few skill points before attempting to cook on a stove, as one constant in the Sims games is that an unskilled cook using a stove is liable to start a fire.

In The Sims and The Sims 3, the Cooking skill determines how satisfying a meal is when a Sim has made it. The better the Sim's cooking skill, the faster the hunger bar will be filled. Cooking with fresh food improves the quality of the meal in The Sims 2, The Sims 3 and The Sims 4.

In The Sims, cooking is a very important skill, as using a stove or toaster oven with less than three points carries a risk of fire, and using one with no Cooking skill at all is a high fire risk. Sims with low cooking skill can use a microwave, which only has a small chance of starting a fire, but meals made in a toaster oven or microwave are not as satisfying as those cooked on a stove. Also, if a kitchen has multiple types of cooking appliances, the player cannot choose which one the Sim will use. The only way to be sure that a low-skilled Sim uses a toaster oven or microwave is to not give him or her anything else.

Higher cooking skill will reduce the amount of time a Sim needs to prepare and cook a meal unless a food processor is used.

Sims will always prepare the same meals regardless of their cooking skill level. When instructed to make or serve a meal, they will always produce a can of beans if there is no preparation surface or food processor; a plate of salad if there is no cooking appliance; and a plate of steak and beans if both a preparation surface and a cooking appliance are available.

In The Sims: Makin' Magic, cooking is vastly expanded to encompass baked goods and nectar. Sims can make bread, pie or cake in the Standard-Plus Brick Oven for Bakers and nectar can be made in the A Pressing Feeling nectar press by collecting and combining ingredients. The baking oven carries a slightly higher fire risk than a regular stove; Sims need at least five points to use it safely. Using incorrect ingredients will produce a burned mess or undrinkable liquid, regardless of the maker's cooking skill. All recipes and their required ingredients are listed in the Sim's Guide to Cooking cookbook. Baked food is immediately served just like regular meals, while bottles of nectar are added to the maker's inventory. Nectar can be sold or stored in the Taste of the Vine Nectar Bar, which will also allow Sims to consume the nectar.

Several new appliances included in Makin' Magic can increase a Sim's cooking skill, such as the Old-Fashioned Butter Churn and the Wax'n'Honey Maker. The cooking skill also determines how many charges a magical Sim will get when making a spell.

This is a full list of recipes, which can also be found when viewing the recipe book. Carrot cake requires The Sims: Unleashed, as carrots are only obtainable by growing them or purchasing them in Old Town. Magic nectar and magic tart are not initially listed in the recipe book, but the recipe will appear after being made for the first time. Magic nectar can only be consumed directly from the press and will temporarily turn the drinker into a ghost, much like the Shed Your Skin charm. The magic tart will be immediately consumed by the chef and will either boost their mood, or temporarily turn their head into that of a donkey.

Sims that keep reading and cooking to build this skill will be surprised by how much more satisfying their meals become. Cooking is especially important if your Sim entertains ideas of one day becoming a famous chef and hopes to avoid kitchen disasters.

In The Sims 2, cooking skill can be gained from the bookshelf, by preparing a meal, by using the Culinary career reward object, which is the chocolate maker, or by watching the cooking channel (Yummy Channel) on television.

While cooking skill does not actually determine the amount of satisfaction gained from eating food, a higher cooking skill means the Sim can cook dishes that have a higher satisfaction, and decreases the chance of burning the food, or even starting a fire. In addition, high-level Sims will occasionally giggle and mock the program when watching the yummy channel.

The Sims 2: Open for Business allows Sims to make any meal, except for a TV dinner, they have the skill to prepare at any time of day. A meal made in this fashion will not be automatically served.

If The Sims 2: FreeTime is installed, studying the cooking skill from a book or by watching the yummy channel will increase a Sim's enthusiasm for the cuisine hobby.

Cooking as a skill returns in The Sims 3. The skill is augmented by the natural cook trait. The level of cooking skill determines what quality dishes can be made, what kinds of foods can be made, and the likelihood of whether the cooker will start a fire (if using appliances that aren't fireproof). However, Sims are not able to make certain foods until they learn the recipes for them. Several opportunities exist for skilled cooks. Sims can purchase cooking books and from there learn how to cook certain foods.

Retrieved from "https://www.thesimswiki.com/w/index.php?title=Cooking&oldid=962964"
Categories:
Hidden category:
Cookies help us deliver our services. By using our services, you agree to our use of cookies.