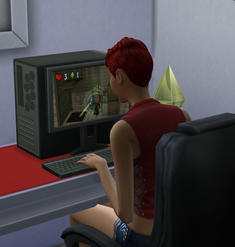 Video gaming is a skill in The Sims 4. It is unlocked by playing games on a computer, game console, Motion Gaming mat, tablet, or a mobile phone. It is primarily used to perform better in video games and in tournaments.

Video gaming allows Sims to perform better at video games, discuss strategies, enter tournaments, and more. Sims can build this skill simply by playing games; being focused will make it easier to develop this skill. Taking the Gamer branch of the Tech Guru career is the optimal career if focusing on this skill.

Traits that could be helpful for this skill are, as follows:

Retrieved from "https://www.thesimswiki.com/w/index.php?title=Video_gaming&oldid=955462"
Categories:
Hidden categories:
Cookies help us deliver our services. By using our services, you agree to our use of cookies.