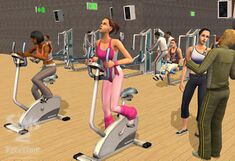 Sims working out in a fitness club.

For the similar skill in The Sims 3, see Athletic (skill).

For the similar skill in The Sims 4, see Fitness (skill).

Body is a skill in The Sims and The Sims 2. It determines the Sim's physical prowess and is useful in some jobs that require a Sim to be strong.

The animations for many activities change as a Sim's body skill increases. 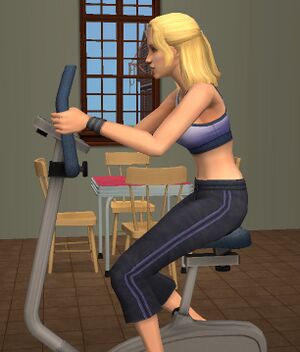 A Sim training the body skill on an exercise bike.

This section describes features that are only available in The Sims 2.

Most ways of building body skill can only be done by teens, adults and elders, but there are some ways kids can increase their body skill.

At first, it was believed that toddlers could gain body skill from singing the Nursery Rhyme[TS2:FT] after learning it. However, this was due to a glitch which caused the wrong pop-up message to appear when a skill point was gained. This was corrected in the FreeTime patch, though it does not appear in the patch notes.

Retrieved from "https://www.thesimswiki.com/w/index.php?title=Body&oldid=926290"
Categories:
Hidden category:
Cookies help us deliver our services. By using our services, you agree to our use of cookies.