A Sim telling a joke

Comedy is a skill in The Sims 4. The higher a Sim's comedy skill, the more successful their jokes will be and the more money they will receive for performing routines. This skill is essential for the Comedian branch of the Entertainer career. Raising this skill is also the main objective of the Joke Star aspiration.

Comedy skill is mainly built by practicing jokes on a microphone, writing jokes on a computer, reading comedy skill books and through funny interactions with other Sims. As Sims levels up, the unlocked options to write, refine and perform routines will also build this skill. Sims who are playful will build comedy faster. Goofball Sims become playful more often than other Sims, making the trait to be the perfect match for leveling comedy. Charisma can also help a learning comedy, as high levels in it boosts the success rates of jokes. 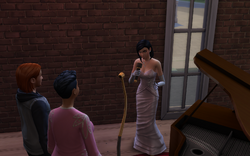 A Sim performing a routine.

When performing comedy routines, Sims can gain Simoleons from other Sims. There are different amounts of Simoleons gained for different base qualities; base quality for short is §75, medium is §125, and long is §200. The Simoleons that can be gained from the routines have the ability to be pumped up by refining the routine at the computer, when the Sim has reached level five in the skill. The routines also have four quality levels: poor, okay, good, and excellent, and can affect on how much Simoleons the performing Sim can gain. An excellent short routine pays §112, excellent medium pays §188, and excellent long pays §330.

After a Sim has achieved level 7 in comedy, they can start writing comedy books by using the computer. While these books aren't different from normal ones, they are a great source for Simoleons. The quality of comedy books aren't also decided by the writing skill. Instead, the quality is determined by how high the comedy skill is. Sims with the Professiorial reward trait from completing the Renaissance Sim aspiration are also able to write custom comedy skill manuals.

Retrieved from "https://www.thesimswiki.com/w/index.php?title=Comedy&oldid=967077"
Categories:
Hidden category:
Cookies help us deliver our services. By using our services, you agree to our use of cookies.