From The Sims Wiki, a collaborative database for The Sims series
(Redirected from Law Enforcement)
Jump to navigation Jump to search 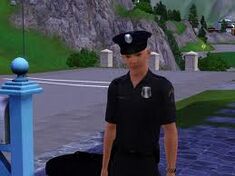 A Police officer in The Sims 3.

Not to be confused with Law or Police officer.

The law enforcement career is a base game career track featured in the The Sims, The Sims 2 and The Sims 3. It is also included in The Sims 4: Get to Work (where it is renamed to "detective") and The Sims FreePlay as an active career.

Of the ten career tracks that shipped with the base game, Law Enforcement had the second-highest pay at rank 1 and the second-lowest at rank 10, following a very similar pay curve to the Military and Politics career tracks. Its pay curve is also bent slightly upward, with bigger pay differences between the lower ranks than the higher ones. Requiring an average number of friends to reach rank 10, it is neither especially difficult nor especially easy to progress through. It is unique among all career tracks in that its rank 10 job is not a job at all, but a specific character: Captain Hero, also known as Maxis Man or SuperSim, a flying superhero from the Simcity games who would sometimes show up to fight disasters. Captain Hero is also the name of a character from the animated TV series Drawn Together.

Captain Hero will eventually change careers and become a TV Star in the Entertainment career track.

In The Sims 2, the career reward object is the Prints Charming Fingerprint Scanner. It is awarded at the Detective level and enhances a Sim's ability to improve the Cleaning skill. The scanner can also detect the last Sim to have used an object that is scanned and will display their picture with a thought bubble (If no Sim has used the object a random Sim is chosen). If The Sims 2: Apartment Life is installed, Jocks are likely to work in this career.

In The Sims 2, Captain Hero does not have a carpool, but flies to and from work. If the player cancels the Go to Work action, Captain Hero will not be able to go to work unless he or she has access to a car or Apartment Life is installed and can simply walk to work. The college majors associated with this career are Biology and Psychology.

Law is a career track in The Sims 2 (console), which is similar to the Law Enforcement career in other games in the series.

Law is one of the career tracks available in The Sims 2: Pets (console).

Law Enforcement is a career track in The Sims 3. It has two branches: Special Agent and Forensics. Sims will be required to write reports. This can be done by questioning Sims (though they will refuse, resulting in negative points for both Sims, if they don't like each other) or rummaging through their trash cans (literally digging the "dirt" on that Sim) and then selecting "write report on" in a computer. Sims who reach Level 3 of this career will be able to tackle burglars; even without the Brave trait. Sims with the Good or Coward traits, however, will still not be able to fight a burglar. 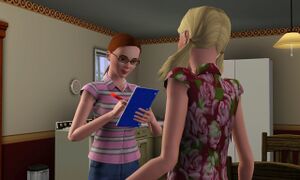 A policewoman interviewing another Sim in The Sims 3

How to apply: Computer or Newspaper/ Apply for job at Police Department

After the 5th level promotion, the player is given a choice between the two branches: Special Agent or Forensic Analyst. The big difference is in the Bonus actions that each branch gives, as the difference in the pay is lessened because the Special Agents end with a bigger pay per hour, but the Forensic Analysts have one more hour of work per day. International Super Spies can Raid the Criminal Warehouse, whilst Dynamic DNA Profilers can run Forensic Analyses, which play out like Hacking.

Your boss wants to ensure the public knows all about the officers patrolling the neighborhood. Take the time to visit three of your neighbors at their homes to get on your boss' good side and improve your chances for a promotion.

Read "Keep 'em Guessing". This is the only way to obtain the book.

Read "Protect, Serve, and Look Good Doing It". This is the only way to obtain the book.

Befriend (Sim). This opportunity is aborted if the sim you are supposed to befriend dies or moves out.

All Sims who enter the detective career will have two days of training. The first day involves shadowing for a veteran police officer in their cases. They will learn to collect evidence and take witness reports. They will submit a case report, after which the off-screen lead detective takes over the case. If there is still time remaining in the work day, the Sim will take mugshots, photographs and search prisoners. On day two, the Sim will patrol a community lot and learn how to issue a citation. The Sim may then go to a case to make an arrest. The notebook (accessible through the Sim's phone) is pre-populated with clues about the suspect.

In succeeding cases, the Sim will be responsible for every aspect of their cases, from getting a case assignment to getting a confession from the suspect.

After analysing evidence or cross-referencing pictures or witness reports, the Sim will need to add clues to the crime map. A minimum of three clues need to be processed and added to the crime map in order to issue an all-points bulletin (APB), but the Sim does not need to use all the clues gathered. If there are any unused clues, they can be carried over to the next case for analysis, thus saving time at the crime scene.

Description: "Do you want to be the type of cop who’s never really off-duty? If so, this job’s for you and we’ve got the rewards to support that unhealthy lifestyle! Unlock outfits like your Police Uniform to wear as pajamas. Teach your teen a valuable lesson for that C+ by dressing them in Prisoner Coveralls and transforming their bedroom into a virtual jail cell complete with Prison Bar Walls and a decorative Security Camera. As a bonus, you can keep an eye on them with your very own One-Way Mirror."

Retrieved from "https://www.thesimswiki.com/w/index.php?title=Law_enforcement&oldid=963594"
Categories:
Hidden category:
Cookies help us deliver our services. By using our services, you agree to our use of cookies.