From The Sims Wiki, a collaborative database for The Sims series
(Redirected from Logic (The Sims 3))
Jump to navigation Jump to search 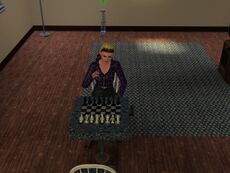 A Sim practicing her logic skill.

Logic is a skill in The Sims series. It is a valuable skill for many careers and playing games like chess. In The Sims: Makin' Magic, it improves spell casting, affects how many MagiCoins a Sim will get for performing on the stone stage or at the tricks tables in Magic Town, and may affect the performance of other magical acts.

In The Sims 2, logic also affects the odds of winning a chess game. With The Sims 2: University, teenagers with a high logic skill (level 8 or higher) qualify for the Will Wright Genius Grant, which is a §750 scholarship. Logic increases the rate at which a Sim earns the Register talent badge from The Sims 2: Open for Business. With The Sims 2: FreeTime, having high logic makes it easier for Sims to maintain high enthusiasm for the games and science hobbies. Additionally, all Sims in The Sims 2 who have 10 points in logic get a 35% boost when learning other skills, except for body and charisma. 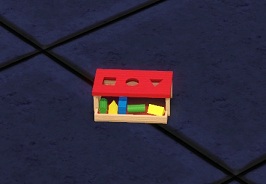 A toybox is good object for toddlers to study logic from the early ages.

In The Sims 3, logic is augmented by the computer whiz, genius, and perceptive[TS3:A] traits. With a higher logic skill, Sims can look through the telescope in many different ways. Sims are able to use the Catalyst Chemistry Lab Station to make potions.[TS3:G]

Grand Master
Chess Grand Masters have reached the coveted fifth level of the competitive chess circuit. There, they sit upon their throne, gazing downwards upon their victims. Those who engage Grand Masters in chess improve their abilities in logic and chess more quickly.

Celestial Explorer
Celestial Explorers have discovered 20 celestial bodies through their telescope. Their extensive knowledge of the heavens allows them to discuss the stars with their friends and neighbors.

Skill Professor
Skill Professors have spent at least 30 hours tutoring other Sims in skills. Because of this, they are much more effective when teaching skills to others.

Master Chemist
Master Chemists have discovered 10 potions. After learning every possible potion, they can create potions at a lower cost!

When using a telescope and searching the galaxy, a Sim will sometimes discover a celestial body. It may be a comet, planet, star, moon, galaxy, black hole, neutron or satellite. The Sim will then earn a small amount of money or up to several thousand (for discovering a black hole) for contributing to the scientific community.

Also, Sims may see a meteor fall from the sky and land somewhere in town. They can use Map View to find the land site and travel there to collect the space rock. There is also a chance that the meteor will fall on them.

Taking Down Sinclair
Challenge Argyle Sinclair at the Theatre before time runs out to earn some money.

Fixing the Books
Assist Accountants at the Business Office to earn some money.

A Stimulating Experiment
Participate in Study at the Science Facility before time runs out to earn some money.

Becoming More Logical
Improve your logic skill by one point, and tell the local scientists about that to earn some money!

Logic 101
Teach Logic Class at the School to earn some money.

Puzzle Panic
Assemble Puzzles at the Supermarket to earn some money.

Riddle Away
Complete in Contest at the Bookstore before time runs out to earn some money, and to improve your skill!

Fixing the Celestial Slump
Search Galaxy on your own telescope to earn some money, and to improve your skill!

Logic Tutoring
Skill tutor a Sim, and report it back to a location to earn some cash!

Tutor Me Please
Tutor a Sim to improve your relationship, and to earn some cash!

In The Sims 4 is augmented by the genius trait, as it will occasionally give a focused moodlet, with focused being the ideal emotion for building logic skill. Gaining logic skill is required for the Nerd Brain aspiration and also for some careers.

Similarly to the previous games, Sims with higher logic skill increase their chances of winning at games like chess. Logic skill is also tied to collecting, with benefits relating to this including the ability to collect and analyze plant, crystal and fossil samples at levels 2, 5 and 8 respectively. Also, Sims can unlock several Logic based interactions: 'Discuss Logic', 'Provide Logical Solution to Problems' and 'Rant Logically'.

Retrieved from "https://www.thesimswiki.com/w/index.php?title=Logic&oldid=281939#The_Sims_3"
Categories:
Hidden categories:
Cookies help us deliver our services. By using our services, you agree to our use of cookies.