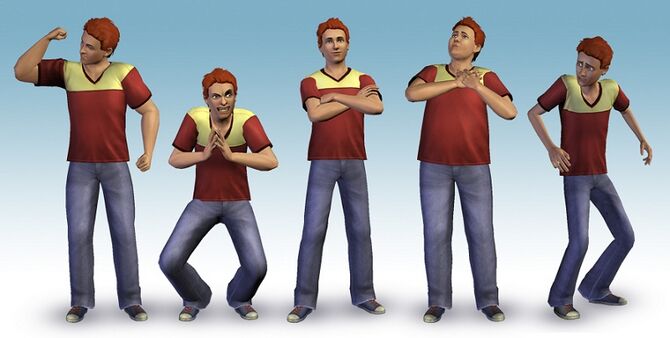 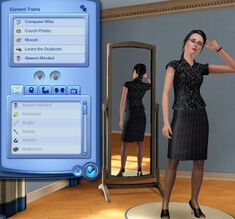 A Sim demonstrating the "Absent-Minded" trait

Traits are the building blocks of a personality assigned to Sims in The Sims 3, replacing the previous system of personality points. The traits also appear in The Sims Medieval; this time, traits are adapted to the Medieval period. They determine a Sim's behaviors, abilities, and their wishes, including their Lifetime Wishes. There are 63 traits in the base game. Three traits were added with World Adventures, six with Ambitions, one with Fast Lane Stuff, two with Late Night, two with Generations, four with Pets, three with Showtime, six with Supernatural, two with Seasons, three with University Life, two with Island Paradise, and two with Into the Future. Altogether they add up to a total of 99 normal traits.

Each trait is separated into one of four categories based on mental, physical, social, or lifestyle aspects of Sims' lives. For example, social traits may include dislikes children or friendly, while lifestyle traits would consist of technophobe or daredevil. Traits are used to allow Sims a greater complexity in their daily routines over the points system. The more traits a Sim has, the more complex they will be, as a Sim with more personality traits will exhibit a wider range of behaviors than a Sim with only one.

There are limitations on the traits a Sim can have. Foremost, two traits may not contradict each other, such as the good and evil traits, or the can't stand art and artistic traits. Such traits are inherently built around opposing behaviors and intrinsically preclude the occurrence of the other. In addition, Sims may be unable to obtain traits based on their age; one example being that babies are unable to have the charismatic trait or that only teens and older Sims can have the hopeless romantic trait.

Traits also grant Sims different abilities or specific actions which only Sims having those traits can do. Insane Sims are able to use the command "Talk to Self" to boost their own social motive, while vegetarian Sims are able to cook vegetarian alternatives to meals containing meat (though in Showtime, all Sims are able to cook these meals, regardless of traits). Some traits can grant Sims special moodlets, with loner Sims enjoying their solitude or hydrophobic Sims fearing swimming in the pool. Other traits allow Sims a greater affinity for certain tasks, such as angler Sims being more adept at fishing while genius Sims tend to learn more quickly. In this respect, the customization that players can give to Sims via the trait system can make the game more or less challenging while offering a greater deal of variety than was possible with the personality point system used in the game's predecessors.

Features comparable to traits in previous games in the series are Zodiac signs, interests, and personality.

As Sims socialize with others, they may reveal their traits from certain interactions. For example, asking a Sim's career will reveal if they have workaholic or ambitious traits, or flirting with a Sim will reveal flirty or unflirty trait. Learning traits can be beneficial to Sims. If the Sim has the same trait as the other Sim, they will get a compatibility trait as well as a relationship boost. On the other hand, if they have any conflicting traits, they will get a negative relationship.

Learning traits is very important for Architectural Designer profession. Learning a client's traits is important in order to satisfy their desired objects, such as placing bars for party animal clients, which will boost the scores. Aside from socializing, Sims can easily learn other Sims' traits from several methods:

Hidden traits are traits in The Sims 3 that cannot be seen in-game except when a Sim performs a related action autonomously or an unlocked interaction is available.

Hidden traits become available to Sims in specific careers, life states, or to babies with an NPC for a parent. The child might then get the appropriate hidden trait

This section describes features that are only available in The Sims 3: University Life.

Sims are born with two traits, and gain an additional trait on aging up from toddler to child, from child to teen, and from teen to young adult. Therefore, a fully-grown Sim has five traits. With University Life, it is possible to earn two additional traits, for a total of seven traits. The trait panel will still show only five traits, but when a Sim has more than five, a scroll bar will appear next to the traits.

The two additional traits are earned by:

Sims cannot earn the extra trait slots multiple times, for example, by reaching level 8 in all social groups or completing multiple majors. If the requirement to earn an additional trait slot is completed more than once, a prompt will appear that will allow reconfirmation or replacement of the additional trait.

There are a number of traits that were removed before the game was released. Some of them might be removed because they share similar purpose with an existing trait, or might raise the ESRB rating, while some others were removed unexplained. Some removed traits have their own icons in the game files, while some are only mentioned in the old game strings.

Retrieved from "https://www.thesimswiki.com/w/index.php?title=Trait_(The_Sims_3)&oldid=938518"
Categories:
Cookies help us deliver our services. By using our services, you agree to our use of cookies.