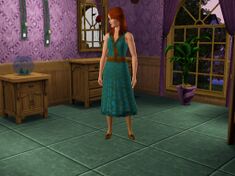 The Hit Movie Composer in The Sims 3.

A music career is available in The Sims: Livin' Large, The Sims 2: Seasons and The Sims 3.

The musician career track is one of the five Career Tracks from The Sims expansion pack Livin' Large. It has a similar pay at rank 1 and the same pay at ranks 9 and 10 as entertainment from the base game, but follows a much more bent pay curve along the way, with lower pay at every rank except 9 and 10, the fifth-lowest pay in the game at ranks 5 and 6, and the fourth-lowest pay at rank 7, beating only slacker, circus, and education. It also requires a higher number of friends to reach rank 10 than Entertainment does.

A Celebrity Activist will eventually change careers and become a Medium in the Paranormal career track.

The Music career was added in Seasons. The Career reward is The Rock Hammer. It is given at the Roadie level (Level 6). If Apartment Life is installed, Bohemians and Gearheads are likely to work in this career.

Music is a career track in The Sims 3. It has two branches: Rock and Classical.

How to apply: Directly at the workplace, newspaper, computer, or upload resume.[TS3:UL]

Sims in the Rock Star Branch can perform at the Theatre, but only between 3 PM and 11 PM.
Note: During a Sim's concert performance, anyone in the Sim's household who watches gets free passes.

After the 5th level promotion, the player is asked which path they want the Sim to take: Rock or Symphonic.

Floating in the Sea
Read Getting Noticed in a Sea of Fans, and return to work.

The Rockiest Road That Is Rock
Read Life on the Hard Rocky Road, and return to work.

Please, No Ego
Read Don't Upstage the Band, and return to work.

It's Shines, It's Sparkles
Read Diamonds in the Rough, and return to Work

Keeping the Rhythm
Read It's More than Rhyme Books, and return to work.

It's Synergy
Read True Symphonic Synergy, and return to work.

Becoming a Legend
Read Legends of Rock, and return to work.

The Greatest Symphony Ever
Read Improving Conductivity Between Brass and Woodwinds, and return to work.

Learn That Tune!
Learn the composition in your inventory, and return to work.

Fling the Application
Submit an application at city hall!

On Tour!
Perform 3 concerts at the Theatre

The Set Up
Help Set Up at the Theatre before time runs out!

The Cinematic Score
Play a Symphony at the Theatre before time runs out!

Audio Study
Listen to the stereo until your Sim is enjoying the Music!

Music Class!
Teach Class at the School before time runs out

Stick Around for the Music
Stay Late at Work

Retrieved from "https://www.thesimswiki.com/w/index.php?title=Music_(career)&oldid=967216"
Categories:
Hidden category:
Cookies help us deliver our services. By using our services, you agree to our use of cookies.