A ghost hunter in action.

The ghost hunter profession is introduced in The Sims 3: Ambitions. Sims use various machines to trap or ward off ghosts, similar to the Ghostbusters film franchise, and the Nintendo GameCube game, Luigi's Mansion as well as its 3DS and Nintendo Switch sequels.

Ghosts and lesser spirits will randomly appear in occupied houses around neighborhoods. These ghosts range from small, floating cartoon ghosts to regular Sim ghosts. [1] Ghost hunters must deal with several different types of investigations and paranormal activity in order to advance.

Lesser spirits are the weakest form of paranormal activity. Lesser spirits resemble wispy Halloween ghosts. They come in many colors, which represent their personality. Certain personalities are more valuable than others. For example, white spirits (who have a friendly personality) aren't worth much to researchers while orange spirits (who are wrathful) are worth more.

Lesser spirits can also be collected and named like beetles and butterflies. They can even be transfigured, which will produce a tombstone with a normal ghost.

The player's Sim can also try to collect spirits from any places at any time using the Spook-O-Meter to make them visible, which apparitions should have been detected by Spirit Positioning Device. (To get the Spook-o-Meter a Sim needs to be level 5 in this career)

Poltergeists possess random objects, causing them to move and fly around. Poltergeists are not very powerful, but they are stronger than lesser spirits.

Ghosts are the most powerful of all paranormal activity. They are very hard to capture, but ghost hunters may alternatively attempt to befriend a ghost and convince them to move on.

Occasionally, ghost hunters may encounter ghosts from past civilizations. These ghosts are worth more money when sold to the science lab.

Spirit invasions are the most basic of hauntings. Lesser spirits are much less powerful than full bodied ghosts, and are visible at all times. Ghost hunters need only use the banshee banisher to remove the lesser spirits. If the spirit manages to escape the ghost vacuum, they will scare any non-brave sim.

Occasionally, a ghost hunter will be asked to investigate a random rabbit hole. The ghost hunter need only enter the venue and stay for a few hours to complete this investigation.

During a poltergeist haunting, the ghost hunter must exorcise furniture that is being possessed by poltergeists.

If a Sim has the kleptomaniac trait, they will not discriminate between possessed and normal objects.

If they swipe a possessed object, it will no longer be haunted after it has been placed into their inventory, even if it is later returned in the mail. However, this cleansing will not count towards the required exorcism count, rendering the mission incompleteable. There is a chance that this same mission will now be offered every future evening. The (incomplete) progress will be saved, rendering this particular exorcism mission permanently incompleteable.

This is similar to the previous job, but ghosts are visible from the start. They are scaring Sims and using house appliances. There will also be frightening background music during the exorcism.

Apart from that, this job is the same as above. Actually it is easier, as the ghost hunter doesn't have to spend time searching them.

Paranormal Profiteer is a new lifetime wish that can be fulfilled by reaching level 10 of the ghost hunter career. [2] 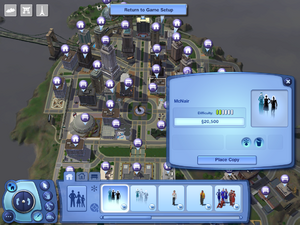 Ambitions ghosts (From the ghost hunter profession) in the library from The Sims 3: Outdoor Living Stuff.

Retrieved from "https://www.thesimswiki.com/w/index.php?title=Ghost_hunter&oldid=957903"
Categories:
Hidden category:
Cookies help us deliver our services. By using our services, you agree to our use of cookies.