Male firefighting Sim with an axe

This article is about The Sims 3: Ambitions profession. For the emergency NPC, see Firefighter (NPC).

The Firefighter occupation is a profession in The Sims 3: Ambitions. Firefighters work at the Fire Station lot.

Athleticism and handiness are useful in this profession.[1] In-depth tasks include upgrading and maintaining both the station's alarm system and fire truck as well as socializing with fellow co-workers. The Fire Station is a robust lot that can fulfill all your Sim's needs and provide skill training when on standby, but when the fire alarm goes off, it means dropping everything and racing to the site of the emergency which might be a small house fire, large house fire, gnome invasion, earthquake, or rabbit hole based emergencies such as an experiment gone catastrophically wrong at the science lab.[1] Firefighters are given a letter grade (A through F) based on how quickly they are able to deal with an emergency. Handy Sims can upgrade the fire alarm to respond sooner to emergencies, upgrade the fire truck in 3 increments to increase its speed, and upgrade their personal fire extinguisher to put out fires faster.

Instead of being paid per hour, Firefighters are paid a weekly stipend with a cash bonus after every emergency they handle. Additionally, the 'job performance' bar has been replaced with the 'job experience' panel that must be filled before a Sim can receive a promotion. The job experience panel is filled by Sims handling emergencies, increasing athleticism and handiness, and befriending coworkers. Experience is lost when Sims miss work, are unfriendly to co-workers or fail to handle an emergency.

The two most common emergencies are small and large house fires. For small house fires, a firefighter need only to locate and extinguish a fire on a designated lot. However, during a large house fire, several new elements are introduced including window fires, breaking down doors and evacuating victims. Window fires must be put out before the firefighter can attempt to break down locked doors with an axe. Victims trapped inside will remain in one place panicking until they are rescued or die. Once a firefighter has reached a victim, they must use the "Convince to Run" interaction to get them to leave the building. Babies, toddlers, and children must be carried out by the firefighter as they are too scared to run on their own. Less than moral firefighters can also choose to steal objects in the confusion when no one is watching.

The appearance of the firefighter uniform in the trailer and screenshots appears drastically different than the one on the game cover and those seen in the base game. The clothes seen in earlier trailers are new outfits, while firefighter Sims will wear a uniform while on duty, and the base game's firefighter suit when responding to an emergency. 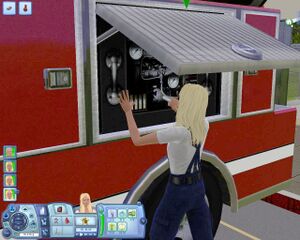 A Sim maintaining the fire truck.

Flames appear in a random household, the firefighter must put them all out.

The Sim must accomplish this task in under 3 hours for an A ranking.

1-4 Sims are trapped inside a burning building. Your Sim is tasked with saving their lives and putting out the fire. Firefighter tasks include:

The firefighter has 4 hours to achieve an A ranking in this type of task.

A household will be 'attacked' by Mysterious Mr. Gnomes. The firefighter simply needs to capture 2-5 gnomes.

The gnomes teleport if left for too long without being captured. Also feel free to kick the angry gnomes.

Can happen in any rabbit hole in the city. Firefighter simply goes into the rabbit hole and comes out when the job is done. Disasters include:

The Sim has 3 hours to finish this event for an A ranking. 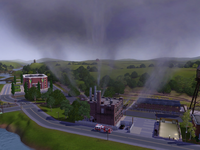 This is the most difficult task of them all.

This event can happen at any time. The player's screen shakes and a message appears prompting the firefighter to check out the fire station to see if they need help. One house at a time, the firefighter must:

Usually the firefighter must rescue three households before the earthquake event is finished. The event timer restarts after the firefighter completes the previous house.

There is currently a glitch with the firefighting career in which a Sim puts out all the fires, captures all the gnomes, leaves the venue after one hour, etc., but the mission clock still runs. Sims around the house will still be doing the "Simlish fire dance" and the mission will not end until the Sim leaves the lot, resulting in mission failure and loss of job experience. This cannot be avoided for now, but the issue may be fixed in a future update. This glitch can also occur in the ghost hunting career track, where the mission doesn't end even after all the spirits have been caught. Loss of job experience can be prevented by using the Professional Slacker Lifetime Reward.

A dog calling via phone to say thank you. 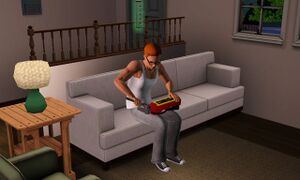 A firefighter upgrading their extinguisher.

Retrieved from "https://www.thesimswiki.com/w/index.php?title=Firefighter&oldid=948462"
Categories:
Hidden categories:
Cookies help us deliver our services. By using our services, you agree to our use of cookies.