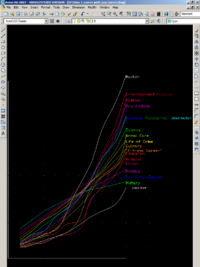 The pay curves may not have a clear hierarchy from best to worst, but they do have a clear best and a clear worst

In the base game, career tracks that had the highest pay at rank 1 had the lowest pay at rank 10, and vice versa. The slacker career path upended that expectation by having the lowest pay in every single rank out of all 15 career paths that existed at that point. In return, the hours were generally shorter, giving the Sim more time to build friendships, clean up around the house, piss on the floor, or do whatever they would rather be doing than working. However, reaching rank 10 required more friends (15) than any other career track except politics and paranormal, so all that extra free time typically got wasted on inviting the neighbors over and chatting with them for hours just to get promoted. Later, The Sims: Unleashed expansion would add two career paths (culinary and circus) whose severely bent pay curves dipped below that of the slacker; however, slacker's pay curve was still the lowest and flattest overall. Out of all 20 real careers from The Sims and its expansion packs, slacker also has the absolute worst ratio of pay to friends required to reach rank 10 ($600/15 friends = 40), making it the least rewarding career track to climb. Only politics even comes close ($750/17 friends = 44.1).

A Professional Party Guest will eventually change careers and become a Back-up Musician in the Music career track.

The Slacker Career returns in The Sims: Bustin' Out as a Free Play exclusive Career.

Slacker is one of the ten basic careers in The Sims 2. Similar to the Slacker career from Livin' Large, it's one of the lowest paying careers. Also, it requires the fewest skills of all careers for promotion, though it does require a high number of friends at the upper levels. If The Sims 2: Apartment Life is installed, Gearheads are likely to work in this career. College majors associated with this career are Philosophy, Literature and Art. The career is usually a want of a Sim with the Romance or the Pleasure aspiration, but can be chosen by any Sim at the age of teen, adult or elder. The career reward object is an AquaGreen Hydroponic Garden. It is awarded at the Party DJ level and builds the creativity skill.

Oddly enough, the work uniform for teens and elders at the top of their career, working as "Convenience Store Clerks" wear the red fast food worker uniform for the culinary career, instead of the yellow and green shop assistant uniform adult sims wear at this level. This was presumably an error by the game developers.

Retrieved from "https://www.thesimswiki.com/w/index.php?title=Slacker&oldid=967196"
Categories:
Hidden category:
Cookies help us deliver our services. By using our services, you agree to our use of cookies.