A chance card is a randomly-occurring game event, happening usually while a Sim is at work. Chance cards present the player with two choices, with both choices having positive and negative potential outcomes. These outcomes can result in a Sim receiving a bonus or getting fined Simoleons, gaining or losing skill points, getting promoted, getting demoted, or getting fired. Chance cards were introduced in The Sims 2 and The Sims Stories, and appear - in a much more limited form - in The Sims 3 and The Sims Medieval.

Some jobs in The Sims had work-related dialog boxes that could appear when Sims returned from work. While these would state a situation that had happened during the Sim's workday, and apply a result of that situation, they did not present the player with any options or decisions. These were called chance cards, but the only chance involved was whether or not they would appear. 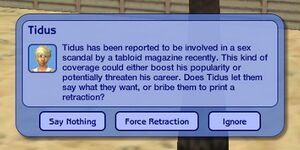 A chance card in The Sims 2.

Any time a Sim is at work, a Sim can encounter a chance card. The game presents the player with a scenario in the form of a text box describing a predicament or situation, and a decision a Sim must make. The player can choose one of two options (or press ignore) to complete the scenario. Ignoring a chance card has no good or bad effects. Chance cards may appear randomly during the Sim's workday. If a Sim is promoted, demoted, or fired due to a chance card outcome, he or she will come home immediately. If the Sim took the carpool to work, he or she will return in the carpool for his or her new job. If the Sim is promoted to a job that uses a helicopter as the carpool, he or she may not be able to come home until all service vehicles have left.

With The Sims 2: Bon Voyage, Sims can also encounter a chance card while on vacation. While on vacation, a Sim can go on tour, and chance cards will involve the tour. There are numerous outcomes to all the tours. An example: Your Sim is at Twikki Island and has gone on the island flyover in the helicopter- A bee finds its way into the helicopter. Your choices are to kill the bee, free it, or Ignore it. One of them probably gets the Sim stung. Once an option on the card has been selected, the Sim returns immediately from the tour.

With The Sims 2: FreeTime, Sims can encounter chance cards related to their hobbies while they are at school or work. As with other chance cards, they can choose one of two options, or choose to ignore the card. While these hobby chance cards usually affect the Sim's level of enthusiasm for that hobby, some chance cards that involve at-work situations can lead to a demotion or promotion. Some may result in the Sim bringing home another Sim who also has enthusiasm in that hobby. That Sim may not be in the same career track, and, if The Sims 2: University is installed, may be a young adult. Hobby chance cards which involve at-work situations are the same for all careers, and it appears that they tend to be described as if the Sim were in an office or business context.

The "good outcome" answer is randomly chosen after the choice is made, weighted towards the moral choice.[1] The amount of weighting that's applied varies from job to job. Depending on the job, the chances of the player's choice having a positive (or negative) outcome can range from nearly 50% to 85%.[2] The exception is with The Sims 2: FreeTime, in which the aspiration benefit Business Instinct can be chosen. With this benefit, all choices for career chance cards have an 80% chance of success, even those that would otherwise have a greater chance of success. By choosing this benefit for a Sim, the player trades a reduced chance of success for many choices for the certainty that any choice will have a high chance of success.

Sometimes, there is a chance of the rare double promotion, as is seen when an Executive in the Business career is promoted to Vice President, skipping the job level of Senior Manager. There are even a few extremely rare chance cards that can bring a Sim from the middle of a career track to the top. For example, one possible outcome of the chance card for the Rogue Botanist (level 6) job in the Natural Scientist track is promotion to Ecological Guru, the top job in that track.

A map of how a result is determined is as follows:

Given choices A and B:

Chance cards do not appear much in The Sims 3, as they were generally replaced by job opportunities. There are still a few chance cards that appear, which usually occur from off-screen event or during a rabbit hole visit. Choosing an option or decision will notify the outcome, and the results may reward Sims some moodlets, money, or other outcomes such as promotion, demotion, or getting fired. Unlike The Sims 2 and The Sims Stories, they involve less detailed scenarios and there is no ignore button.

Adventures, such as through a mausoleum, the Arboretum, a hole in the ground, a time machine, or a magic wardrobe, involve multiple chance cards.

In The Sims Medieval, chance cards may appear if a Hero Sim is shopping at the Shoppe (even if no items were bought or sold), sleeping in a bed, on an Adventure, Hunting, or Patrolling the forest.

As in other games, some choices will have negative effects. For example, when Help Muggers fails, the Sim will be arrested (unless he or she a Monarch) and will get a Major Laceration buff. As in The Sims 3, there is no ignore button.

Chance cards can also appear on a quest.

Adventures, such as via the rocket-ship, involve a series of chance cards, one following the other.

While there is no Ignore button in these chance cards, the second decision will always result in having no impact.

Retrieved from "https://www.thesimswiki.com/w/index.php?title=Chance_card&oldid=911286"
Categories:
Hidden categories:
Cookies help us deliver our services. By using our services, you agree to our use of cookies.