From The Sims Wiki, a collaborative database for The Sims series
(Redirected from Taxi)
Jump to navigation Jump to search

A taxicab (also called a taxi or cab) is a car that's driven only by a special NPC Sim, which serves as a mode of public transportation. In The Sims and The Sims 2, Sims must call a taxi in order to travel to community lots. The only other ways to travel to other lots are via A Hole in the Ground from The Sims: Makin' Magic, owning and driving a vehicle from The Sims 2: Nightlife, and using the "Walk to Lot..." interaction introduced in Bon Voyage. Taxis in The Sims 3 arrive without being called, and appear only for Sims that don't have a vehicle of their own. In all games, taxis initially pick up passengers of only played Sims and a party that has at least a teen or older Sim.

Taxicab in The Sims 2

In The Sims 2, all taxis except for the Bon Voyage vacation shuttles are yellow Heaveola Landwhales, and they are free. If Bon Voyage is installed, the shuttles for trips to Takemizu Village, Twikkii Island, and Three Lakes will be a different color for each vacation destination. They will wait outside the house honking their horn until the Sim(s) get in. If they do not get in, the taxi will eventually leave.

A taxi can also be called from any sub-neighborhood to visit its community lots. Households that are in the main neighbor, the attached business district or downtown can travel between their community lots and back. If University is installed, only young adults can use them to go to a college sub-neighborhood. Also, they do not go to the Bon Voyage vacation destinations. Leaving a lot will save the game, so when the Sim(s) come back, everything will be just as they were left as. Sims' wants and needs will change during trips to community lots. This also happens when using the cars in the Nightlife expansion pack. Prior to Bon Voyage, Sims could either go by themselves, go as part of a group[TS2:NL]+, or take their entire family with them. If Bon Voyage or later is installed, players can individually select which Sims they want to go and which they do not. This is the same for cars and walking to lots.

A taxi will have a visible driver, drawn from the same pool as the carpool drivers. It is not possible to play as one of these drivers without causing neighborhood corruption. 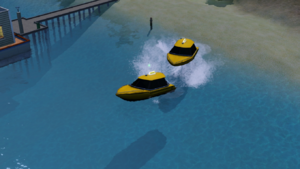 Two Taxi Speedboats as they appear in The Sims 3: Island Paradise
Due to the "Open Neighborhood" concept of The Sims 3, it is no longer necessary to use cabs to travel between lots; however, they still exist and resemble the 4-door version of the Yomoshoto Evasion. In Bridgeport and other worlds that are defined as city, fake taxicabs are generated to give the illusion of a bustling city, although these fake taxis do not contain any real sims or NPCs.

Sims will take cabs to travel to a destination that's considered too far to reach on foot, as long as it's connected to the road. Unless a teen or adult family member is with them, children do not take cabs and instead ride bikes, even if they do not own one. Sims also take a taxi when they carry a baby or a toddler even if they have a car or bike in their inventory. Sims will also take a cab without the player's control when moving out, taking a vacation trip[TS3:WA], or with a special van after enrolling to university[TS3:WA]. If the The Sims 3: Pets is installed, dogs and cats will use taxi to transfer around the world they're in.

In sub-neighborhoods, Sims do not take a cab to travel around. Instead, another vehicle will replace the cab for Sims, even if they don't own the vehicle. Cabs in Champs Les Sims and Al Simhara are replaced by The Kenspa, and bicycle in Shang Simla and Sims University as the default transportation for a distant travel. In The Sims 3: Into the Future, Sims will take a hover cab in Oasis Landing.

A rumor that a quirky Easter egg had the drivers of cabs being ducks has been proven untrue. At the Creator Camp, they had duck drivers because they had not designed the drivers yet. In the final version, Sims drove the cabs.[citation needed] 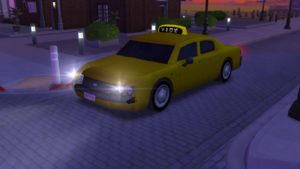 A Taxicab as it appears in The Sims 4: City Living

Taxicabs appear once again in The Sims 4: City Living. Unlike the previous games however, they are for decoration purposes only and are not rideable by Sims. They spawn primarily to replace other cars in San Myshuno.

The cars have a more boxy and less realistic appearance compared to their counterparts in The Sims 3. They also have a longer trunk and the side mirrors are placed on the doors. Also, instead of an advertisement-looking board, they have a "Taxi" sign written in Simlish and the license plates are colored pink.

Retrieved from "https://www.thesimswiki.com/w/index.php?title=Taxicab&oldid=949191"
Categories:
Hidden category:
Cookies help us deliver our services. By using our services, you agree to our use of cookies.