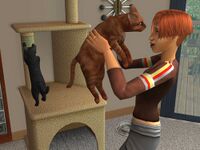 A female Sim playing with her cat in The Sims 2: Pets.

Cats are pets that can be bought or sold in The Sims: Unleashed, The Sims 2: Pets, The Sims 3: Pets and The Sims 4: Cats & Dogs. They are one of the more common pets that Sims can own, along with dogs. In some games, such as the GBA Sims games, they are not something that Sims need to take care of much, aside from petting them and cleaning up their messes; they are mostly for show.

In the PC and console versions of all the pets related expansions, they are one of the main parts of the game, in that they must be fed, given attention, played with, cleaned up after, and watched over.

Some of the cats that can be selected in The Sims: Unleashed.

Cats were first introduced in The Sims: Unleashed. A family can adopt a cat by going to the Pet Center in Old Town, or a Sim can befriend and adopt a stray. The Create a Sim section of The Sims does not allow players to create pets.

Skills for cats are obedience, tricks, and hunting. Cats may hunt cockroaches, mice, and garden pests on their own. They can be told to hunt mice and garden pests, though they will not always do it.

The pre-made cats belonging to playable households in The Sims: Unleashed are: 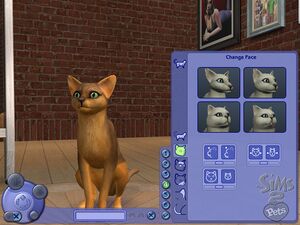 In The Sims 2: Pets, cats also must be trained so they can live with Sims. The player can do this by scolding them if they don't want them to do something that is bad, e.g., destroying furniture, or by praising them to encourage a behavior. For example, cats can be trained to be filthy or clean, and cats may get up on tables to eat Sim food unless they have been trained to prefer pet food or to stay off furniture.

After a cat becomes an adult, a Sim can stroke the cat, pick it up and hug it, or feed it a treat, although they can no longer be held and carried around. Sims can play with a full-grown cat by pulling out a cat teaser, tossing the cat in the air, or wiggling their fingers at it. The cat teaser and finger-wiggle games will continue until canceled by the player, or until the cat or Sim ends them through free will. Cats generally enjoy these things, but when playing the finger-wiggle game, a cat may eventually become annoyed and scratch the Sim, which will lower the relationship between the two. Cats may also occasionally pounce at Sims and scare them; the frequency of this interaction does not appear to be based on their personality or their trained behaviors.

Unlike their counterparts in Unleashed, kittens in Pets are mobile and largely self-sufficient. They can feed themselves (provided there is food available), use a litter box, and sleep on pet beds without the help of a Sim or their mother. Kittens can also learn behaviors. However, they cannot go up or down stairs without the help of a Sim and they cannot get jobs or learn commands.

If Apartment Life is installed alongside Pets, Witches can have a Spectral Cat as their Familiar. The spectral cat will never age, has no gender and is unable to breed. It also doesn't have the bladder need, so litter boxes are unnecessary, although they can learn how to use the toilet. If one of its need bars ever gets too low, or if the summoning witch leaves the lot, it will vanish, but can be resummoned with the same spell with its needs full.

The pre-made cats belonging to playable households in The Sims 2: Pets are:

Cats in The Sims Pet Stories are just like the ones in The Sims 2: Pets, with no differences. They largely take a backseat role in this game.

The pre-made cats belonging to playable households in The Sims Pet Stories are:

All three neighborhoods of Sims Pet Stories also feature a full predetermined list of both stray and adoptable premade cats and dogs, that differ for each neighborhood and do not match the Sims 2: Pets lineup. 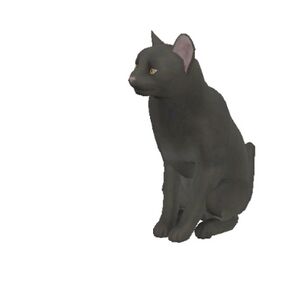 Cats return in the fifth expansion pack for The Sims 3, The Sims 3: Pets. Like Sims, cats have traits of their own. Initially, they are assigned three traits.[1] Unlike The Sims 2: Pets, cats have only six needs: hunger, bladder, energy, social, fun, and scratch.[2]

Unlike dogs and horses, cats have no traits that are unique to them, but can develop traits over time. This means that even though a cat is not born or made with a certain trait, it may develop it over the course of its life. For example, a cat that plays with toys often can develop the playful trait, or a cat that grooms him/herself often might develop the neat trait.

Cats are able to hunt for and bring home collectibles that a Sim can keep in terrariums or send off to the science facility. Cats with the hunter trait are especially adept at this, but all cats must first be trained, either by a Sim or by a pet toy. They will then develop hunting as a skill, which they can level up as they get better at it. The higher level hunter a cat is, the more likely it is that it will catch something other than leaves, feathers, or snake skin. A trailer for the console version of the game shows a cat banishing a ghost from the lot.

For the first time in the series, cats can be given a bath by an older Sim but will require a high level of relationship. A lower relationship will result in the Sim being scratched. Cats can develop fleas which can spread to other pets and giving it a bath will help remove them.[confirmation needed]

Cats can breed if a pet house is present, and will give birth to several kittens if there are not already more than 8 Sims in the household. In order to have a larger litter of kittens, Sims may buy the lifetime reward "Fertility Treatment for Cats." It takes about 2–4 days from conception till the kittens are born. Whenever a cat becomes pregnant, the same music that sounds for Sims will be played. Kittens are not able to do things that adult cats can, such as climbing stairs and playing with toys.

The world that comes with Pets, Appaloosa Plains, includes a cat jungle where players can take their cat to play and meet other cats.

If the Supernatural expansion pack is installed, a witch who owns a cat will receive the "Animal Familiar" moodlet, which boosts their spellcasting skill.

The pre-made cats belonging to playable households in The Sims 3: Pets are: 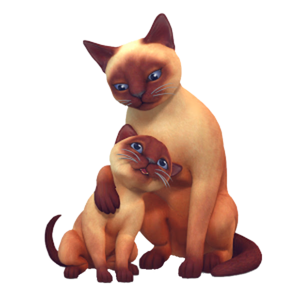 Cats return as one of the two major pets in The Sims 4: Cats & Dogs. Cats offer new gameplay interactions and features, but they are not directly controllable by the player. Using mods reveals that cats' needs are bladder, hunger, energy, play, affection and bowel.

Cats usually wander away from the home lot and go explore the neighborhood surrounding them. Brindleton Bay neighborhoods are also full of various piles of fish and bushes, that cats can investigate on their own. They are able to hunt down birds and bring back all sorts of feather collectibles that Sims can put on their walls to serve as decoration. Cats will also sometimes bring home mysterious boxes that Sims can open to gain pet toys. Cats with the prowler or free spirit traits are especially good at hunting and collecting.

Cats who are exploring may sometimes get into a fight with a wild animal, giving them chances of becoming sick. Cats, like dogs, have various forms of illnesses that they can get infected by. Sims can go to vet clinics to get their pet cured, or if they have developed the veterinarian skill, cure the cat with their own methods.

Cats are very mobile and can jump onto counters, tables, and even refrigerators, if there is a counter next to it. Cats can't be bathed by Sims and will always clean themselves if they ever get dirty. Cats will use litter boxes on their own and will sometimes complain to Sims for them getting dirty, making the owner to clean the filthy litter. Cats can also develop various fears or interests towards objects. For example, cats can become interested towards toilets and stare at them for long periods of time during the day, or they can develop a fear towards dishwashers, making them scared every time the object is on. Cats will usually sleep on couches, cat condos, and on their owner's bed, if there is room. They can also ride robot vacuums.

Cats have a few unique traits, but others they share with dogs. For example, both cats and dogs can be friendly, and the talkative trait in cats is equivalent to the vocal trait in dogs. Selecting a pre-made cat breed in Create a Pet will automatically add a suitable (but removable) trait or two. Cat traits affect how they perform, hunt and are interested towards Sims.

Raccoons exist as well and are present as a breed for cats. Raccoons have unique voices and can be created in Create a Pet. The default traits for raccoons are territorial and mischievous. Aside from their appearance and voices, however, they act and behave like normal cats.

The pre-made cats belonging to playable households in The Sims 4: Cats & Dogs are:

Retrieved from "https://www.thesimswiki.com/w/index.php?title=Cat&oldid=938598"
Categories:
Hidden categories:
Cookies help us deliver our services. By using our services, you agree to our use of cookies.