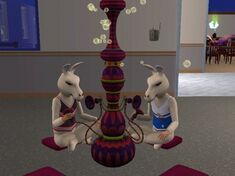 The Llama (Lama glama) is a South American camelid, widely used as a pack animal by the Incas and other natives of the Andes mountains. In South America llamas are still used as beasts of burden, as well as for the production of fiber and meat.

Llamas are a recurring theme in The Sims series, where there are numerous references to them, including a baseball team named after the animals. Apparently the llama is the national animal of SimNation. Many items in buy mode have llamas on them, or refer to llamas. The "Let There Be Light Laser Show" draws a llama, and a lot of computer activities or hacking opportunities involve (you guessed it) llamas. The University expansion for The Sims 2 and the University Life expansion for The Sims 3 have mascots that are dressed as llamas. Judging from the cheer that they and the cheerleaders do in The Sims 2: University, the Simlish word for "llama" appears to be "gerbit".

There are endless references to llamas in this series. 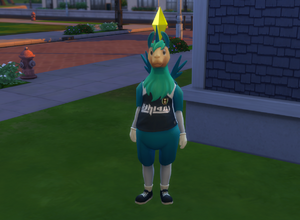 Appearances in other Will Wright games[edit | edit source]

In a December 2000 Interview with CNN, Will Wright, creator of The Sims, stated "many years ago, we had a company-wide vote for our informal company-wide mascot, and the choices came down to the Boston tree fern, beef tape worm and a llama. And somehow the llama won the vote!" From then, llamas became a running gag in franchises associated with Maxis and Will Wright.