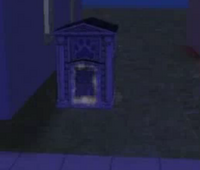 Not to be confused with Pregnancy.

To have more little bundles of fur running around the house, consider breeding pets. Keep in mind that each pet will take up a family slot. In The Sims: Unleashed, a lot can only have a total of eight pets and Sims in one house. In The Sims 2: Pets, a lot can have a total of ten Sims and pets, but no more than eight Sims and no more than six pets. Obviously, the basic thing needed for breeding is two pets of the same species and different gender. However, they can't just be made to breed on command. Just like Sims, they will need to get to know each other first. If they misbehave with one another, use 'Scold' so they learn to get along.

In The Sims: Unleashed, when two pets of the same species and opposite sexes perform the "snuggle" interaction, the player will get a message asking whether or not to go through with the breeding process. Just like having a Sim baby, a new item appears; a "maternity tent", which the mother will regularly check on if she's in a good mood. The player doesn't have to take care of the puppy or kitten (although they can view the tent), but they do have to take care of the mother, since her mood will reflect on her baby. Unhappy mothers will neglect the puppy or kitten, in which case animal control will come to take it away. If the puppy or kitten is not taken away, it will become an adult after three days. At that time, the player must choose whether the family will keep the new pet or give it up. If the player chooses to keep it, the new adult will appear, and can be named. Otherwise, if the player chooses to give it up, it will disappear from the game, and the family will get some cash. The cash earned can be anything from §250 for two parents with very low skills to §3,000 for parents with maximum skills. A kitten or puppy produced by breeding will have no personality points.

The exact formula is:

In The Sims 2: Pets, a pet house is required. This allows the player to have the selected Sim command a pet to try to have puppies/kittens with another pet. The Sim must have a good relationship with the selected pet to successfully command it. Additionally, the two pets must also have a good relationship with one another. If successful, the two pets will go into a pet house and WooHoo. If the female pet becomes pregnant, the player will hear the same music that plays when a Sim conceives.

Pregnant female pets show little noticeable signs of pregnancy; they will not appear visibly pregnant and can go to work as normal. However they do suffer from the same need penalty as a pregnant Sim. Unlike Sims, there is an element of randomness in the length of the pregnancy, meaning it could last anywhere between two and four days. When the pet is about to give birth, a sparkle and glow surrounds her. A pregnant pet can give birth to anywhere from 1 to 4 puppies or kittens, though the maximum size of a litter depends on how crowded the Sim household is. (A household cannot contain more than 6 pets or more than 10 members.) 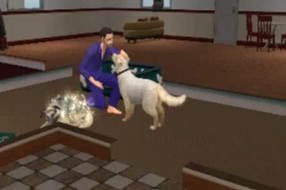 This female is glowing, meaning she is giving birth.

The player has the option of keeping a pet's offspring, giving them up for adoption or selling them. The simoleons earned by selling the litter is based on how well trained the pet is. More training equals more simoleons.

Note: Due to a bug, pet pregnancy controllers are not deleted when a pet gives birth. Mods designed to fix this problem are available at Simbology and Mod The Sims.

In The Sims 3: Pets, dogs and cats can have litters like in The Sims 2: Pets. Pets are controllable, and with a high relationship, can be told to use the pet house to WooHoo. If a litter is conceived, lullaby-like music will play. If it does not play, then another attempt is needed.

Horses and unicorns can try for one foal at a time. A stall box is needed for mating to occur. Both horses must have a high relationship with each other, and after socializing for a while, a "Romantic..." tab will appear in the action menu. Leading a non-unicorn mare to the equestrian center is possible if there is not a stallion to breed with. If the latter is done, conception is guaranteed.

Pet pregnancy is more noticeable here than in The Sims 2: Pets. A pregnant pet will experience the same need penalties as human Sims and will tend to prefer walking over running. They eventually gain a positive moodlet about their pregnancy much like Sims do, but will not be visibly pregnant. There is no labor stage either; when it's time for the birth, the pet will simply stop what they're doing and give birth.

In The Sims 4: Cats & Dogs, dogs and cats can have litters of 1-3 offspring, depending on space in the household and randomness. To breed two animals, a Sim must first become friends with one of them. The two pets have to be friendly with each other or else one of the pets will just walk away. After that, the option "Encourage to Mate..." will show up and that will allow Sims to choose another pet to breed their pet with. About a day after the pets breed, a notification may pop up saying that their cat/dog is expecting. 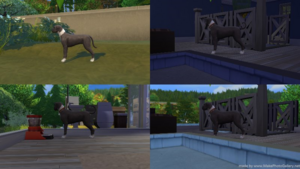 Unlike previous games, pet pregnancy is shorter than human pregnancy, taking roughly one day to complete. The pet will look visibly pregnant (though it is more noticeable on slimmer pets) and while they are supposed to have the same need penalties as pregnant Sims, a coding error prevents them from taking effect. A mod has been made that fixes this, so that pregnant pets will have their intended need penalties.

As the pregnancy nears full term, a notification will show up saying that the pet has gone into labor. During labor, the pet will be visibly uncomfortable, regularly panting and pacing around the lot, but they will still be able to perform most actions available to them. There is no need to take in-labor pets to the vet for the birth. The pet will eventually lie down and give birth on its own, and a screen like the one for a Sim birth will show up, which will allow the player to name the offspring.

Only females can be in heat. When an animal is in heat, red hearts will float around the animal in a circle. A sparkle sound effect will happen each time the animation is played. The animal will also have a red heart in their thought bubble, exactly like the thought bubble when Sims flirt (in Sims 4). The option entitled "Encourage to Breed..." will be listed and you may choose which cat or dog they will breed with. They may not succeed in breeding and you will have to wait until the next time your pet is in heat.

Retrieved from "https://www.thesimswiki.com/w/index.php?title=Breeding&oldid=964473"
Categories:
Cookies help us deliver our services. By using our services, you agree to our use of cookies.