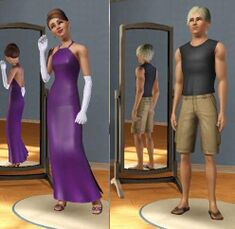 Female and male Sims in The Sims 3.

In all games in The Sims series, there are male and female Sims who can generally be distinguished by their appearance. On a purely cosmetic level, females have breasts, larger hips, smaller shoulders and waist, and have lower muscle tone. Females also have smaller feet and hands, though this often goes unnoticed. Males lack breasts, have larger shoulders and smaller hips, and have higher muscle tone. Children and younger life stages do not have any of these physical differences. In The Sims 2 and later games, each life stage with gender differences has some customization features that are only present for one gender, though Patch 34 for The Sims 4 made almost all of them available to both.

The most prominent difference is that one male Sim and one female Sim are required to create a baby through in-game interactions. Once Sims are past childhood, gender will affect their voices. Gender-specific pronouns will often be used when describing the Sim in a pop-up or on a tag, such as those that appear for some careers, moods, moodlets, and traits.

Overall, however, there are very few differences between the genders. For example, female and male Sims who have the same personality or traits generally have the same reactions to the same situations, though some games may have gameplay options which can affect this. Both genders may pursue the same jobs, though some jobs have slightly different names for males and females. Also, in some jobs that have work outfits, the work outfit for females has a skirt.

In The Sims: House Party and The Sims: Hot Date, there are doors that are used exclusively by one sex. They are usually used for washrooms on community lots, but can be placed on residential lots. These doors were not carried forward into subsequent expansion packs.

Gender does not typically affect social interactions. However, a Sim cannot propose marriage unless the Sim being proposed to is of the opposite gender. A Sim can ask a same-sex friend or lover to move in, but cannot ask an opposite-sex friend to move in. Still, the gender of the two Sims only affects the interaction and animations. No matter which interaction is used, the result of moving a Sim in is exactly the same.

If two Sims of the opposite sex kiss, a dialog may pop up asking to add a baby to the household.

There are some customization features in Create a Sim and change appearance that are only available to one gender. For example, only male Sims have options for facial hair (although facial hair can be enabled for female Sims with the use of mods).

Gender does not typically affect social interactions. For example, during a romantic interaction, the Sim who started the interaction normally assumes the pursuing role, regardless of their gender. When Sims marry, the couple takes the last name of the Sim who proposed marriage. However, whether the relationship is referred to as a marriage or a joined union depends on whether the two Sims are of opposite genders or the same gender. The Sims 2 introduced gender preference scales, which are affected by romantic interactions.

The Try for Baby interaction is available between two adult Sims of the opposite sex. If successful, the female Sim will become pregnant. Adult male Sims can become pregnant through alien abduction.

There are doors that are used exclusively by one sex. They are usually used for washrooms on community lots, but some community lots that sell clothes use them to make single-sex changing rooms. They can be placed on residential lots.

When a female Sim reaches her elder stage, she loses her ability to become pregnant, and thus becomes infertile. Male elder Sims are also unable to become pregnant through alien abduction, although they can still father children.

A statue of a female Sim.

Many gender-related aspects of The Sims 3 are similar to The Sims 2.

In The Sims 3, certain relationship labels are organized by gender. When a baby is born, they will typically be friends with both their parents, however, that will not happen if the father is part of another household or uncontrollable and thus, only friends with the mother. Unlike earlier games, there is a gameplay mechanic for affecting the gender of a baby. Eating some apples during pregnancy increases the chance of a baby boy, while eating watermelons will increase the chance of a baby girl.

World Adventures introduced doors that are used exclusively by one sex. It is likely that these doors were originally present in the base game, but were not enabled. These doors are usually used for washrooms on community lots. Unlike earlier games, they are not available on residential lots.[1]

Unlike previous games, marriage is the same for all Sims, regardless of the genders of the Sims in a couple.

In Generations, children can restrict access to their treehouse, so that children of the opposite gender cannot enter.

In The Sims Medieval, gender differences are similar to those in The Sims 3. However, there is a new element that is not present in any of the other games in the series: when babies are born, they are friends with their mother, but they are only acquaintances with their father, unless the father is made to socialize with his offspring or if he is controllable.

Unlike the real Middle Ages, men and women are free to pursue any profession. However, female Sims will not be given maternity leave if they become pregnant. This can be slightly problematic if they're in a particularly "dangerous" profession such as Knight or Spy, as those roles often have responsibilities that pregnant Sims are unable to perform.

No 'Try for Baby' option exists in The Sims Medieval. Woohoo between two Sims of the opposite gender always carries a chance of pregnancy.

For the first time in the series, mothers are capable of breastfeeding their babies.

Certain relationship labels differ depending on the gender of the Sims in the relationship.

In Get to Work, male Sims gain the ability to become pregnant by alien abduction, in which case they will give birth to an alien baby. If a female alien and a male Sim try for a baby with each other, there is a possibility that both Sims will become pregnant with alien hybrids.

An update to The Sims 4 has removed gender-specific restrictions on hairstyles, clothing and accessories in Create a Sim and during gameplay. Players will be able to change a Sim's gender in-game without the use of cheats or modifications, and specify whether a given Sim is able to become pregnant regardless of the Sim's sex or gender.[2]

While the games contain some toys that have been stereotypically thought of as being for girls or for boys, the toys themselves can be used by either gender. When making free will choices about which toys to play with, Sim toddlers and children do not necessarily adhere to gender stereotypes, and do not appear to consider them. Regardless of whether a toy is stereotypically seen as "girlish" (e.g. a dollhouse) or "boyish" (e.g. a car), boys and girls are equally likely to play with it.

In The Sims 2, a neighborhood will usually have three NPCs of any given type, so gender equality is generally not possible. Still, for many types of NPC, the male/female ratio is always the same. For example, there are more female maids than male ones, more policemen and repairmen than policewomen and repairwomen. Nannies and social workers are always female, and butlers are always male.

In The Sims 3, there appears to be gender equality in NPC jobs: for each type of NPC, there is one male and one female.

Pets have no sexual dimorphism whatsoever, but are still referred to with gendered pronouns. Unlike human Sims, they do not have different customization features. Female pets can get pregnant by trying for puppy/kitten/foal with a male pet.

The Sims series contains a range of playable life states, mostly in the expansion packs for The Sims 2 and The Sims 3. Most of these life states are variants of the basic Sim form, and are gendered in the same way as normal Sims, though some are infertile. However, some do have noticeable differences.

In general, PlantSims, found in The Sims 2: Seasons and The Sims 3: University Life, are gendered in the same way as normal Sims. In each game, however, their reproductive system has features that are unique to PlantSims, though each game handles that differently.

Bigfoot, found in The Sims 2: Bon Voyage, is always male.[3] Whether or not female members of the Bigfoot clan exist in the wild is left to the imaginations of individual players. Bigfoot cannot marry or engage in romantic social interactions, cannot father children, and will not become pregnant if abducted by aliens.

The Sims 2: Open for Business, The Sims 3: Ambitions, and The Sims 3: Into the Future all contain playable robots; Servos, SimBots, and Plumbots, respectively. All of these robotic life states can be either male or female, but each one has its own way of expressing gender.

None of these robotic life states can reproduce.

Servos can engage in romantic interactions, up to and including WooHoo, with both Sims and other Servos.

An inventor who has completed the "Ultimate Invention" opportunity chain and made a SimBot can select the gender of any future SimBots he or she makes. Otherwise, it is not possible to select a SimBot's gender.

SimBots can engage in romantic interactions, up to and including WooHoo, with both Sims and other SimBots.

A Plumbot's gender is part of its Operating System. This option can be set to male or female when creating a Plumbot in Create a Bot. Their bodies and voices are customizable, so physical or audible suggestions of gender are up to the player creating the Plumbot. Plumbots can be redesigned in the Bot Workshop, and this allows a Plumbot's gender OS to be reassigned. Prior to Patch 34 for The Sims 4, this was the only known case in which gender could be intentionally changed without the use of hacks or tools.

Patch 34 for The Sims 4 allows players to change a Sim's gender in-game without the use of cheats or mods, and to specify whether a given Sim is able to become pregnant regardless of the Sim's sex or gender. Prior to this, it was not possible to deliberately use normal in-game mechanics to alter any aspect of a Sim's gender, except for Plumbots in The Sims 3: Into the Future.[4] However, depending on the game, custom content or third-party tools could be used to change a Sim's gender behavior or change the Sim's gender.

Changing a Sim's gender behavior changes things such as their voice, which gendered doors they can use, and any gender-specific animations they may have, but does not actually change the Sim. It does, however, generally change how other Sims treat that Sim. In The Sims, such changes require the use of a hacked object, and are limited to the specific lot they are made on; the Sim's behavior will return to normal as soon as they go to another lot.[5] In The Sims 2, these changes can be made in-game with the Personality Adjustor sectional of the InSimenator. They can also be made by using SimPE to set the "Treat as" radio button in the Overview tab of the Sim's Sim Browser data. Either way, the change will "stick" until it is reversed. In both The Sims and The Sims 2, actually changing a Sim's gender involves editing the Sim's character file with a tool such as SimMetamorphoser[TS] or SimPE[TS2].

Some Sims and NPCs have the appearance of one gender, but are coded in the game and are treated as belonging to the opposite gender, and will have an in-game voice associated with that gender. This ambiguity can be observed in-game with these Sims, and can be confirmed and fixed using SimPE.