A Ghost, a Mummy, a SimBot, a Vampire, an Imaginary Friend, and a Genie eating Salmon

Not to be confused with Life stage.

A life state, a creature, or an occult is a kind of Sim or pet with a special appearance and abilities, mostly inspired by legends or science fiction.

Two alternate life states exist in The Sims and its expansions, though they are not well-defined and do not grant any changes in a Sim's behavior.

When Sims die, they become ghosts. In Livin' Large, pleading with the Grim Reaper may result in him bringing a recently deceased Sim back as a zombie. If Unleashed is installed, these zombies can also be restored by Miss Lucille, who can be found on community lots in Old Town, though she cannot restore their personalities. Also in Livin' Large, Sims using the chemistry set might make a purple potion that can temporarily turn a Sim into a monster.

It could be said that witches come with Makin' Magic, but being magical is not treated as a life state in that expansion. Sims who take up magic still look and act the same, and the term "witch" is not used.

In Makin' Magic, one of the charms that can be made is Beauty or Beast. This charm allows a Sim to temporarily change his or her appearance, and some of the available choices resemble life states from later games, such as werewolves and vampires. While players may choose to treat this as a temporary transformation or an illusion, the in-game effects are the same either way. The Sim who has been "charmed" is still a normal Sim; the charm only affects the Sim's appearance and does not affect the way the Sim behaves or the way other Sims react to him/her, and the Sim gains no extra abilities or interactions.

Life states in The Sims 2 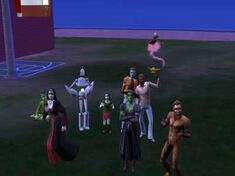 All of the life states from The Sims 2 up to Apartment Life except for normal Sims, ghosts, and mannequins.

Each life state offers new opportunities for the Sim, making certain aspects of play easier to handle and others harder.

Life states in The Sims 3 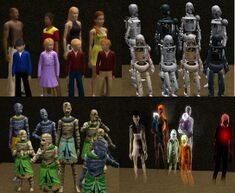 Families of The Sims 3 life states (except for normal Sims) up to Late Night.

The Sims 3 and its expansion packs, as of 22 October 2013 (2013 -10-22)[update], features 15 life states. Official game text recognizes certain kinds of life state as "occult," and occult Sims cannot be given makeovers by stylists. Prior to The Sims 3: Supernatural, Ghost was not considered an occult status according to the game files. With Supernatural, players are able to create some occults with a Supernatural Type selector in Create a Sim. These life states include normal Sims, ghosts, vampires, genies, werewolves, witches, and fairies.

Several states in Supernatural (i.e. Toad Sims, Tragic Clowns, and Zombies) are not considered to be occult. They are merely temporary[5] states and can only affect normal Sims. These states can be cured by removing the moodlet with the Moodlet Manager or drinking the Cure Elixir.

Warning
Sims cannot be turned into occults properly through "Edit in CAS" with testingcheatsenabled cheat, even though the option is available for the players to do so. This is because the occult option is not intended to be used this way.

Retrieved from "https://www.thesimswiki.com/w/index.php?title=Life_state&oldid=964248"
Categories:
Hidden categories:
Cookies help us deliver our services. By using our services, you agree to our use of cookies.