Sunny the Tragic Clown is a strange and mystical character first introduced in The Sims: Livin' Large as a potential NPC visitor, alongside the Grim Reaper, Genie, Servo and Santa Claus. The Tragic Clown will arrive to cheer up Sims who own a painting of him when they are depressed. Unfortunately, the clown's attempts to raise moods are unsuccessful, often having the opposite effect, and he is difficult to remove from the lot. The Tragic Clown is seemingly considered a menace to SimCity, as a service known as Clown Catchers exists who can be hired to forcibly remove him from the lot.

The Tragic Clown reappears in The Sims 3 as a deceased Sim buried in the Sunset Valley graveyard, and in The Sims 4 as part of patch 32.

There is a chance that the Tragic Clown will be selected if a Sim wishes for a new love interest from the Genie. However, he will be rejected immediately.[confirmation needed]

According to the Prima Official Strategy Guide: "The Tragic Clown used to have an unmentionably close affiliation with Burger Clown Partnerships Incorporated, but that relationship was ended abruptly. The Tragic Clown has never fully recovered..."

Although Sunset Valley is a prequel to towns in The Sims, the Tragic Clown is already deceased and buried in the Pleasant Rest Graveyard. His tombstone (which can be found along the east side of the Pleasant Rest Graveyard) indicates that he drowned. For that reason, the color of his ghost is blue. His ghost can usually be spotted around the time when most other ghosts are already out. The fact that he drowned is very odd, as he has the Hydrophobic trait, and Sims with that trait don't typically die from drowning. This may imply an unusual cause of death, such as dying from crying, being drowned by others, or developing this trait after his death, which is not possible through normal gameplay.

The appearance of the Tragic Clown in The Sims 3 is quite different from his appearance in The Sims. He looks more realistic, friendly, and colorful. His clothing consists of a light green shirt with a gray waistcoat and colorful pants. He also wears a black and white hat. He still has his signature clown makeup, but without the white base. The color of his hair is no longer red, but blonde. His eyes are dark blue. Although it seems that he has short hair, he actually has long hair, which is revealed when he wears sleepwear, athletic and swimwear clothes.

The Tragic Clown's traits are Easily Impressed, Bookworm, Neat, Clumsy and Hydrophobic. Strangely, he doesn't have a favorite color, but he likes classical music and key lime pie. His lifetime wish is to become a "World-Renowned Surgeon." Judging by his traits, his personality is the exact opposite of a typical clown.

If Tragic Clown is resurrected with the Oh my Ghost! Opportunity, he will become a playable Ghost, and can have his clothing changed with a dresser; he will then appear on Create-A-Sim (only with the option to change clothing), while he is on this, he will be a normal Sim. With the World Adventures patch, his eyes will not be shown, and his hair will be a ghostly white.

Another notable feature is his status as a ghost, as Sunset Valley is a prequel to towns in The Sims. This may imply that he was already dead in the first game, which could explain his ability to come out of a painting. It is also possible that the Clown in Livin' Large is a relative (or son) of the original Tragic Clown in The Sims 3, or that he was resurrected with Ambrosia.

The "Dawn of Sims" set on The Sims 3 Store includes the Ironic Clown by Angelo, which appears to be a portrait of the Tragic Clown.

Resurrection tip
This Sim can be brought back to life with ambrosia or with the Oh My Ghost! opportunity. For more information, read Game guide:Bringing Sims back to life.

The male and female Tragic Clown outfits in The Sims 4.

The Tragic Clown reappears in The Sims 4 in the form of an eponymous painting, marking the 16th anniversary of the series. Sims who view the painting will receive the "Tragic Clown is Tragic" moodlet and become sad. 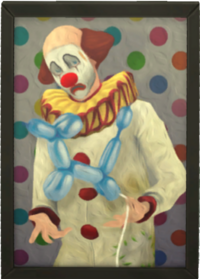 The Tragic Clown painting in The Sims 4.

The Tragic Clown outfit is special in that when worn, it effectively turns the sim wearing it into a Tragic Clown by granting them the permanent "Tears of a Clown" moodlet, which gives a +3 sadness boost. As a result, the default emotion for a Sim wearing this outfit is very sad. Any Sim who is near another Sim wearing this outfit will receive the "Such Tragedy" moodlet, making them sad as well. However, two Tragic Clown Sims who are near each other will both receive the "Misery Loves Company" moodlet, giving them a +1 happy boost. This demonstrates that with the right combination of environmental factors and moodlets, Tragic Clown Sims can potentially overcome their sadness and (at least temporarily) occupy other emotional states.[2]

Tragic Clown Sims have a few special abilities, most notably the "Juggle" self-interaction and the "Tragically Try to Cheer Up" social interaction. Attempting to juggle will always cause the Tragic Clown to drop their juggling balls, worsening their mood and the mood of other Sims around them. Similarly, tragically trying to cheer up another Sim is the equivalent of a joke interaction that is guaranteed to fail. This will make the recipient of the interaction even more sad and cause a negative relationship boost between the Sim and the Tragic Clown performing the interaction.[3]

Retrieved from "https://www.thesimswiki.com/w/index.php?title=Tragic_Clown&oldid=966995"
Categories:
Hidden categories:
Cookies help us deliver our services. By using our services, you agree to our use of cookies.