A graveyard or cemetery is a home feature found throughout The Sims series, a type of community lot in The Sims 2 and The Sims 3, and a world feature in The Sims 4: Cats & Dogs and The Sims 4: Snowy Escape. They are where the headstones of deceased Sims are placed after they die. Ghosts frequently haunt cemeteries in the series.

Both of the Goth family lots in the base game and Unleashed have cemeteries, though only the original one has ghosts. The Gothic Quarter in Old Town, and Vernon's Vault and A Spooktacular Spot in Magic Town all contain gravestones, but again they lack ghosts.

When lots with gravestones are exchanged or moved to different neighborhoods, they will no longer have a ghost associated with them as the data of the Sims who had died and were linked to the gravestones is not transferred with the house. This can cause some problems, including gravestones summoning random NPCs.

In The Sims Bustin' Out, cemeteries are only found in one pre existing lot, Goth Manor. Although the names of the deceased Sims are unknown, they haunt the house every night until the protagonist exorcises them.

Makeshift cemeteries can be placed on any lot when a Sim dies by simply placing their headstone outside.

Cemeteries have been constructable on playable Sims' lots since The Sims. The Goth family is famous for the many cemeteries found outside their homes in every game. The Specter family is also famous for having a massive graveyard in their garden. Although it's not as large as the Specter Graveyard, the Capp family has a graveyard as well, and is the only one to have both tombstones and urns—two urns are placed in the Capps' living room.

The Sims 2: Nightlife added the ability to move graves from one lot to another, which allows cemeteries to be on community lots. The Downtown sub-neighborhood shipped with Nightlife includes the Gothier Green Lawns cemetery, which is the first cemetery found on a community lot. Gothier Green Lawns features some members of the Tricou family and is right next to their home.

In Belladonna Cove, there is a community lot named Gamesend Grounds, which is a cemetery according to its description. However, a glitch prevents graves from appearing.[1]

As a lot assignment, graveyards provide the Creepy Graveyard moodlet to Sims who don't possess the Brave or Evil traits:

Encourages NPCs to learn
Nothing.

In The Sims 3, a Sim can get a part-time job in a cemetery as a Mausoleum Clerk.

Fish in a pond located in the cemetery will turn into deathfish and vampire fish at midnight. At around midnight, mist will appear around all of the graves, and the ghosts will come out. Sims with Level 7 gardening skill can plant seeds picked from the Death Flower Bush. These seeds are of perfect quality.

There is also a local cemetery in every destination of The Sims 3: World Adventures.

Setting off fireworks in a graveyard will awaken some ghosts and the Sim who set them off will get paid for entertaining the cemetery's residents.

If Pets is installed, dogs and cats may visit the graveyard.

In the center of the Pleasant Rest Graveyard, there is a desolate and ominous-looking Mausoleum of the Specter family (who may be related in some way to the Specter Family of Strangetown). Any Sim brave enough to venture into it can explore the mausoleum to lay hand on unknown treasures which are rumored to be hidden deep in the abyssal bottom of it. An exploration takes anywhere from three to five hours. Its proceeding and outcome are random, but it often results in the Sim becoming singed.

Also, one can see a large Statue of the Grim Reaper. Finally, there is a single quality "bad" tomato seed.

There are 23 named Sims buried here: 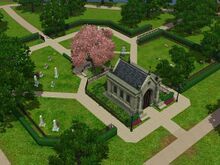 Riverview's cemetery is far less gothic than Sunset Valley's Pleasant Rest Graveyard, and has no statue of the Grim Reaper. At night, ghosts will appear around the graveyard and move all over the island, scaring any Sims who are out late. It is also the largest cemetery found in any The Sims 3 neighbourhood, with some notable figures from Riverview families.

There are 30 named Sims buried here:

Land of the Ancestors[edit | edit source]

Land of the Ancestors

Land of the Ancestors cemetery in Shang Simla.

Land of the Ancestors is Shang Simla's cemetery, introduced in The Sims 3: World Adventures. It is Asian-themed, with pagoda roofing and an elevated mausoleum. Urns are displayed in shrines rather than on the ground as tombstones. 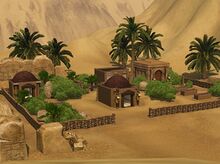 Desert's End is Al Simhara's cemetery, introduced in The Sims 3: World Adventures. It is Egyptian-themed, and has a large basement underneath it containing a sarcophagus and incense burner. Urns are displayed both on the ground as tombstones, as well as in specially built shrines. Its address is 60 East Riverview Place. 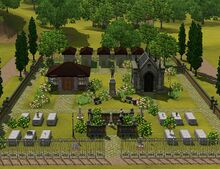 Eastern Hills Cemetery is Champs Les Sims' cemetery, introduced in The Sims 3: World Adventures. It is French-themed and has a number of locked tomb rooms. It is the brightest cemetery with lots of flower beds. The mausoleum on this lot is the same as in Riverview and Sunset Valley. It plays a role in several adventures in Champs Les Sims. 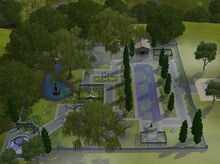 Ivy Hill Graveyard is the cemetery of Twinbrook. It is always misty, with a very marshy environment typical of Twinbrook. There are Doric columns all over the cemetery. The mausoleum is in a corner of the lot, and it is decorated with Greek-styled columns. A statue of Grim Reaper rises from a pond at the border of the lot. Ivy Hill has many gravestones, but unlike previous cemeteries in The Sims 3 series, most of these are only debug objects titled "Remains" with no deceased Sims attached. It also contains a ghost whom died from the Mummy's Curse, which may be somewhat confusing to players without World Adventures installed.

Like in Isla Paradiso, there are two graveyards in Barnacle Bay.

Barnacle Boneyard is the main graveyard in Barnacle Bay.

Dead Men Tell No Tales Cemetery is a graveyard in Barnacle Bay.

Bridgeport Eternal Rest Cemetery is the graveyard from Bridgeport, introduced in The Sims 3: Late Night. It is quite big, and is situated in the hills. There are two mausoleums: the rabbit hole, located near the pond, and the non-rabbit hole one, on the top-right corner, which is the entrance of an underground vampire lair, with an altar and a bar. There is also a big pool of water in the center, and a gazebo-like building on the top-left corner of the cemetery.

The Shady Pine Historical Cemetery is located in the wooden part of Hidden Springs. It is very tiny and very muddy. There are two statues of the Grim Reaper at each side of the cemetery, watching each other. There is also a pond behind the mausoleum.

Newton Cemetery is the graveyard in Appaloosa Plains.

There is one named Sim buried here:

Moon's Shadow Graveyard is the graveyard in Lunar Lakes.

There are five Sims buried in this graveyard:

Lidview Cemetery is the graveyard in Starlight Shores.

Sunwest Graveyard is the graveyard in Lucky Palms.

Final Sunset Graveyard is the default cemetery in Sunlit Tides It is found on a mountain and is rather isolated. It bears some similarities with Barnacle Boneyard.

Hallowed Grounds Cemetery is the graveyard in Moonlight Falls.

Restful Mausoleum is the graveyard in Monte Vista.

The Morningside Morgue and Cemetery is the default graveyard in Aurora Skies. It is really plain: a lonesome mausoleum rises at the center of the lot. Four walkways go from each side of the lot to the mausoleum and the rest is coated gravestones, all of which are flat.

City Cairn Memorial Lot is the graveyard in Dragon Valley.

Like in Barnacle Bay, there are two graveyards in Isla Paradiso.

Oceanview Cemetery is the main graveyard in Isla Paradiso.

Cementerio Antiguo is a graveyard in Isla Paradiso.

There are 2 named Sims buried here:

Pleasant Meadows Cemetery is the graveyard in Oasis Landing.

Resting Meadows Cemetery is the graveyard in Roaring Heights.

There are two functional graveyards in The Sims 4, included in The Sims 4: Cats & Dogs and The Sims 4: Snowy Escape. The one in Cats & Dogs spawns ghost pets that can be adopted by Sims, and the one in Snowy Escape is home to forest spirits that Sims may encounter while hiking. The Sims 4: Vampires features decorative graveyards in Forgotten Hollow that cannot be interacted with in any way. The Sims 4: Realm of Magic adds a small, decorative Spellcasters graveyard located in The Magic Realm on the side of the main island, which cannot be reached even with teleportation.

Additionally, while there is no official "Graveyard" Lot assignment available through normal gameplay, it is relatively easy to create graveyards on Community Lots, since Gravestones can be transported and placed through a playable Sim's inventory.

There is one named pet buried here:

Other deceased pets' names can be read on various headstones, but they are not present in the game:

Senbamachi Graveyard is a graveyard in the Senbamachi neighborhood of Mt. Komorebi.

Sims who go hiking in Senbamachi may come across forest spirits (like kodama) while visiting the town's graveyard. Sims can also mourn at some of the headstones, take photos and place gift offerings, but there does not seem to be a way to view the names of the Sims who are buried there.[2]

Retrieved from "https://www.thesimswiki.com/w/index.php?title=Graveyard&oldid=949294"
Categories:
Hidden categories:
Cookies help us deliver our services. By using our services, you agree to our use of cookies.