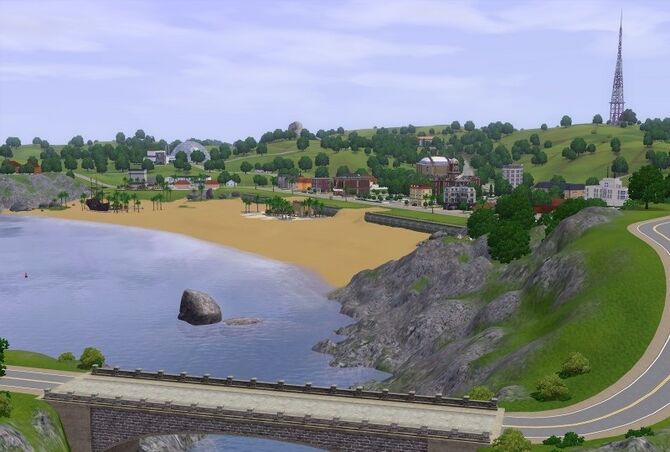 An island nestled in the Simuyan Sea, Barnacle Bay is a vibrant vacation getaway with stunning beaches, campgrounds, parks, and a curiously modern downtown. First settled by pirates, fisherman, and artists - the world's inhabitants now enjoy relaxing at Smuggler's Beach and letting loose at The Wanderer's Watering Hole. Will Your trip be a vacation or a staycation?

Barnacle Bay is by far the city with the deepest connection to the sea and to pirates. The city features four default beaches. The new clothing and personalities introduced are also outdoor-like, and many Sims possess the Angler trait.

The town is set after The Sims 2, as the Caliente sisters have moved from Pleasantview to Barnacle Bay, which is confirmed by Dina's biography: "The Sims 2 Sisters are back! Can Dina break hearts in Barnacle Bay like she did in Pleasantview? She wants to find out."

Fear me…ye…scurvy…dog… Alright, so I’m not a pirate. But my great, great, grandparents were. They burned, pillaged, looted and merrily stole treasure. It was a pirate’s life for them! They settled here in Barnacle Bay way back in the day, when the island was more about escaping the authorities and less about escaping the drudgery of everyday life. Even though it’s not really dangerous anymore, Barnacle Bay is an amazing place where people of all types come and find a place in the world where they can nestle.

With beautiful beaches, relaxing campgrounds, plentiful parks and a modern downtown area there’s something for everyone here! I mean, have you seen that restaurant? It’s a boat! A boat that crashed! How crazy is that? Haha! So come along for a visit; you just might find yourself wanting to stay. 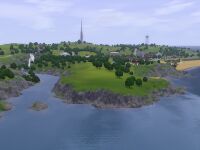 §2,500
Difficulty: 2
Patty Abe, Serena Abe
These two sisters are exact opposites, but in some ways balance each other out. Hopefully they can learn to deal with their differences in a civilized manner.

§65,800
Difficulty: 5
Finn Annan, Flora Annan, Fern Annan, Philip Annan, Fawn Annan, Daisy Annan
The Annan house can be a chaotic place as the family is large. However, there is a lot of love in the house, despite the drama.

§3,250
Difficulty: 2
Jake Coastal, Josephine Coastal
The Coastals adore Barnacle Bay, and their love of the town's history and the island's eco-system is evident in their home.

§5,525
Difficulty: 1
Odessa Cross
Even though the house is tiny, it is vibrant and full of color, just like Odessa herself.

§50,000
Difficulty: 2
Lewis-Charlie Darwin, Preethi Darwin
The Darwins are a scientifically inclined couple who are passionate about fish and fishing. Lewis and Preethi have a garden and a small pond they love spending time on.

§15,000
Difficulty: 1
Fiona Fleet
Fiona keeps a well-appointed house with a modern style. She used to be a very successful business woman in the big city, but she retired early and is living a modest life training as an amateur triathlete.

§150,000
Difficulty: 3
Eleanor Goldbeard, Anne Goldbeard, Tobias Goldbeard, Coral Goldbeard, Kidd Goldbeard
Not only are The Goldbeards the wealthiest family for nautical miles, they are also the most socially and politically connected. Most people overlook how they built their family wealth.

§22,000
Difficulty: 4
Shorty-John Inkbeard, Victoria Inkbeard, Morgan Inkbeard, Aeisha Inkbeard, Pearl Inkbeard, Bart Inkbeard
The Inkbeard family name seems to be a reference to an ancestral epic sea victory over a Giant Squid. There are rumors of fabulous wealth plundered and then lost, which makes this family suspicious of everyone.

§76,488
Difficulty: 1
Dude La Mer
Dude LaMer is a single surfer bum who is somewhat directionless. He has a lot of friends, but he can't get a second date because girls get tired of talking about the beach.

§55,000
Difficulty: 3
Gil Lai, Laurel Lai, Jonah Lai
The Lai family has been fishing for as far back as anyone can imagine, and some of their ancestors even have portraits up in City Hall. Of course why they are brandishing cutlasses no historian has quite figured out.

§4,200
Difficulty: 3
Buzz Malifa, Petunia Malifa, Marcus Malifa
Filled with all of Buzz's knick knacks and clutter, this household is a clash of tastes and styles. The personalities in this house also tend to collide, but this family has learned to make it work.

§70,712
Difficulty: 1
Willy McKellar
Willy the ex-lightkeeper has a house in the most remote part of Barnacle Bay. He is rarely seen in town.

§1,626
Difficulty: 1
Jasmine Noon
Filled with plants, flower, light, and art Jasmine's life is dedicated to all things beautiful. Jasmine is far from home but she was drawn to the mist, the coastline, and the mystery of Barnacle Bay.

§28,032
Difficulty: 2
Juan Jr Inkbeard, Ahmed Barbarossa, Lee-Roy Johnkins
Three rowdy singles enjoy being on their own for the first time. They love hosting parties and being best friends, even when the occasional drama ensues.

§8,500
Difficulty: 1
Moe Pesce
Moe must prove himself to be lord and master of the ocean and catch the biggest and baddest fish out there. He has no time for decorating - he has fish to catch!

§3,500
Difficulty: 1
Dave Piece
This is a classic bachelor pad. To upgrade this house one would have to torch the furniture first.

§12,000
Difficulty: 1
Thomas Quill
Thomas Quill is the unofficial town historian and also the volunteer librarian. He is incredibly knowledgeable about all things nautical and his house could be considered a mini-museum in its own right.

§3,000
Difficulty: 2
Richie Radan, Rahul Patel
These two bachelors are vacationing in Barnacle Bay, taking a break from the stress of daily life. Is there a chance this could be a permanent stay?

§6,200
Difficulty: 2
Roger Rao, Mia Rao
The Rao's are in the beginning stages of starting a family, and this modest house is the perfect size for mom, dad, and baby. Hopefully it isn't twins!

§3,000
Difficulty: 1
Rose Rome
Rose is somewhat of a gypsy in how she dresses and acts. Her small cottage is crammed with all kinds of odd knick knacks, some of which she claims she "found" on the beach.

§32,000
Difficulty: 1
Agnes Seabottom
This house seems barely lived in and was built more for privacy and secrecy than for comfort or style. One could even call it a mini-fortress.

§4,000
Difficulty: 1
Jeff Smith
This prim and proper household is the a prime example of middle class perfection. However there is a mirror in nearly every room so that Jeff can practice his charisma skills.

§3,300
Difficulty: 2
Felix Soto, Mary Soto
This elderly couple has been in Barnacle Bay for decades, and they have the souvenirs to prove it. This just might be the cutest couple on the island.

§2,600
Difficulty: 1
Alec Trebo
The Trebo house is almost a museum in its own right and is a veritable showcase for all of Alec's past exploits and treasure collecting.

§7,425
Difficulty: 1
Juliet Verona
This is one luxe modern household for such a small town. Juliet has made sure each piece of decor (and there is a lot of it) is in the perfect spot.

§2,400
Difficulty: 2
Nina Caliente, Dina Caliente, Luisa Libros
The driving personalities in this household are the Caliente sisters who are always fighting, flirting, and generally out to have a raucous party. They are showing Luisa the ways in misbehaving.

These Sims are pre-made, but homeless when Barnacle Bay is first loaded. 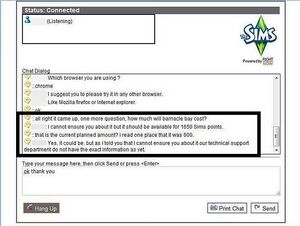 Retrieved from "https://www.thesimswiki.com/w/index.php?title=Barnacle_Bay&oldid=966251"
Categories:
Hidden category:
Cookies help us deliver our services. By using our services, you agree to our use of cookies.