From The Sims Wiki, a collaborative database for The Sims series
(Redirected from Babysitter)
Jump to navigation Jump to search 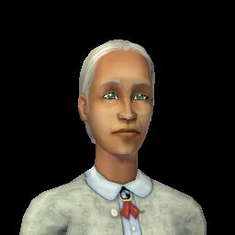 Nannies or babysitters are service NPCs that care for Sims' children, toddlers, and babies while they are away. Older Sims cannot leave their home lot if doing so would leave a younger Sim home alone,[TS2][TS3] unless they send them to daycare.[TS4] The nanny or babysitter will take care of a Sim's children (bathing, feeding, changing, and interacting with babies, toddlers, and children), as well as tidy up the house by doing things like emptying the potty and making the beds. They can be fired or dismissed at any time, and a new one can be hired to replace them. 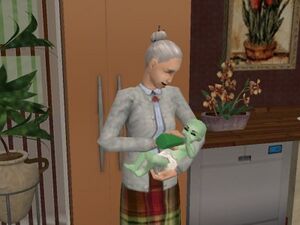 A nanny feeds an alien baby.

In The Sims 2, nannies are always female elders (except in The Sims Pet Stories, since elders do not exist in that game), and wear a conservative white blouse, gray button-up sweater, long plaid skirt, and bowling shoes. There are two nanny outfits; one has a green plaid skirt and green collar ribbon, while the other has a red plaid skirt and red collar ribbon. It appears that one outfit is set as the special NPC outfit. The other outfit may be used as the Everyday outfit, but this does not appear to happen for all nannies.

Nannies can have any hairstyle, skin color, and personality. A nanny can be interacted with, and therefore married, asked to move in, or killed off. Players with University should note that a nanny who has idle time may be drawn to a Cowplant.

A nanny can be called up to come over once or to track the schedule of an adult to see when the child will be left alone. However, it appears that the nanny only tracks the schedule of the Sim who made the call. She may come if that Sim is at work, even if another household member has the day off. Also, the nanny will not track changes in the Sim's schedule that result from a promotion or demotion, so if the Sim's schedule changes, the nanny will need to be called again so she can track the new schedule. Generally, once a Sim has re-appeared, the nanny will leave, but sometimes they need a bit of persuasion.

In The Sims 2: Bon Voyage, whenever a family is on a vacation and there's at least one child, toddler, or baby left in the house, a Sim needs to ask a teen or older household member to watch over them. If no one is able to babysit the kids, the Sims must hire a nanny before they finish planning the vacation, or they won't be able to go. The nanny will come just before the vacation van arrives.

In The Sims 2: Apartment Life, a neighbor in an apartment building can be asked to watch kids. If this is done, there is no need to hire a nanny. This can be done at any time, as long as the neighbor is not about to walk to work. A neighbor who is watching the kids will continue to watch them even during their work hours, and can be dismissed at any time. 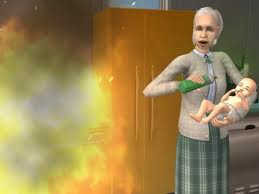 Nanny caught off guard by fire

Some nannies are more on-task than others, and careless nannies are apt to make meals and possibly start a fire, wet themselves, and neglect the children. There's also nothing to stop them stealing from the Money tree except locking it in a secure room that only a certain Sim can enter.

Feats of child cruelty include repeatedly picking a baby up and putting it back in its crib or on the floor, waking up sleeping babies with music or just to play with them (this is not unique to nannies). A nanny may put a toddler in and out of a high chair and stare blankly at it. A nanny may even make a TV dinner for a toddler, even though a toddler can't eat it, then walk off to pick the toddler up and put them down again. Sometimes, a nanny can do something so silly, that the child/children can be taken away. 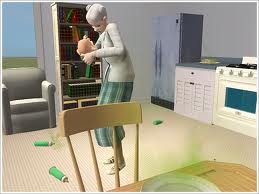 Nannies can be also quite glitchy in The Sims 2. They can become stuck on lots, multiply or simply refuse to leave even if the van shows up. In this case, the simplest solution is to remove them using the moveobjects cheat.

There have been reports of nannies in The Sims 2 walking off with babies,[1] but it has also been reported that this is equivalent to deleting the baby with moveobjects, and that the baby will appear by the mailbox when the lot is reloaded.

In The Sims 3, the babysitter is a random teen from the town who will come to take care of the baby/toddler when a Sim calls for the service. Babysitters can be male or female. They are just normal Sims that come to help for a fee, so they can be interacted with in the same way other Sims can. If a certain babysitter keeps showing up for a few days and has a lot of interaction with the toddler, their friendship will continue when the toddler grows into childhood. The two pre-made babysitters in Sunset Valley are Candy Ashleydale and Davy Linnell. 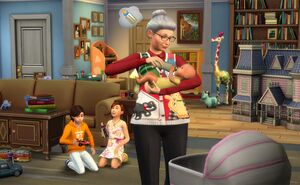 In The Sims 4, nannies or babysitters were not initially present in the base game, but were added in an update released on July 14, 2016.[2] Nannies are random young adult, adult, or elder townies that will come take care of the baby/toddler/child when a Sim calls for the service, and can be male or female. Prior to this update, babies would automatically be sent to daycare when all other Sims had left the lot. Children can be left alone with babies, but cannot effectively meet a baby's needs. Now, when the last Sim leaves the lot the player will get a popup giving them the option to either hire a babysitter or send the baby/toddler to daycare, which is free but doesn't allow for toddler skill building. When nannies were first released in a patch, there was a glitch that would cause Sims introduced to the nanny to stop aging. This has been fixed in a later patch.

Nannies will cook meals and autonomously help children with homework in addition to basic baby/toddler care.

It has been reported that the kidnapping glitch has returned, though this is unconfirmed.

Retrieved from "https://www.thesimswiki.com/w/index.php?title=Nanny&oldid=970287"
Categories:
Cookies help us deliver our services. By using our services, you agree to our use of cookies.