From The Sims Wiki, a collaborative database for The Sims series
Jump to navigation Jump to search
Spellcaster
Spellcaster
A life state · Featured in:

Spellcaster
File:TS4ROM Promo 6.jpg
A spellcaster with her wand.

For spellcasters in previous games in the series, see Witch.

Spellcasters are a life state introduced in The Sims 4: Realm of Magic.[1] Spellcasters are denizens of Glimmerbrook and The Magic Realm. Spellcasters can cast spells as well as concoct potions to cause a variety of magical effects.

File:TS4 CAS Spellcaster Button.png
Spellcasters can be made directly in Create a Sim like other occult types, but they are the first to only have one form. Spellcasters also appear to have access to some customisation options from other life states such as pointed ears, vampire facial customisation and vampire/mermaid teeth. It is unknown if this is intended.

Non-playable Sims will become spellcasters if they haven't been played once by the player, or been met by a controllable Sim prior their travel to Magic Realm.[2]

Children born to spellcasters develop a magical bloodline trait, which will benefit them when they acquire their magical powers aging into teens.[3] If a human child is born being a spellcaster, the human Sim's parents will also inherit the trait, however, they won't be able to benefit from it until they've turned into a spellcaster through the Rite of Ascension. Sims born with any of the bloodline traits who aren't spellcasters can skip the quest for the sages and instantly ask for the rite. 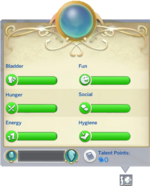 Spellcasters have normal needs just like any other human Sim, except from their needs, they can access their perks menu and spell book.

Above the spellcaster's needs, it will display a globe of magical charge that indicates how much charge a spellcaster has. Spellcaster charge fills up every time a spellcaster uses magic and only goes down overtime or when the spellcaster manaully discharges their magical energy, which can only be done once every few hours. 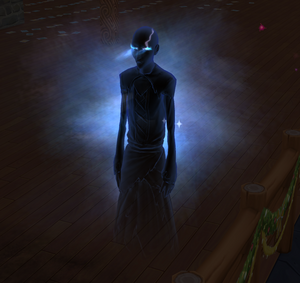 If a spellcaster fails a feat of magic they can be cursed which will negatively affect them and their spells, similar in a different way with the fame quirks that celebrities can receive in The Sims 4: Get Famous. Curses appear within the spellcaster's needs panel as well as each spellcaster can acquire up to 3/10 curses.[4] Curses can easily be dispelled by drinking the Potion of Curse Cleansing or with the Decursify spell. Curses can also be outright prevented with the Hexproof perk, however, it will not cleanse any existing curses on the Sim prior to the purchase.

The curses a spellcaster can receive are:

Spellcasters can acquire a variety of magical items such as spell books, magic brooms, and wands. Wands are optional as players can choose to have spellcasters do magic simply with their hands instead. Every spellcaster receives an object known as the "Glimmerstone", which can be used to teleport to the Magic Realm without having to go through the portal in Glimmerbrook.

Spellcasters can learn 24 spells across the three schools of magic, ranging from teleportation, to transforming Sims into objects, starting fires, summoning ghosts, and resurrecting deceased Sims. Spells can backfire, with the likelihood increasing if the spellcaster's level is lower than what is required for the spell.

Spellcasters can level up in ranks through experience and training in magic. Spellcasters have six ranks:

Spellcasters can earn experience naturally by:

There are a total of 24 perks from which spellcasters can choose. There are three columns of perks that must be bought in rows, but perks outside the columns don't have the restriction and can be bought as long as the spellcaster is of the appropriate level.

Spellcasters have a variety of special interactions marked by a book symbol and usually under the "Magic" interaction within the pie menu.

Interactions with other spellcasters[edit | edit source]

Spellcasters can enthuse about magic as well as discuss magical topics to one another. They can share potions, cast spells on one another, and even duel together. Spellcasters who are of a higher level can offer magical training to lower-level spellcasters.

Spellcasters can duel each other for many options:

Spellcasters are most commonly found within the Magic Realm, which is a location outside the normal dimension other worlds exist within. Plenty of spellcasters go there to practice their magic, talk with other spellcasters, collect magical artifacts as well as ingredients, or even duel at the dueling grounds.

If a spellcaster wishes to no longer have magic or suffer from magical curses, they can ask a Sage to perform the "Rite of Dissolution" which will revoke a spellcaster of their magic.

You can always commit the Rite of Ascension again and regain all your powers as they were with the traits reset.

Retrieved from "https://www.thesimswiki.com/w/index.php?title=Spellcaster&oldid=964003"
Categories:
Hidden categories:
Cookies help us deliver our services. By using our services, you agree to our use of cookies.