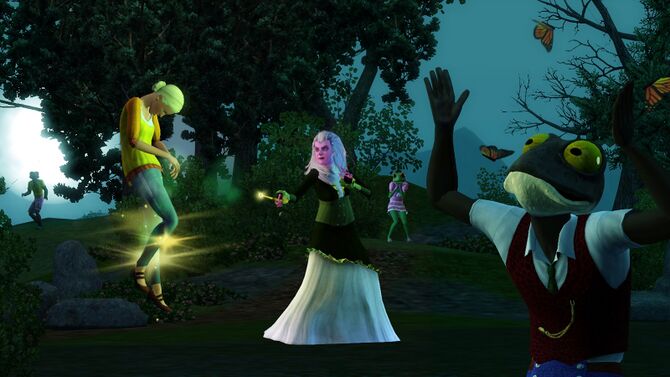 A magic attack in The Sims Medieval.

For the secret sub-neighborhood in The Sims 2, see Magic (neighborhood).

Magic and the paranormal is evident in The Sims series. It can be seen in almost all games in some form, but most especially in The Sims: Makin' Magic, The Sims 2: Apartment Life, The Sims Medieval, The Sims 3: Supernatural and The Sims 4: Realm of Magic.

In The Sims: Livin' Large, the voodoo doll can be used to torment other Sims.

Most spells and charms in Makin' Magic are meant to have positive or neutral results; all can backfire.

Magic can fail for many reasons:

Sims who have less than eight playful points can meditate to gain the power of teleportation.

In University, Sims who have gone through a college education can work in the Paranormal career. Its associated career reward is the Resurrect-O-Nomitron, which allows them to resurrect deceased Sims that they know of.

In Bon Voyage, Sims visiting Twikkii Island can obtain a voodoo doll, which can be used for the benefit (or detriment) of other Sims.

True magic in the same fashion as The Sims: Makin' Magic was reintroduced in Apartment Life. Magic can have positive or negative results. Spells are divided into Good, Neutral, and Evil. Magic reagents are needed to cast spells, but it is enough for a witch/warlock to have them in inventory when casting.

Witches/warlocks can also craft special items, such as lamps of different category variations and thrones. These come in "good" and "evil" variants, based on the witch/warlock's current alignment. 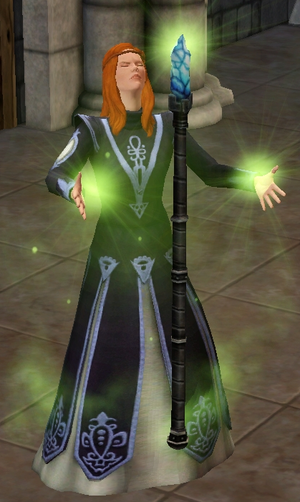 A Sim using a magical staff.

Mummies can curse a Sim if they win a fight against them. This can be dangerous to the Sim if the curse is not treated in time.

True magic returns in Supernatural. Witches are able to use their powers to do things that normal mortal Sims cannot. Fairy Sims can also use magic to perform Fairy Tricks and other stuff.

Even without Supernatural, any Sim, regardless of life state, can use magic with Lady Ravendancer Goth's Book o' Spells. The Book o' Spells can be purchased from The Sims 3 Store for 500 Simpoints.

Another store item, the Malleable Mimic Voodoo Doll, can be bound to specific Sims and used for their benefit or detriment according to the player's wishes.

Prior to Realm of Magic, magic in The Sims 4 was limited. Sims can use voodoo dolls if they have a level 4 or higher mischief skill.

A wishing well is included in The Sims 4: Romantic Garden Stuff, which can magically grant Sims' wishes. In Jungle Adventure, Sims can be cursed in multiple ways and can transform into a skeleton. In The Sims 4: Paranormal Stuff, Sims can learn the medium skill to communicate and interact with ghosts as well as specters better, this can be done at a seance table or on the floor. 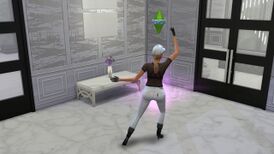 A sim using magic in The Sims 4: Realm of Magic

True magic returns in Realm of Magic. Sims can become spellcasters (a new occult type) and can learn various spells, curses and potions. They are also able to bind familiars to themselves, including dogs and cats. Magic is split into four distinct styles: Practical, Mischief, Untamed and Alchemy.

Magic can be used in a variety of ways. Magic can be used to boost a Sim's motives (or decrease them). If Get Famous is installed, spellcasters might affect their reputation if they use magic in public.

Retrieved from "https://www.thesimswiki.com/w/index.php?title=Magic&oldid=963290"
Categories:
Hidden categories:
Cookies help us deliver our services. By using our services, you agree to our use of cookies.