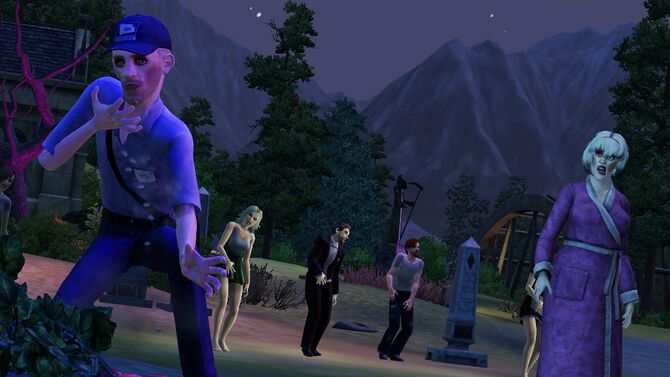 Zombie
A life state · Featured in: 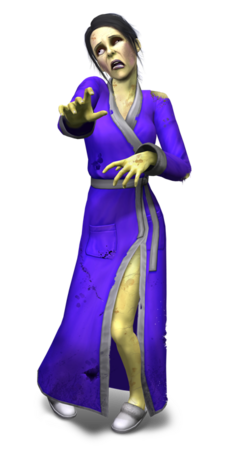 A zombified Sim in The Sims 3: Supernatural.

A Zombie is a life state that Sims and pets can be transformed into. This creature first became available in The Sims: Livin' Large. In The Sims 2, it appears in the University, FreeTime, and Apartment Life expansion packs. It returns, with some differences, in The Sims 3: Supernatural.

A Sim that has become a Zombie in The Sims: Livin' Large.

In The Sims: Livin' Large, if a Sim or pet dies a loved one can plead to the Grim Reaper and engage in a rock-paper-scissors game for their life. If the Sim loses, but the Grim Reaper is in a good mood, he'll bring back the dead Sim or pet as a zombie. Zombies retain all of their skill points, but lose all their personality points and gain a green tint to their skin. Other than that, zombies function like normal Sims or pets in every way. Children can also become zombies.

As zombies lack any personality points, drinking a yellow potion from the chemistry set will give them 10 points in each trait. With Unleashed, Miss Lucille can restore a zombie back to their normal state for §200, but this process will not restore the Sim or Pet's personality. 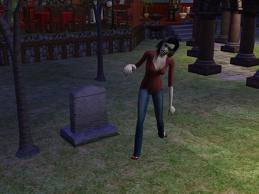 Zombiism is introduced with The Sims 2: University, and also included with The Sims 2: FreeTime and The Sims 2: Apartment Life. In University, deceased Sims can be resurrected with the Paranormal career reward, the Resurrect-O-Nomitron. If a Sim bids between §998 and §4127 when using the Resurrect-O-Nomitron, the resurrection will fail and the Sim will be revived as a zombie. In FreeTime, a deceased Sim can become a zombie if another Sim makes a genie wish to resurrect them and the wish fails. In Apartment Life, the evil witch spell Vivificus Zombiae will resurrect a dead Sim as a zombie. Babies, toddlers, and children cannot become zombies under any circumstances. Pets can become zombies, but their appearance and walk style does not change so this state is not readily apparent with them.

A Sim who is revived as a zombie will return with a blue-grey skin-tone and distorted facial features, a fixed personality (Outgoing 4, Active 3, Playful 1) and lose most, or all, of their skill points. The zombie Sim will have lowered daily and lifetime relationship with the Sim who brought them back as a zombie. Zombies cannot walk, skip, or run — they move with a slow shamble and will droop their heads, though they will walk up and down stairs normally. Zombies are also sterile and cannot conceive children. Their hygiene will decay more quickly than that of normal Sims, and other Sims may show disgust when a zombie is in their presence. They will occasionally think about brains, but it is not possible for zombies to actually consume them or convert other Sims into zombies.

Zombies are immortal and will never age, except for one specific situation: Teenage zombies are eligible for the Undead Educational Scholarship (worth §1500) and are able to go to college, at which point they will become young adults, and will become adults when returning home.

There is no in-game cure for zombiism; the changes are permanent. Third-party mods and tools such as InSimenator or SimPE can be used to reverse the life state.[1] A zombie's personality can be altered with the Sim Modder debug object, and zombies can become pregnant through testing cheats, though any children they give birth will be normal Sims and not possess any zombie attributes.

The PSP port of TS2 includes a mini-game in which the player can whack zombies in a whack-a-mole style in Paradise Place called Smack-a-ghoul which can make the player nauseous. Additionally there are zombies in the graveyard behind the Meetinghouse in Deadtree which will lower the player's sanity if the player gets too close. The player character cannot become a zombie in this game.

Zombification in The Sims 3: Supernatural is mostly featured as a temporary condition, and not a full life state. There are several ways for Sims to become a zombie: Sims are able to transform into zombies by drinking an elixir, and can be restored to their normal state by drinking another potion; Sims who are bitten by a zombie will become one themselves; Sims who eat the quick meal Brain Freeze a la Mode have a chance to become a zombie after finishing the meal; A witch can cast the Reanimation Ritual at a tombstone to bring the deceased Sim back as a zombie. Babies, toddlers, children, and pets cannot become zombies under any circumstances.

Zombies have green-grey skin, distorted facial features, and black eyes. They move with a slow shamble and will attempt to attack and bite other adult and elder Sims. Zombies will also attempt to consume any plants on the lot. Zombies are unable to WooHoo, and will dance to any active stereos on the lot. Pets dislike zombies and will often exhibit negative behavior towards them.

Random inactive Sims will become Zombies every full moon of the lunar cycle. Zombie Sims will have the "Zombified" moodlet (-30 Mood), and will remain in this state for 48 Sim-hours. The only interactions available to zombies are "Arghhhh", which will scare Sims, and "Braiiins", in which the zombie attempts to attack and convert another Sim. A Sim who is bitten will collapse and be pulled below ground, before rising again as a zombie. Supernatural Sims are unable to become zombies through being bitten, but can still become zombies through use of elixirs or the Reanimation Ritual spell. Disabling the lunar cycle will prevent zombies from being randomly generated in the game.

Zombification can be cured through a few different methods: The Cure Elixir and Potent Cure Elixir will cure any alternate life state, including zombification; Witches can cast Sunlight Charm to restore a zombie to a normal, living state; Zombies who are attacked and defeated by a Peashooter will fall to the ground and return to normal; Zombies cannot enter through the Door of Life And Death, but the monster that lurks below the doormat may pull them under and fling them back out as a cured Sim. Additionally, as zombification is tied to a moodlet, removing the moodlet through any means will effectively cure the Sim.

The Peashooter is only available as exclusive content with The Sims 3: Supernatural Limited Edition, and is a reference to the PopCap game, Plants vs. Zombies.[2] They can be used to defend a lot, as all zombies will try to attack them first before destroying any garden plants. Peashooters can fail, resulting in the zombie destroying it and proceeding to attack garden plants and other Sims unimpeded.

Retrieved from "https://www.thesimswiki.com/w/index.php?title=Zombie&oldid=959015"
Categories:
Hidden categories:
Cookies help us deliver our services. By using our services, you agree to our use of cookies.