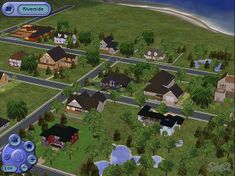 Screenshot of Riverside, one of the Unreleased neighborhoods.

There have been several neighborhoods made by Maxis and Electronic Arts for The Sims, The Sims 2, The Sims 3 and The Sims 4 that were developed but ultimately never made available to the public. Riverside and Waterside were used in pre-release previews of The Sims 2 but did not ship with the game, and other neighborhoods are referenced in the game files. Two incarnations of Sunset Valley were made, but due to the delay of The Sims 3's release, were redesigned. The Sims 4 was to originally feature a third world, Windenbourg, but was scrapped and eventually remade for the Get Together expansion.

The Sims ships with only one unnamed neighborhood. 7 more are added in the Livin' Large expansion pack though they are all identical in layout and still lacked names. However, during development the singular neighborhood did once bear the name 'Happy Acres' as shown in this video which shows off a build made June 4th 1998. Happy Acres had a completely different layout from the final neighborhood, different houses, and different sims living within it.

The layout of Happy Acres was not the simple loop as seen in the final game but rather contained more cross streets, intersections, and even lots that would be bordered by roads on 3 sides.

Instead of the iconic Newbie and Goth families, Happy Acres was the home of Mercades, Samantha (or just Sam), and Ross who all lack last names from what is known.

There are 14 neighborhoods found in the game files, they are:

Two lots are referenced in development files that do not exist in the final game:

Riverside was the original neighborhood that was to ship with The Sims 2 base game, but was removed during development. It is believed that the Sims that appeared in various video previews for the game may have been the inhabitants of Riverside. The neighborhood terrain template for Pleasantview is actually the terrain for Riverside, suggesting that the road layout was altered and the terrain template repurposed for Pleasantview.

Don, Sarah, and little Alex settled down in Waterside. Sarah wants a bigger family, but Don still craves the romance of his youth. Can you hold this family together, or will these Sims just grow apart? 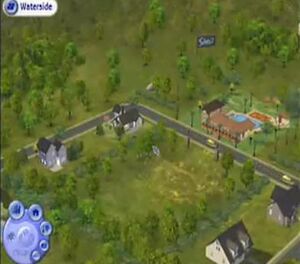 A screenshot of Waterside, showcasing the Baxter's house and multiple empty houses.

Waterside was a neighborhood used for previews of The Sims 2, and was created by producer Tim LeTourneau. According to development notes inside thumbnails_family.txt it was intended to ship with the game alongside the other three neighborhoods. lotSpeck.txt indicates that a Speck family were meant to also reside here, in a lot called "Little Charmer - 1BR 1BA"

It is home to the Baxter family, Virginia, Dina, Laura, and Tina. The neighborhood description entry for Waterside can still be found in NeighborhoodManager.package, though unlike Riverside, the text strings are missing. Several lots seen in Waterside were reused elsewhere in the game, such as in Pleasantview, and as pre-made lots in the Lots and Houses bin. Don Baxter and Dina were seemingly reworked into the Pleasantview Sims Don Lothario and Dina Caliente, respectively.

An edited aerial view picture of Waterside appears as the loading screen background when launching The Sims 2.

A recreation of Sedona, produced by the "Hood Building Group", can be downloaded here.

Very little is known about Lakeview. The only evidence of its existence is an unused camera fly-through associated with the name. It was possibly an early incarnation of Riverside or Pleasantview.

Hidden within the game are a number of neighborhood camera fly-throughs that are not used, but are still associated to specific neighborhood names. It is possible to enable these for use for any neighborhood by simply renaming it to one of the following:

As the flythroughs follow pre-determined coordinates, a neighbourhood's terrain may not be ideal for them. The camera might clip through terrain and lots. Europa's fly-through does not exactly fit the terrain for Veronaville, suggesting that it was modified significantly during development. The first scene of Lakeview's fly-through causes terrain to partially disappear for unknown reasons. 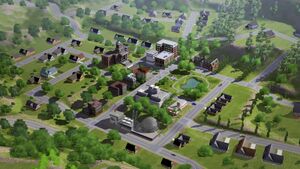 Sunset Valley went through several incarnations throughout development, which can be seen in early pre-release screenshots and videos for the game. One known version was made in March 2008 but was redesigned. Then the second was made after that and was supposed to ship in February 2009 but was delayed. 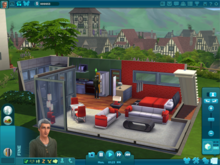 Early screenshots of The Sims 4 featured a Tudor-themed world known as Windenbourg, but was scrapped and did not ship with the game. The concept and some assets for this world were repurposed for Get Together's Windenburg. One early screenshot depicts an area resembling The Summer Home in Windenburg's countryside, suggesting the layout was partially kept for the final version.

Shared concept art of The Sims 4 reveals a conceptual, coastal beach world called Rose Beach. It features a large beach, a cave entry and expensive houses on top of the cliffs. The world was not made and there are no plans to ever create it.[3]

Retrieved from "https://www.thesimswiki.com/w/index.php?title=Unreleased_neighborhoods&oldid=957462"
Categories:
Hidden category:
Cookies help us deliver our services. By using our services, you agree to our use of cookies.