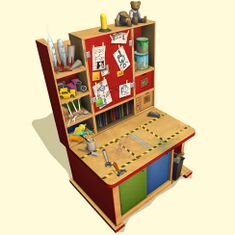 Toy Making was introduced in Open for Business, allowing players to run toy stores and giving a wider range of fun objects. These are usually for children and toddlers, though some can be used by older Sims. When a Sim starts making a toy, the player can customize its appearance; there are several choices for each toy. Gaining a badge level allows a Sim to make one or two new types of toys. High mechanical skills help with this badge, and creativity can also be helpful.

A toy making station, The Titanic Toy Machine, is featured in The Sims 3 Store, as part of the additional set from purchasing Midnight Hollow.

Pet Bricks are the simplest toys. There's no risk of failure in making them, but they're also cheap to sell and don't do much. Sims can interact with the bricks, teaching them tricks and having them perform tricks for other Sims, who, depending on personality, will either play along or laugh.

The Little Heroes Fire Truck is a simple toy that raises Fun. The only option Sims have is to play with it. It has no evil version. 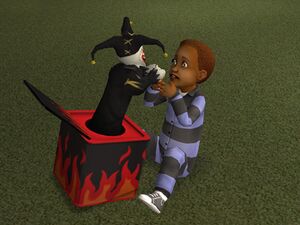 Melody Tinker gets scared by an evil Clown-in-a-Box.

A Clown-in-a-Box is a jack-in-the-box toy. When played with, it releases a clown when the crank is turned. The evil Clown-in-a-Box has a flame pattern and when used will scare the Sim using it, causing a drop in fun and comfort. It will also cause the bladder need to plummet forcing the Sim to get to a toilet instantly or they will wet themselves. However, it is said that mean Sims actually like the evil Clown-in-a-Box. 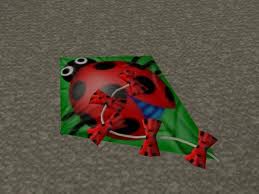 A normal Brinks' Kite sitting on the floor.

With this toy, Sims can literally "go fly a kite", if there's enough room and the wind is right. The evil version is metallic, has red eyes, and attracts lightning. 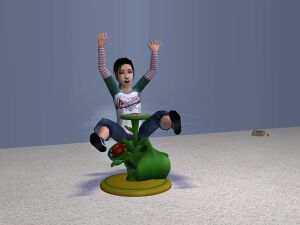 A child playing on the Twirl, Spin, and Wobble. 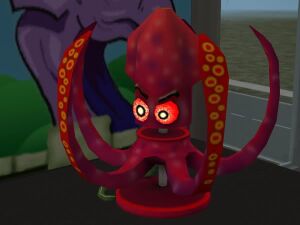 Up to four Sims can use this water sprayer at once, and others can watch for fun. If it is used outdoors, it will not leave puddles. If Pets is installed, dogs who have been trained to be clean can be told to wash themselves in it. Dogs who have been trained to be playful can also be told to wash themselves in it, as dogs seem to think the Water Wiggler is fun. A Servo may try to use this toy autonomously. While this will not necessarily cause the Servo to run amok, it is still a bad idea, as it will drain the Servo's Power motive. (This mod at Mod The Sims will keep Servos from autonomously playing in a Water Wiggler.)

The evil version is a bright red squid that will leave puddles and spawn weeds even when it is used outdoors.

Toy making returns to The Sims 3 via The Titanic Toy Machine, which can be bought in The Sims 3 Store for 545 SimPoints. It is also included in the gold version of Midnight Hollow. Sims can craft toys that are not available in buy mode using this machine. Crafting toys is free, however the process can also fail, resulting in creation of a broken toy object, called as "Misfit Monstrosity". All the toys are craftable from the start. Sims can choose to create toys individually or randomly.

Similar to the mechanic in The Sims 2: Open for Business, players can create toy stores and sell crafted toys using the Savvy Seller's Collection, which also comes with Midnight Hollow.

Baby Bricks-A-Lot is a toy that looks very similar to "Sir Bricks-a-Lot" from The Sims 2: Open for Business, but this is just a regular toy that can only be played with, unlike its The Sims 2 counterpart.

File:BabyPlayMat.jpg
A baby Sim playing with a Baby Play Mat.

Baby Play Mat can only be used by baby Sims. To be able to use the mat, babies must be placed on the play mat by an adult. The play mat raises all the needs of the baby except social.

File:ToyMachineDrums.jpg
A toddler playing with a drum.

Bang It Kids Drum can be used by toddler and child Sims. Using this toy raises the drums skill up to level 3[1], and it can result in a bad moodlet for other Sims around.

File:TS3CraftActivityTable.jpg
A child and a toddler playing with Block n' Roll.

Clown-in-a-Box can be used by child Sims. Similar to the Clown-in-a-Box in The Sims 2, a clown is released when the crank is turned. This interaction has two possible outcomes, and the Sim playing receives a moodlet according to the outcome.

File:TS3CraftDollHouse.jpg
A child playing with Fashion Fortress of Justice.

Fashion Fortress of Justice is a dollhouse.

File:TS3Kite.jpg
A Sim playing with a kite.

Kites can be used by all Sims aged child and older. When there is enough room, Sims can perform "Play With Kite" with interaction which raises fun need. Similar with the kite from The Sims 2, it has a chance to attract lightning.[1]

File:ChildRemoteRobot.jpg
A child playing with a robot.

Remote Control Robot Uprising V1.0 can be used by toddlers and children. When used by a toddler, it behaves like regular toys from a toy box. However, when a child uses the robot, the Sim controls the robot with a remote controller.

File:RemoteRaceCar.jpg
A child playing with a race car.

Zoom Faster Remote Racer can be used by toddlers and children. Similar to "Remote Control Robot Uprising v1.0" toy, when used by toddlers, it behaves like a regular toy, but child Sims use a remote controller to control the car.

Retrieved from "https://www.thesimswiki.com/w/index.php?title=Toy_Making&oldid=955275"
Categories:
Hidden category:
Cookies help us deliver our services. By using our services, you agree to our use of cookies.