StrangeTown Monty (STM) is a Sims 2 Machinima Series by AldoHyde, based off Sims 2 default neighborhoods Strangetown and Veronaville. It has Simlish voiceovers with English subtitles. Sims 3 footage is occasionally used, especially for flashbacks. The show features mainly premade characters, with some of the author's own mythology.

Many Veronaville residents mysteriously die in the Veronaville Disaster, leaving Monty siblings Antonio and Bianca the only adult survivors to unravel the conspiracy. Antonio's task requires him to remain in Veronaville, while Bianca heads to Strangetown. This decision becomes easier for Bianca after discovering that her long-time crush, Kent Capp, was among the fatalities.

Bianca is intelligent, friendly and trusting, which gives her a positive attitude when meeting most of the Strangetown residents. But what will the more shady figures in Strangetown want from her? Will she discover the true cause of the Disaster that killed off most of the Montys and Capps?

STM is a scientific conspiracy and psychological drama. It is loosely based off concepts from Fringe (Fox Science Fiction TV Series), adapted for the Sims Universe. STM is a gray world, shaded with Fringe Green and Hyde Blue. So STM is more like "Strangetown Fringe Hyde" than "Strangetown Strangetown".

The story does not focus equally on all Strangetown and Veronaville households / characters. Instead, the ones who inspire the author will be in the main story arcs, and the rest will be in the background. There are also a small number of CAS sims, but they are mainly minor recurring characters.

This show does not feature conventionally attractive (or "pretty") sims. Instead, it thrives on a strong script and thought-provoking dialogue. Expect unconventional portrayals of situations and characters, as well as experimental storytelling methods. 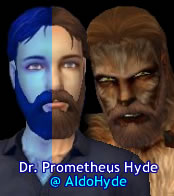 Most of the characters are pre-made from Strangetown and Veronaville. The most obvious exception is the Watcher, Dr. Prometheus Hyde, CEO of Hyde Dynamic, a science facility. The author inserts his sim-self to prevent others from copying his show, and to portray a "Watcher-Sim Dynamic", where characters are being played by a Sim "god".

Fans may also take the STM Quiz, which contains material up to and including STM 2.07(B).

Retrieved from "https://www.thesimswiki.com/w/index.php?title=Fanon:StrangeTown_Monty&oldid=749242"
Categories:
Cookies help us deliver our services. By using our services, you agree to our use of cookies.