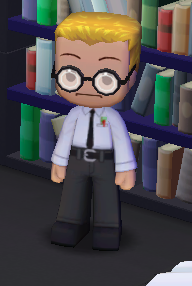 Ian Arneson is a Sim that appeared in MySims for Wii. He is a young inventor, and this is his bio:

"Ian Arneson is a quiet, well-mannered boy. Why? He was raised in a library by his Aunt Elmira!".

Ian loves Geeky, likes Tasty and hates Fun. He is an uber nerd who was raised by Elmira Clamp (his aunt, thus making him probably the great-nephew of Mrs. Crumplebottom). He often talks about machinery and has a very sophisticated, intelligent way of speech. Despite his academic appearance, he enjoys geeky things.

A part of the: Crumplebottom Family.

Retrieved from "https://www.thesimswiki.com/w/index.php?title=Ian_Arneson&oldid=446278"
Categories:
Cookies help us deliver our services. By using our services, you agree to our use of cookies.