Not to be confused with Miss Crumplebottom.

Mrs. CrumpleBottom is an NPC featured in The Sims 2: Nightlife. She frequently visits Downtown lots and is usually considered an obstacle in the lives of Sims.

Mrs. CrumpleBottom is a very old-fashioned, stern, and strict woman who appears to abide by a moral code from the Victorian Era. She detests when two Sims have any romantic interactions in public. When Mrs. CrumpleBottom sees any of these actions taking place on a community lot, she will promptly scold the Sims or beat them with her purse.[3] If a Sim innocently wanders out in his/her underwear or bathing suit, Mrs. CrumpleBottom will repeatedly lecture them until he/she changes back into his/her everyday clothes. This could be an issue if the player makes a public pool as a Downtown lot. Mrs. CrumpleBottom loves to knit, and she will usually knit as an idle animation when she's not doing anything; in fact, it was revealed that knitting utensils are one of the many things inside of her purse, others including lint, stones, and a portrait of her great aunt.[4]

Mrs. CrumpleBottom behaviors is fixed and cannot be changed. While making her part of a household will cause game corruption and is not recommended, if a player does this with the Tombstone of Life and Death and tries to change her personality with the Sim Modder, her behavior will not change. Even with full niceness, she will still lecture Sims for showing affection, showing too much skin, or slacking off.

Mrs. CrumpleBottom, upon viewing in SimPE, is treated as an object. Her data is located in objects.package in the game files. Thus, Mrs. CrumpleBottom cannot be interacted with in any way. Any attempt to interact with her will result in the Sim being lectured. Mrs. CrumpleBottom can be bitten by a vampire, upon which Mrs. CrumpleBottom will have the same stricken gesture as any other bitten Sim, however she does not convert and remains the same. As this autonomous interaction alters the objects.package file, game corruption will occur to the current and every subsequent neighborhoods being played, which can only be resolved by reinstalling the game. It is determined that she is an object, akin to all universal NPCs in the game.[5]

If the player has The Sims 2: Seasons expansion pack, a Sim may wish for Romance from a wishing well. There is a chance that the wish will fail, and Mrs. CrumpleBottom will crawl out of the well and hit the Sim with her purse. When she attacks the Sim, they may be furious with her if she wins. 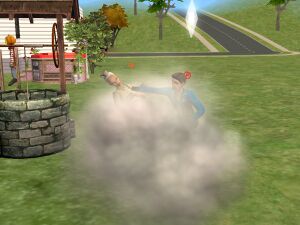 There are six known ways to avoid Mrs. CrumpleBottom: 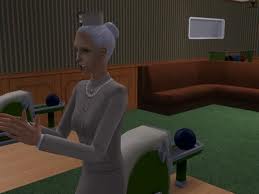 She loves bowling more than she hates love, so romantic Sims are safe in bowling alleys. Once she starts to bowl, she will never stop. She also loves to play poker, and will play indefinitely unless she is interrupted. (This is because she has no motive decay.) Therefore, it can be useful for the player to have Sims on dates go to lots with poker tables or bowling alleys. She also loves to drink, and will usually spend most of her time at a bar when there's one on a community lot.

Note
Sims who are at a poker table or bowling lane with Mrs. CrumpleBottom may appear to meet her and build a relationship with her. Since relationships are stored at the neighborhood level, this should not cause changes to her character file.

If the player has The Sims 2: Bon Voyage expansion pack installed in the game, a new character is introduced. The Unsavory Charlatan, a venturing scam artist, just seems to be attracted to sweet ol' Mrs. CrumpleBottom and if both of these characters are in the same lot he will try to have his way with her and serenade the "sweet" old lady, in which he'll end up receiving one of Mrs. CrumpleBottom's famous purse-whippings. These ridiculous interactions may give the player some time to finish up in the lot and head home to safety.

Mrs. CrumpleBottom almost always wears her signature outfit. This includes a long, straight Appe dress with a button-up overcoat, along with tight shoes, pearls, a pillbox-hat with a small daisy pinned on, and her large, dark purse. Her dress is a tanned cream color. Her hair is grey and is always tied in a very tight bun. Her hair and outfit are unavailable for female elders without the testingcheatsenabled cheat.

In the spin-off game, MySims, Mrs. CrumpleBottom makes a cameo as a costume. There is a dress that resembles hers, along with a hat with hair in a bun like hers. There are also eyes that look like those of an elderly person along with a craggy mouth. It is mentioned in Elmira Clamp's profile that she has an "Auntie Crumplebottom". Some people believe that her auntie is Mrs. CrumpleBottom, although this causes retroactive continuity wherein MySims is a prequel to The Sims 3,[6] which is a prequel to The Sims 2.

In The Sims 3, there is a purchasable book named "The Crumplebottom Legacy". This may be a reference to Mrs. Crumplebottom and her relatives.

One question that is often wondered about by inquisitive simmers is "If her name is Mrs. CrumpleBottom, then who was her husband?" There are many rumors around the community, and here are some of the most prominent:

Warning
DO NOT, under any circumstances, attempt to add Mrs. CrumpleBottom to a family, try to turn her into a supernatural creature, such as a vampire,[8] a werewolf or a witch, make her selectable, or tamper with her in SimPE in any way or form. Doing so will cause game corruption, fixed only by uninstalling and reinstalling the game.

Retrieved from "https://www.thesimswiki.com/w/index.php?title=Mrs._CrumpleBottom&oldid=966310"
Categories:
Hidden category:
Cookies help us deliver our services. By using our services, you agree to our use of cookies.