Kent Hackett is a Sim in The Sims 2 for Game Boy Advance and Nintendo DS.

Kent appears as one of the antagonists and can be found at the old warehouse. In the episode "Blackout" the player finds out that he starred as Chaz Dastard on the television show "Chaz Dastard's Intergalactic Star Safari," which Ava Cadavra is a fan of. In "Blackout!", he stole all of the nuclear rods from the power plant and had planned to hand them over to Emperor Xizzle.

During "A Brand New Scent," Emperor Xizzle will task you in getting some actor's makeup from Kent. Kent will have some makeup, but he will say that it had expired in 1986(which would be 19 years expired given the release date of the game).

He has to do with the hidden want in "There Was This Mummy," it being that the warehouse is on fire and the player will have to extinguish it. Kent will explicitly mention that he was sure to save some of his merchandise "Chaz Dastard's Intergalactic Star Safari" in hopes of "selling it" one day.

During "The Doomed Earth," Kent Hacket is pressuring Jebediah S. Jerky to sell his farm to him. The player will have to give 500 simoleons to Jebediah in order to avoid him selling his farm. Kent will be mad at the player for foiling his plans, and Jebediah will wish embarrassment on Kent.

Kent Hackett is the one who convinced Ara Fusilli, Kayleigh Wintercrest, and Guiseppi Mezzoalto to come to the reunion, but they need transportation, which Kent doesn't have. The player will have to ask Frankie Fusilli to provide transport for them. Kent also is mentioned to have been given Kayleigh's old job by Mayor Xizzle, though he does not enjoy it.

Kent plays no significant role in the game's plot. He is a guest in the hotel and can be checked into one of the free rooms. 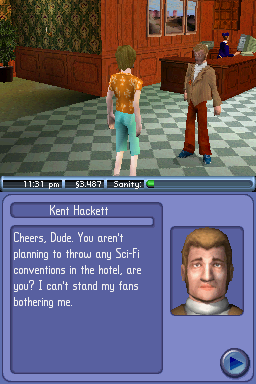 His secret is that he has regularly watched re-runs of his own TV show "Chaz Dastard's Intergalactic Star Safari" for the last 12 years.

Retrieved from "https://www.thesimswiki.com/w/index.php?title=Kent_Hackett&oldid=962405"
Categories:
Hidden category:
Cookies help us deliver our services. By using our services, you agree to our use of cookies.