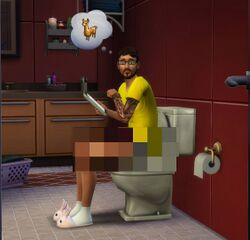 Multitasking is a feature that appears throughout The Sims series, although it was first heavily developed and expanded in The Sims 4, of which it was one of the advertised new features along with emotions and the gallery.

Multitasking Sims can perform two or more tasks simultaneously. Examples range from simple things such as resting on a bed while reading a book or having a conversation while dining, up to complex piled-up interactions such as running on a treadmill, talking with another Sim and watching television all at once. This usually gives the advantage of satisfying multiple motives simultaneously.

In The Sims 2, Sims that are relaxing on a bed can be instructed to read a book or simply daydream. In The Sims 2 for console, Sims sitting on a toilet can be directed to play a video game on a handheld device or read a magazine. They may also autonomously pull out a newspaper and read it, fulfilling both the fun and bladder needs.

In The Sims 3 and The Sims 4, Sims can use a handheld phone while on a chair, sofa or couch. They can even use it while on a toilet.[TS4]

In The Sims 4, Sims can talk to another Sim while preparing a meal, moonlighting at a bar, sitting on furniture or the edge of a pool, running on a treadmill, and when using a computer.

Retrieved from "https://www.thesimswiki.com/w/index.php?title=Multitasking&oldid=876689"
Categories:
Hidden category:
Cookies help us deliver our services. By using our services, you agree to our use of cookies.