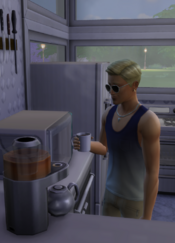 A Sim drinking a cup of Calming Chamomile, a type of Tea present in The Sims 4.

Tea is a drink featured in The Sims: Makin' Magic, The Sims 2: Bon Voyage, The Sims 3: University Life, The Sims 3 Store, and The Sims 4.

Tea was originally introduced in The Sims: Makin' Magic.


Energy: 2
Can only be used by adults

Tea was reintroduced in University Life. Sims can brew various kinds of tea, each having a different effect, similar to juices in The Sims 2: Seasons.

The Old Miller Tea Time Tea Set is available as part of the Brunch at the Old Mill set in The Sims 3 Store.

In The Sims 4, tea can be used to achieve various emotional states when drunk. It functions similarly to coffee, but does not stave off loss of energy. There are six types of tea in the base game; Spa Day, Cats & Dogs, Seasons, and Jungle Adventure each introduce one more type of tea. Tea can be brewed with the "Tea Magic Personal Brewer", which can be purchased in Build Mode for §275. Brewing once provides three cups of the chosen tea type, and it will, like any other perishable consumable, spoil after 10 hours.

The tea names are references to actual tea, in the real-world; some have an altered name, while others have the actual name in-game.

Retrieved from "https://www.thesimswiki.com/w/index.php?title=Tea&oldid=967014"
Categories:
Hidden category:
Cookies help us deliver our services. By using our services, you agree to our use of cookies.