Aquariums are a type of object that allow Sims to own pet fish. They can be bought in buy mode (or build mode, in The Sims 4) and have appeared throughout The Sims series.

In the original release of The Sims, the only way Sims could have any sort of pet was to have the Poseidon's Adventure Aquarium. As long as the fish were fed daily, and the tank was kept clean, the fish would live indefinitely. The Hot Date and Superstar expansions added large 1x3 aquariums, but these were purely decorative and did not require maintenance. Unleashed added a goldfish bowl that functioned similarly to the original aquarium, though it treated the fish as a small pet that had to be purchased separately while on a community lot.


Room: 1
Note: The goldfish is a small pet that costs §15, and must be bought on a community lot. The bowl must also be placed on a surface.

The Sims Bustin' Out features two aquariums: a regular aquarium that requires regular feeding, and the "Manila 1000" Marine Aquarium that is self-sustaining, unlocked by upgrading the kitchen at Tinsel Bluffs.

In The Sims 2 base game, the only way Sims could have any sort of pet was to have the Aquabox Five-Gallon Aquarium. The Pets expansion pack added a 1x3 saltwater aquarium called Mr. Maritime, and changed aquariums so that cats could watch them. When bought, these aquariums are empty, and can be stocked by clicking on them and selecting the "Restock" option. Stocking the Aquabox costs §35, while stocking Mr. Maritime costs §300, and Sims may stock them autonomously. The fish must be fed every 48 hours, or they will die. Sims can feed the fish as often as they like, although overfeeding the fish will dirty the tank faster.

Unlike The Sims, Sims in The Sims 2 will not react when fish in an aquarium die, and the game will not give the player any notice that the fish have died. When told to restock the aquarium, Sims will scoop the fish out of the tank, take them to what they consider the nearest toilet, and flush them away, then return to the tank and add new fish, for which they will be charged.

Apartment Life added a large 4x4 aquarium, which was primarily decorative and did not require maintenance, although Sims and cats could still watch it. It is also by far the most valuable modestly-sized object in the game.

Aquariums are considered a decorative object and are located under said category in buy mode. 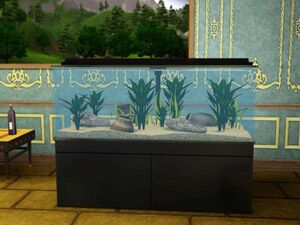 An aquarium as found in High-End Loft Stuff

In The Sims and The Sims 2, aquarium fish were not separate objects. In The Sims 3, however, they are. Fish, as well as other aquatic creatures like frogs, can be caught by fishing in ponds, rivers, lakes or oceans and placed in bowls or tanks. A bowl holds one fish; an aquarium holds six, which allows fish to reproduce.

If fish are not fed daily, death music will play and the fish will die of starvation (although the Grim Reaper doesn't come). In some games, the fish tank can also turn green to warn the player that the fish need feeding.

Note: It must be placed on a surface.

All My Fishes Aquarium[edit | edit source]

In The Sims 4, aquariums allow Sims to own pet fish. Aquariums can store fish caught from fishing, but there is also the option of buying fish by clicking on a bowl in live mode and selecting "Purchase Fish...". Fish that can be purchased in this way are a goldfish (for §20), a guppy (for §15) and a tetra (for §25). The Gumber Fesh Bow and The Boneyard bowls were part of a Trick or Treat Challenge in 2015, and they also have unique buyable fish that are not available in other aquariums.[1]

Fish placed in small aquariums can be named, but do not need to be fed or cleaned up after. Large aquariums can store up to six fish.

This is the only bowl that allows Sims to buy Gummie Guppie fishes.

This is the only bowl that allows Sims to buy "Captain Bones" Bonefishes.

Swimming with the Fishes[edit | edit source]

Retrieved from "https://www.thesimswiki.com/w/index.php?title=Aquarium&oldid=959384"
Categories:
Hidden category:
Cookies help us deliver our services. By using our services, you agree to our use of cookies.