The Bell family is a pre-made family residing in Desiderata Valley that came with the FreeTime expansion pack. The family consists of an entertainer Issac, his wife Hannah, and son Daniel. Hannah's sister, Sharon Wirth, also lives here. She stays with the family because she has financial problems. According to the family bio, Sharon's coming apparently caused a disturbance in the family, though there doesn't seem to be anything wrong when the family is played. Her relationship with the members of the household is also fine. The disturbance could imply that Issac may cheat on Hannah with Sharon, though there is no evidence on this speculation.

The Bell family seems to have good relationships with the Aspir family. Hannah is also Elizabeth Aspir's alleged BFF, judging from their memories, but not from their relationship panel. It appears that, even though Sharon is the one who stays at Hannah's home, she has a larger role in the storyline as she is a newcomer (although memories indicate she has known most members of the neighborhood), and has already had a romantic interest.

The households seem to be quite artistic. Daniel loves Arts and Crafts, and he has developed some enthusiasm for it, as well as some skills. Issac is an entertainer, and he loves Film and Literature. Both Sharon and Hannah are ballet dancers, and there is a ballet room in the house where they can exercise ballet together. 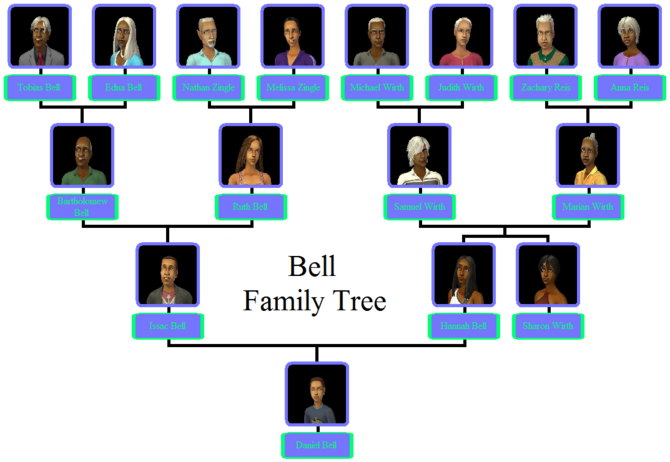 Retrieved from "https://www.thesimswiki.com/w/index.php?title=Bell_family&oldid=361940"
Categories:
Cookies help us deliver our services. By using our services, you agree to our use of cookies.